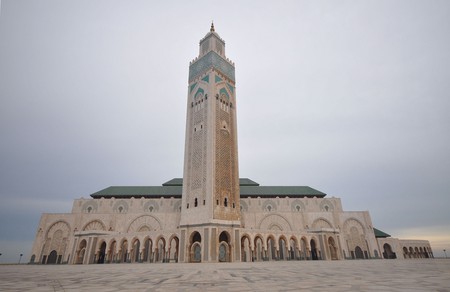 Its minaret soaring 210 metres – or 60 stories – over the Atlantic Ocean, makes the Hassan II Mosque in Casablanca, Morocco the tallest minaret in the world, and the tallest buiding in Morocco. Built in just seven years during the reign of King Hassan II to be the most ambitious structure ever built in Morocco, the Hassan II Mosque is one of only two mosques in the country open to non-Muslims. With space to accommodate 25,000 worshippers inside, the surrounding outdoor courtyards provide space for an additional 80,000 people.

King Hassan II stated in a speech on July 9th, 1980, that he wanted ‘to build this mosque on the water, because God’s throne was on water. Therefore the faithful who go there to pray, to praise the creator on firm soil, can contemplate God’s sky and ocean’. Hence its location on the Atlantic Ocean, which can be seen through the glass floor inside.

Starting work in 1986, some 6,000 of the Kingdom’s most prestigious craftsmen, using the finest materials from across Morocco – cedar wood from the Middle Atlas Mountains, marble from Agadir on the southern Atlantic coast – worked around the clock to ensure the building was completed for August 30th, 1993, the eve of prophet Muhammad’s birthday. 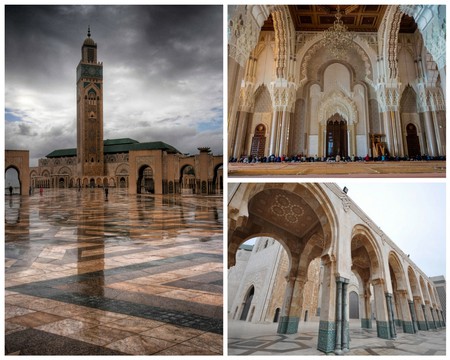 Wandering around the exterior provides an up-close look at some of the finest zellige (tilework) in pale blues, ivories and yellows. Don’t miss the extravagant prayer hall where the retractable ceiling opens up, providing worshippers with gentle ocean breezes.

Non-Muslims must join a group tour (several tours are offered throughout the day, but times change depending on the prayer schedule) and dress respectfully in order to gain access to the prayer hall, ablutions room and hammam.