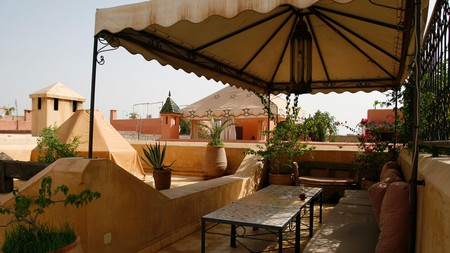 Marrakech is famous for its thriving markets, bustling restaurants and the many unique crafts which are available in the city. It is a tourist haven which combines the best of Moroccan culture and tradition with modern amenities and a relaxed ethos. Nowhere is this more evident than in the city’s best riads, traditional hotels which offer comfort and culture in equal measures. 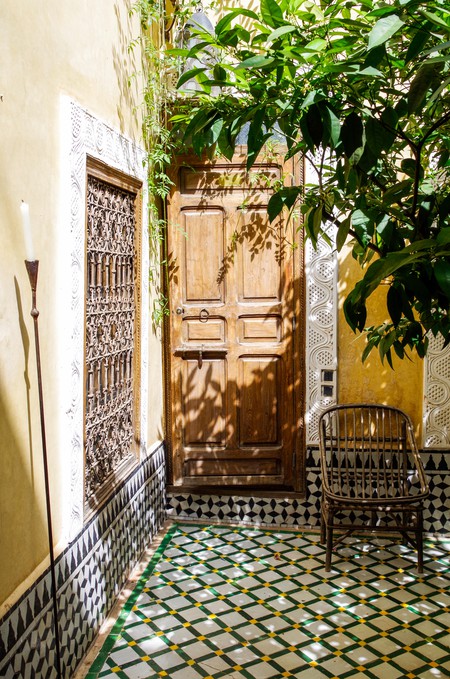 Marrakech is seen as two cities standing side by side: the old town within its historic walls and the new town with its districts of Guéliz and l’Hivernage, which are intersected by Avenue Mohammed VI. Many treasures can be found within the old city walls, such as the Koutoubia, the great square of Jemaa el Fna and the Menara. Today it has become a city of artists and a temple to design. The cityscape is a vivid contrast in colors with an array of architecture set against the snow-capped peaks of the High Atlas Mountains. We recommend ten riads — traditionally inspired homes with an interior garden acting as the focal point — in which to experience Marrakech.

Hotel, Riad
4.2/5 (33 Reviews)
View Rooms
With high ceilings and colorfully painted interiors, each room at the Dar Darma overlooks the patio. It’s one of the common areas of this beautiful riad which also include the Moroccan lounge, the hall of Arches and the fireplace lounge. The top of the building houses terraces overlooking the city and the Atlas Mountains and there is also a swimming pool for relaxing in the mid-afternoon heat. Complete with its own hammam and library, Dar Darma is just a few minutes’ walk from the souk.
More info

Riad, Hotel
4.4/5 (10 Reviews)
View Rooms
This eight bedroom riad has been restored by French owner Jocelyne Despin and is built around two central courtyards. Riad Les Yeux Bleus is located just inside the medina (the old part of the city) in a calm and quiet neighborhood. Its interior features arches and galleries, which are reflected in the waters of the small swimming pool in the central courtyard. The second patio, which is more private, presents a beautiful marble fountain. The riad also has a terrace with views of Marrakech rooftops. Meals inspired by fresh food from the market can be prepared and served on the terrace, in the sitting rooms or near the pool.
More info

Hotel, Riad
Facebook
Email
Twitter
Pinterest
Copy link
Share
Map View
Riad Aguavia is situated in the Medina, near Bab El Khemis. Its owners Manel Moncusi and David Minguillon, both from Barcelona, restored this old riad and opened it to the public in 2008. In a traditional and quiet part of the town just out of sight of the hustle and bustle of the center, visitors can easily access the traditional markets and the Plaza El Fna on foot. Each of the six rooms at this riad looks out to the patio and pool located in the center.
Open In Google Maps
Médina Marrakech, Marrakech-Safi, 40000, Morocco
+212524386475
Visit Website
Give us feedback

Courtesy of La Maison Arabe / Expedia
View Rooms
La Maison Arabe is a much large compared to more traditional riads. This is one of the many modern riad hotels which have emerged in recent years. Its 26 rooms and suites are each filled with rich fabrics, hand carved furnishings, and traditional Moroccan finishes. There is one apartment which still follows the classic riad style called the Douiria, a private penthouse residence with three rooms and a suite with two large terraces.
More info

Riad
4.9/5 (34 Reviews)
View Rooms
With its own library and a log burning fire, Riad Noir D’Ivoire is dedicated to comfort. On the roof terrace, cushions lie inside a curtained, carved wood pavilion. Top features include a private jacuzzi attached to the three master suites and double sun beds. There’s also a pool, hammam, and even a gym. Every room is individually decorated with a mixture of Moroccan handicrafts and Syrian furniture inlaid with mother-of-pearl. In addition, the in-house chef creates traditional Moroccan dishes and North African classics.
More info 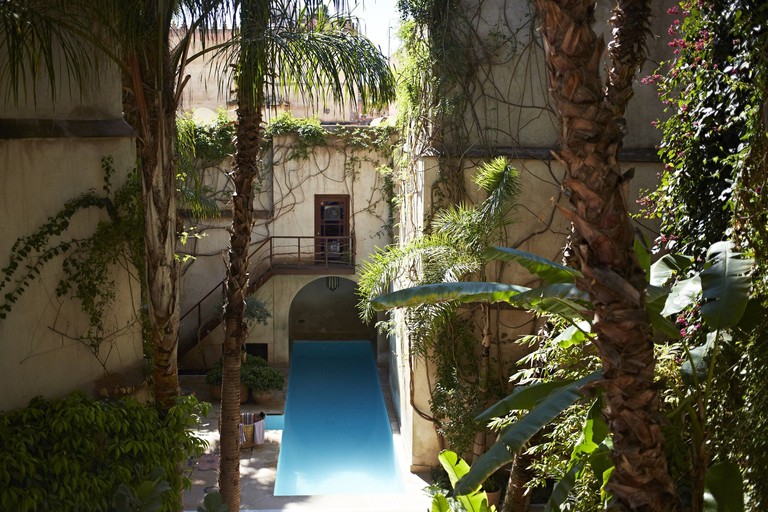 Courtesy of El Fenn / Expedia
Set on the edge of the oldest part of the Medina, Vanessa Branson, sister of Richard Branson, has created Ryad El Fenn. First opening in 2004, this riad uniquely mixes Moroccan style with western vintage design. Each of the 21 rooms and suites has been individually conceived with vivid colors, unique pieces of furniture and baths that are either claw foot, molded or sunken into the floor.
Open In Google Maps
2 Medina Marrakesh, Marrakesh-Safi, 40000, Morocco
+212524441210
Visit Website
Give us feedback

Hotel, Riad
Facebook
Email
Twitter
Pinterest
Copy link
Share
Map View
This boutique riad hotel is located in Mouassine, the oldest and most traditional Marrakech neighborhood, and it is only a short walk from the Marrakech souk entrance. Riad Snan13 offers five double bedrooms and one grand suite with a patio and a swimming pool. The terrace overlooks the city with incredible views over Marrakech’s Medina, Koutubia’s mosque and Dar el Bacha’s Palace.
Open In Google Maps
13 Derb Snane, Médina Marrakech, Marrakech-Safi, 40030, Morocco
+212524381997
Visit Website
Give us feedback

Hotel, Apartment, Riad
4.8/5 (17 Reviews)
View Rooms
Just a few steps from Jemma El Fna square, Riad Boussa is a four-bed riad in the Debachi area of Marrakech, to the east of the Djemaa el Fna and a ten-minute walk to the souks. The roof terrace – complete with sun loungers, a shaded sitting area, and the downstairs patio – offers guests a relaxing communal area. The owner also lives in the riad in a separate apartment, so is always nearby to help and share local knowledge. Each of the four bedrooms is en-suite and one offers family accommodation.
More info

Two French brothers bought a neglected riad from Marrakech’s influential Tigani family and transformed it into the Riad l’Orangeraie. Situated in the Mouassine district of the old Medina, a five-minute walk from the vibrant Djemaa El Fna, L’Orangeraie is a seven room townhouse with two expansive patios – one with fountains and aromatic flowers, the other with a mosaic swimming pool and hammam. Its roof terrace offers stunning views of the Atlas Mountains, and guests also have the option to dine here.