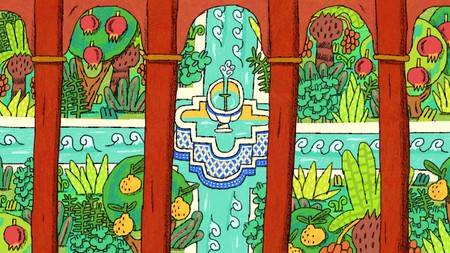 It might not look like it in the dusty streets, but the Marrakech medina with its earthen ramparts is an enormous walled garden intricately divided by a jigsaw of dwellings. This model of a garden city reflects deeply held Islamic beliefs about privacy, pleasure and the restorative power of nature.

Marrakech summers regularly top 40C (104F). By 10am it is already hot. By midday the sun strikes the paving stones of the Jemaa el-Fnaa with the ferocity of a hammer on an anvil and people flee the plaza, disappearing down shadowy alleys and vanishing behind heavy cedar doors to escape the relentless heat in secret riad gardens.

In such an unforgiving environment, the greenery of a garden is an incomparable luxury. In the desert, an oasis means life itself, and as Islam emerged in the desert, an Islamic garden represented an earthly analogue for paradise itself. Even the word paradise comes from the Persian pairidaeza, which means an enclosed garden.

This ancient concept of “paradise”, which dates back 5,000 years, combined with Quranic references to paradise as a garden flowing with four rivers of water, wine, milk and honey to become a central element of Muslim culture. In Marrakech, a city situated at the edge of the Sahara Desert, it takes on even more resonance and is part of the fabric of life itself. However, modern trends and increasing development mean the city now faces a challenge balancing tradition with modernity. 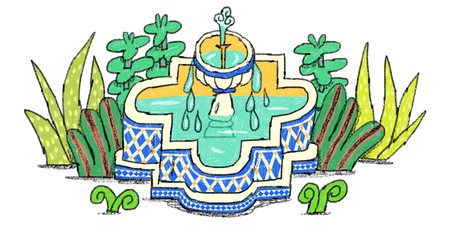 The art of living in the Islamic world

Riad Mena is an exemplary riad; that is, a house with an enclosed garden. Its courtyard is divided into four planted quadrants, known as chahar bagh, which mirror the Quranic vision of the fourfold universe, while the paths in between represent the four rivers of paradise. In the centre is the sahrîdj, a shallow basin with a fountain. It is the most important element of the garden, because as the Quran states, “God preferred water over any other created thing and made it the basis of creation” (Surah 31:30).

“This riad was owned by the Kabbaj family,” says Riad Mena owner Philomena Schurer-Merckoll. “They were courtiers who worked in the nearby palace of Moulay Idriss”. She sits on a sofa beneath the hand-painted ceiling of a deep bhou, a typical shaded seating area from which to view the garden. “The house was reserved for the women of the family, who would have spent most of their time inside, which is perhaps why the garden is such a feature,” she says.

A riad garden has both a functional and spiritual dimension. Fruit trees such as orange, date palm, pomegranate and olive offer sustenance and symbolise happiness, abundance, prosperity and peace. They are underplanted by aromatic herbs such as mint, rosemary, mustard and aloe, which are prized for their medicinal properties.

The garden is also predominantly green, the colour of Islam, although a few fragrant flowers such as jasmine are permitted to perfume the air. The courtyard is irrigated by the constantly burbling fountain that reminds visitors of the life-giving force of water, without which there would be no garden. As if to prove the point, a small honeyeater swoops down to drink from it. “The riad embodies the art of living in the Islamic world,” Schurer-Merckoll reflects.

But riads aren’t just a feature of domestic homes in Marrakech. The majority of the city’s historic sites are also inextricably linked to enclosed gardens. The Koutoubia Mosque has one. There’s a jewel-like garden at the heart of the Bahia Palace, where important guests were once received. In the riad of Dar Si Said, paths of glossy green and white tiles mimic the rivers of paradise while the central fountain is shaded by a pergola covered in hand-painted blooms.

According to scholars, the epic ruins of the 16th-century El Badi Palace are the epitome of the style. Ahmed el Mansour, who built the Badi, had his engineers devise a gravitational-flow system in order to fill the courtyard’s vast basins from underground khettaras (tunnels) that channelled water 50km (32mi) from the High Atlas. Here the lower level of the four gardens is exaggerated to 2.5 metres (8 feet) below the walkways so visitors can admire the blossom on the treetops and inhale their rising scent.

The presence of these riads in Marrakech’s finest palaces indicates the wealth and power of their inhabitants. Large gardens require an abundance of water, and the ability to control that water in a desert environment lent great prestige. But more than that, gardens are considered a blessing and speak to a central Islamic tenet that sees humanity occupy the position of khalifa, guardians of nature: “We have made you to succeed one another as stewards of the earth, that We might behold how you acquit yourselves” (Surah 10:14). 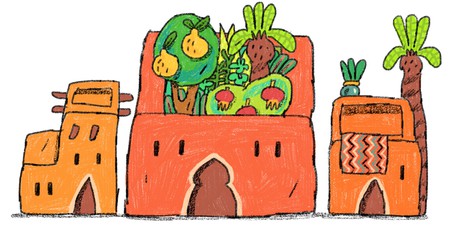 The caids who inhabited Le Jardin Secret acquitted themselves admirably as stewards of their magnificent garden. Having fallen into disrepair following the 1934 death of the last owner, Chancellor Mohammed Loukrissi, it has been painstakingly restored by award-winning landscape gardener Tom Stuart-Smith. It is also the only riad in the medina to retain its ancient irrigation system.

“The garden is carefully engineered to provide water at the right place and the right pressure,” says Stuart-Smith. In fact, Europeans learned a great deal from the expert hydraulic engineers and botanists of the Arab world. What’s more, this ancient know-how is increasingly relevant in water-stressed modern Marrakech. “Water is always at the heart of the riad garden, and Islam,” says Stuart-Smith.

Now that the system has been restored, water burbles around the garden down small channels. At points it is released into beds planted with symbolic species such as fig (a stoneless fruit reserved for the highest levels of paradise), olive trees (symbolising peace), date palms (a blessed and abundant tree) and pomegranates (representing unity in multiplicity). “[It is] one of the oldest traditions of garden-making in the world,” says Stuart-Smith, “a tradition that connects Le Jardin Secret to the gardens of Cyrus the Great in Persia 2,500 years ago”.

In the centre is a circular marble basin set in a square of multicoloured zellij (mosaic) tiles. This, too, holds layers of meaning. The white tiles represent God’s light; the blue, his hidden power; green is the colour of Islam; and yellow, the earth. The water in the fountain bowl spills over into a shallower basin, signifying the overflowing divine spirit. And the geometrically inclusive shape they form together represents the gate of heaven, the celestial circle set within the earthly square.

Le Jardin Secret is made more special by the fact that its 30-metre (98-feet)-high walls hide not one, but two interlinked gardens symbolising two different versions of paradise. While Stuart-Smith stuck faithfully to Quranic precepts and native species in the main Islamic garden, in the smaller exotic garden, he realised an Old Testament (a sacred text for Muslims) version of Eden with extraordinary plants sporting strange shapes and unusual textures from all around the world. “We want to make gardens that calm the spirit and heighten the senses,” Stuart-Smith explains.

While this fits with the Islamic concept of gardens as sanctuary spaces, given the symbolic nature of riad gardens, one wonders what it means to introduce non-native species from South America or Australia in such a context. The juxtaposition of the gardens highlights a growing debate in Marrakech over the need to preserve local traditions versus adopting global trends. How can the city balance tradition and modernity, the secular and spiritual, the local and the international?

It’s a debate made more urgent by the current renaissance of garden creation. How appropriate are the water-hungry lawns of large hotels? How does artist André Heller’s flower-filled sculpture park, ANIMA, sit within the city’s garden tradition? Is the trend for drought-resistant cactus gardens, started by Jardin Majorelle, a good one given that cacti are native to the Americas and are never found in riads? Should more be done to elevate Islamic garden design, as the Moroccan king hopes to by offering up his 800-year-old, UNESCO-heritage Agdal Gardens for international study?

This lively conversation is good news for ethnobotanist Gary Martin, who has been working on his nine-hectare (22-acre) edible garden at Jnane Tamsna for more than 30 years. “I can tell a story about every plant here,” he says, walking past a huge mound of freshly picked olives. He sells some of his produce at an organic market and has recently opened a shop showcasing heritage products such as cold-pressed argan oil and euphorbia honey. “It’s taken years, but organic, authentic, fair trade – that signifies modernity now,” Martin says.