Explore the Luminous Birthplace of Morocco's Many Arts and Crafts Traditions 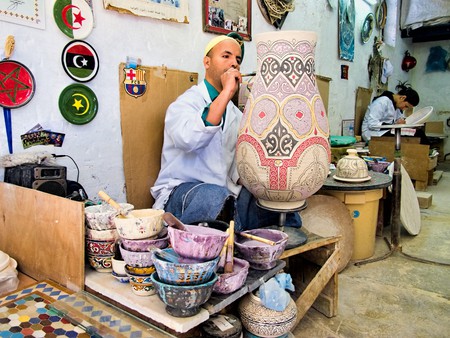 Morocco is a land that is resplendent with age-old traditions, artisans that follow skills handed down through many generations, and a wide range of stunning crafts and arts. Many techniques, including some of those discussed below, were born in the former imperial city of Fez, a city that, despite being previously overshadowed by Marrakech, is now starting to blossom once again.

Fez was the Moroccan birthplace of the beautiful tile work known as zellige. Introduced to the area by Moors fleeing Andalusia, tiles were initially chiseled into small pieces to create mosaic-like geometric patterns. The decorative and highly skilled tile work had become especially popular by the 14th century. Rather than being satisfied with just pale grey pieces of tiles, Fez’s artisans began to introduce colours to the clay. The first colours to be used were yellow, blue, and green. Red was later added in the 17th century. Natural elements were used for many years to add pigment to the clay. Today, a wide range of colours are used. Tiles are delicately cut into various shapes that are then pieced together to form eye-catching patterns. There are several workshops in the bustling streets of Fez’s medina where visitors can appreciate the fine skill that goes into crafting each and every piece of tile. There are numerous examples of decorative zellige around Morocco, especially in religious sites and in the former homes of wealthy citizens. 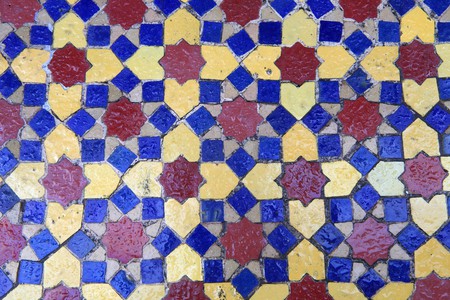 Pottery production has been a major industry in Fez for hundreds of years. The surrounding areas produce a rich clay, which is then handcrafted on a foot-operated potters’ wheel, set in the sun to dry, painted, and fired in a kiln. Along with the cities of Meknes and Safi, Fez remains responsible for around 80% of the country’s pottery production. Fez’s pottery is known for its blue and white colours. Take a stroll through Ain Nokbi, or the Pottery Village, and watch as craftspeople work the clay. There are also many items for sale, including tagine pots in all sizes, plates, bowls, vases, and mugs.

Fez is home some of the oldest and largest leather tanneries in the world. It is probably no surprise, therefore, to learn that the city is famous for its leather goods. Visitors can find items such as bags, belts, shoes, and wallets that have been locally made as well as footstools, cushions, and other leather furnishings.

The city is a centre for traditional footwear, known as babouche or balgha. Sometimes referred to as the Moroccan slipper, the flat and heelless leather shoes can actually be worn outdoors as well as inside the home. Although traditionally worn by men, nowadays both men and women don babouche on a regular basis. The shoes are available in a dazzling array of colours.

A trip around Fez’s souks reveals numerous leather workshops and stalls overflowing with leather goods. There are also several viewing terraces around the medina where visitors can watch men hard at work in the pungent tanneries. 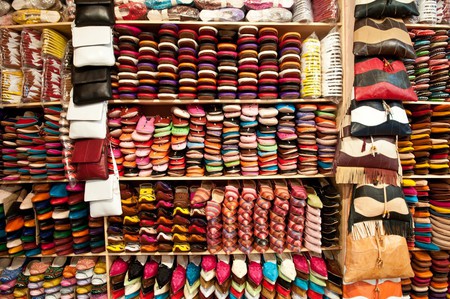 While many outsiders associate the kaftan and djellaba as Moroccan dress, there are several other items of clothing that can easily be spotted on the streets. While some items are mainly worn on special occasions, there are also those that are included in the day-to-day wardrobe of an average Moroccan.

Fez is known for its production of jabador, a set comprised of light-weight trousers and a tunic. Worn by men, the jabador is often made from linen or cotton, and it is available in a range of colours. Another locally produced garment for men is the selham. A long, sleeveless garment, it ties at the top and fastens rather like a cape. Skilled tailors and seamstresses in Fez also make a particular type of djellaba, known as a djellaba biziwiya. Breathable and airy, it is made from a much finer and more delicate fabric than the typical djellaba, making it more suitable for hot summer days.

Beautiful carpets and rugs, known locally as zerbiya, are produced all around Morocco and many regions, cities, and towns have their own distinctive designs. Fez is no exception. While the weaving methods are not unique to the city, Fez is one of the nation’s most significant carpet-producing cities. During Fez’s so-called golden age in the 13th century, the medina was awash with thousands of embroidery studios and many workers responsible for dying the wools. Carpet-making traditions have endured in the city, and visitors can see many striking rugs for sale throughout the souks. 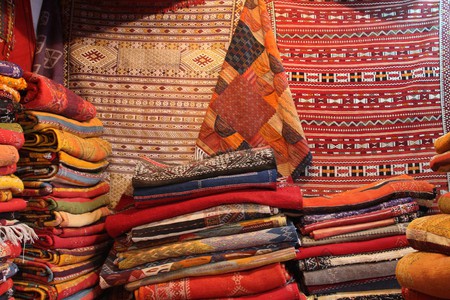 Fez is also a centre for metalwork, and handmade teapots, side tables, lamps, mirror frames, and trays are among the items visitors can see being made. The souks are ideal for peeking into workshops and browsing an assortment of completed wares. In addition to copper, the city is well known for bronze items. Watch as artisans hammer the robust yellow-tinged metal to create sturdy plates and trays, and admire lavish chandeliers created to lavishly embellish any ceiling. The main metal working areas are close to Attarine Square and at Place Seffarine. 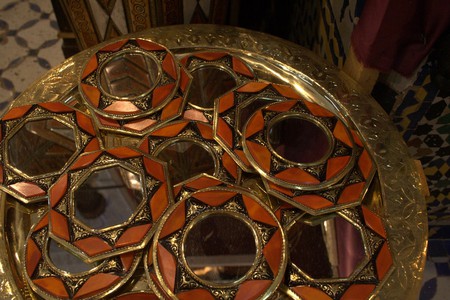 Glass work, musical instruments, bone carving, wood carving, and stone work are just a few other traditional crafts that can be spotted on a trip to Morocco’s fascinating city of Fez.