The Top Historical Gardens In Marrakech 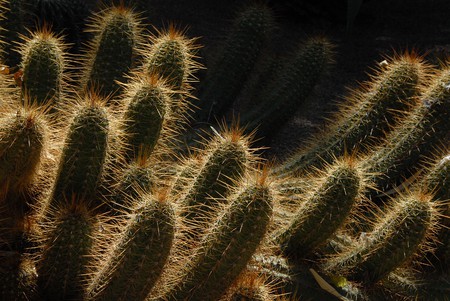 Marrakech, perhaps known best for its souks, squares and spices, is also a place of botanicals, lush gardens and hanging fruit. Green spaces have always been an integral part of life in Marrakech, and Marrakchis like nothing more than to cool off in the city’s gardens during the hot summer months. 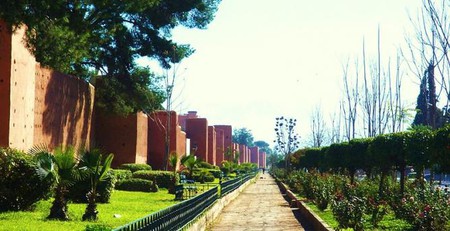 The gardens of Marrakech have inspired many artists, fashion designers and writers over the years. The British writer Osbert Sitwell, who devoted his life to the arts and literature, said Marrakech is ‘the ideal African city of water-lawns, cool, pillared palaces and orange groves.’ Matisse, Delacroix, Yves Saint Laurent, The Beatles, The Stones and Jean-Paul Getty visited too, finding inspiration and spending long periods in the city.

There are the gardens that many tourists visit, like the elegant Majorelle Gardens, which, named after the French painter Jacques Majorelle, was famously restored by Yves Saint Laurent. Or the Bahia Palace garden which is rich with intoxicating roses, jacaranda, jasmine, orange blossom and pomegranates. Then, there are the lesser known ones, often hidden behind plain facades. Here, inspired by The Gardens of Marrakech, we pick five of our favorites. 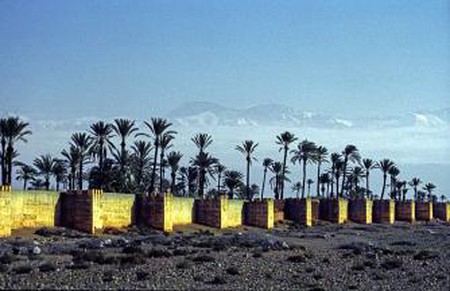 The 12th century Agdal Gardens (‘agdal’ literally means ‘walled meadow’ in Berber) are deservedly well known. Covering 400 hectares, these gardens are only open on Fridays and Sundays when the king isn’t home. With orchards fit for a sultan, there are splendid displays of apricots, citrus fruit and cypress trees. With such lush planting and bountiful greenery, it is easy to see why Moroccan craftsmen have employed a motif of foliage throughout Islamic art, carvings, and décor. Monty Don once described these gardens as ‘of international cultural importance on a par with Versailles or Villa d’Este’, and we quite agree.

Owned by ethnobotanist Gary Martin and his wife Meryanne Loum-Martin, this boutique-style guesthouse showcases design and botany. Set in the Palmeraie area of Marrakech where tens of thousands of palm trees create shade for other plants to prosper, the entire area has a desert oasis feel. The free-flow approach (there are no formal lawns), adds to the ambiance with grounds that encourage aromatic herb gardens, olive groves, lemon trees, vegetable plots and flower beds. All of this creates a farmland impression and makes it much, much more than merely a hotel garden. The organic gardens are spread over nearly nine hectares and are kept watered by traditional groundwater flow and drip irrigation, while the air is naturally scented by gardenia, jasmine, and white bougainvillea. 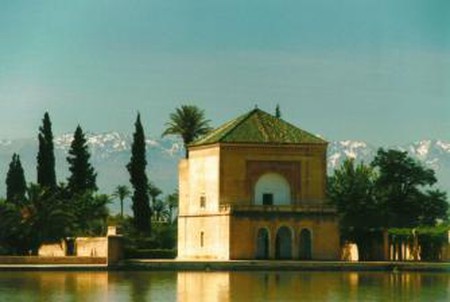 Several legends surround this garden. Some say that in the 12th century Almohad soldiers learned to swim in a large basin in the garden, others say that the Menara was the site where the sultan Abu Bakr Ibn Omar hid his wealth, while others say that one sultan charmed his guests over dinner, then threw them in the Menara Gardens‘ pools to drown. Nowadays, it is a calm garden scene which was developed further in the 19th century to include an olive grove. Clear days provide Atlas mountain backdrops and the garden is popular with families who show up for picnics and sunsets.

While the museum, which opened in 2011 after a long development period of ten years, is very much worth a visit, it is the gardens here that really remain in the memory. There are three very different ones to uncover, the most eccentric of which is the fabulous cactus garden. Looking like something from the wild-west, its pebble strewn lawns, surrounded by ochre walls, are filled with spiky cacti of all shapes and sizes. Apparently the curator, Abderrazzak Benchaabane, is a big fan of American western movies, which somewhat explains it. The Andalusian Garden, created with the Moorish gardens of southern Spain in mind, is more traditional, with its orange trees and canal, while the Water Garden is predictably notable for its serene pool.

The gardens at the famous hotel La Mammounia, are also worth a mention. You have to eat lunch or a drink in the hotel bar to be able to wander around these royal gardens, but it is worth it to spend a lovely afternoon there. A good choice for when you’re tired of the heat and the souk. Winston Churchill was a fan and so are we.