An Insider's Guide to Art in Marrakech 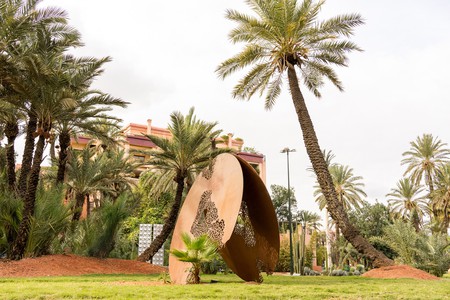 Marrakech is one of the major players in Africa’s burgeoning arts scene, as evidenced by Le Jardin des Arts in Gueliz | © Btihal Remli / Culture Trip

“This city taught me colour. Before that everything was black.” So said legendary French designer Yves Saint Laurent of Marrakech, and his words still resonate with all who visit one of Africa’s most visually arresting cities. Walking the narrow streets and alleyways of the Medina, it’s impossible not to be dazzled by city’s kaleidoscopic array of crafts and colours: blood-red rugs and kilims, many-hued lanterns, and a polychromatic array of fabrics and leatherwork dyed in rich canary yellows, emerald greens and azure blues. 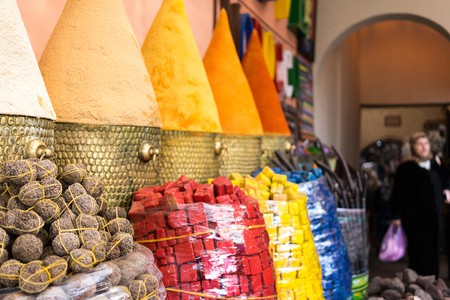 Not surprisingly, the city has long attracted foreign artists, some of whose work is showcased at two recently opened museums: the Orientalist Museum and the Museum of Art and Culture Marrakech (MACMA). Images of Marrakech’s past take pride of place here, featuring dreamily romanticised visions of the city itself and the wider Maghreb region by artists ranging from Delacroix to long-term local resident Jacques Majorelle.

For many visitors, it’s precisely this time-warped, Arabian Nights exoticism which is the source of the city’s enduring fascination. The Marrakech of the present, however, is a very different place. Look beyond the received Orientalist stereotypes and you’ll find a talented new generation of contemporary Moroccan and African artists, working in a city which has now established itself as one of the continent’s leading art destinations. 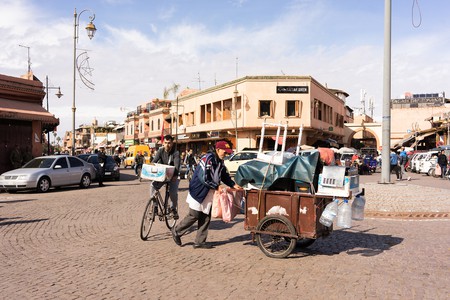 An eclectic array of galleries dot the city, from the boutique showrooms of the chic Guéliz district through to the alleyways of the Medina itself. In Sidi Ghanem, the city’s industrial area, a swathe of local and immigrant gallerists and designers have opened studios and ateliers, transforming the old factories and warehouses into Marrakech’s unofficial design district.

Leading arts events are also a growing feature of the city’s calendar, including the Marrakech Biennale, founded in 2004, and the ground-breaking 1-54 contemporary African art fair, already established in London and New York, which held its first-ever African edition in Marrakech in 2018. 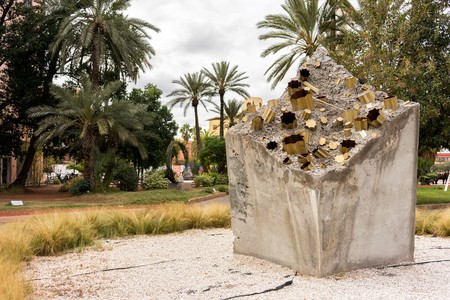 Gueliz is an up and coming artist neighbourhood, thanks to artworks such as Yasmina Alaoui’s concrete and metal sculpture | © Btihal Remli / Culture Trip

Another major landmark came with the 2016 opening of MACAAL (Museum of African Contemporary Art Al Maaden), providing the city with a museum devoted exclusively to contemporary works by the continent’s finest visual artists. MACAAL’s director of exhibitions, Janine Gaëlle Dieudji, is herself a living embodiment of the cross-cultural influences which permeate the city. Born in Cameroon, Janine studied in France before spending six years in Florence working with celebrated street artist Clet Abraham, eventually returning to Africa to work at the newly established MACAAL. Here is her selection of some of the best spots for art lovers to visit in Marrakech.

MACAAL for over 2,000 pieces of African artwork

Established by multi-millionaire Moroccan businessman and art lover Alami Lazrak, MACAAL showcases his huge collection of African artworks. Amassed over a forty-year period, the museum is a mix of visiting exhibitions alongside shows featuring works from the museum’s permanent collection of over 2,000 pieces. MACAAL provides a platform for local artists to reach wider audiences, not only through the museum itself but also by collaborating with organisations such as Oasis Music Festival. Janine’s personal highlights include the dream-like embroidered photographs of Ivorian Joana Choumali, the first African winner of the prestigious Prix Pictet, and the haunting documentary photography of Moroccan Leila Alaoui, tragically killed during an al Qaeda attack in Burkina Faso in 2016. Leading multimedia artists – including Morccan M’Barek Bouchichi and Gabonese artist Owanto – are also represented, as are the unique creations of Soukaina Aziz El Idrissi, featuring diaphanous woven fabrics made from recycled plastic.

Buried deep in the heart of the Medina (getting there is half the fun), the Riad Yima is the brainchild of internationally acclaimed Moroccan photographer Hasan Hajjaj. As the oft-described ‘Andy Warhol of Morocco’, Hajjaj transformed this old building into one of the Medina’s most memorable boltholes, offering a glimpse into his colourful universe and featuring quirky photographs of Arabian life alongside bric-a-brac made from recycled advertising signs and other found objects. “You see fake designer stuff all around the Medina,” says Janine, “so I love the way Hajjaj twists this, creating a kind of upcycled pop culture using global logos and recontexualised objects – a traditional Moroccan salon, for example, made entirely out of Coca-Cola crates.”

Dar El Bacha a peaceful retreat from the Medina

On the northwestern side of the Medina, the Dar el Bacha quarter offers a peaceful retreat from the non-stop hustle and bustle of the central souks. Centred around Rue Dar el Bacha and the monumental Dar el Glaoui palace (now home to the beautiful Musée des Confluences), the district is perhaps the Medina’s most cosmopolitan, with chic concept boutiques and arty riads run by a diverse cast of expats rubbing shoulders with traditional tailors, craftsmen and food vendors. “It’s my favourite part of the Medina,” says Janine, “and always full of surprises. Every time I go there I discover something new. Visit Le 18, a riad-café-gallery which attracts an eclectic young crowd of artist types and hosts lots of great exhibitions and events.” 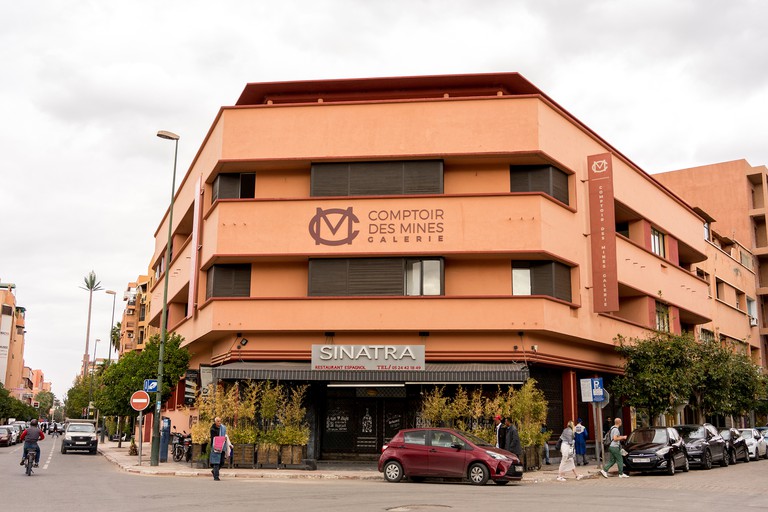 In the chic Guéliz district, the Comptoir des Mines is one of the city’s most visible galleries. It’s housed in a striking salmon-pink Art Deco building, complete with Hollywood staircases, mosaic flooring and period furniture. “I love this place for the central location and beautiful building,” says Janine. “It’s a really top-quality, professional venue showcasing some of the country’s leading artists. But it’s also enjoyably intimate. A commercial gallery which doesn’t feel like a commercial gallery – more like visiting someone’s house, with different rooms showcasing different artists, so you never quite know what you’ll find next.”

Out in the sylvan surrounds of Marrakech’s verdant Palmery, the Fondation Farid Belkahia is a shrine to one of the founding fathers of modern Moroccan art. Born in Marrakech in 1934, Belkahia was a leading member of the seminal Casablanca Art School which encouraged a generation of young Moroccan artists to move beyond the Orientalist styles fashionable during Morocco’s French Protectorate. Belhakia’s own work is emphatically Moroccan, featuring Amazigh (Berber) motifs and including unusual creations painted on animal skins using traditional henna dyes. “The foundation occupies Belkahia’s own house,” says Janine. “What I particularly love is his old studio, which has been preserved exactly the way he left it. You can imagine Belkahia still working there, almost as if he had just popped out and will be back in a moment. A wonderful place to feel the presence of the artist himself.”

Art Gallery
Facebook
Email
Twitter
Pinterest
Copy link
Share
Map View
A pillar of the city’s contemporary arts scene, the Voice Gallery was founded in 2011 by Italian expat and long-term Marrakech resident Rocco Orlacchio. Formerly located in the zone industrielle of Sidi Ghanem, the gallery recently relocated following the collapse of the building in which it was situated – fortunately without any casualties. “This is another great place to discover new artists, both local and international,” says Janine. “Orlacchio likes taking risks and showcasing emerging talents who perhaps have never been given gallery space before.”
Open In Google Maps
Rue Salah Dine el Ayoubi, Menara Marrakesh, Marrakesh-Safi, 40000, Morocco
+212524336770
Visit Website
Give us feedback
Give us feedback