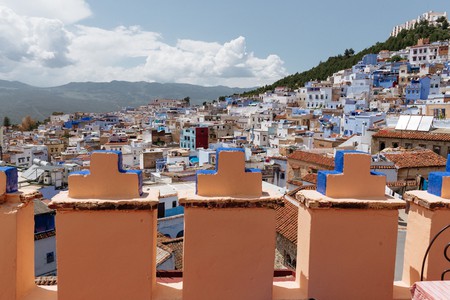 Famous for its soothing shades of blue set against crisp white and muted creams, Morocco‘s Chefchaouen is a picture-perfect destination with a laid-back vibe.

Often referred to as Chaouen by locals, much of the city’s charm comes from its distinctive hues. The diverse doors and gates tucked into the walls add to the visual appeal. There’s a reason why Chefchaouen is often said to have some of the prettiest streets in the world. Stroll through the city’s old medina and venture beyond the old defensive walls, however, and you’ll also discover a number of Moroccan architectural jewels too.

Want to explore Chefchaouen with a local guide? Book Culture Trip’s 13-day Moroccan adventure where you’ll be able to snap the brilliantly blue houses while learning about its architecture from our Local Insider – and discover so much more of this enchanting country.

Constructed in the 15th century, Chefchaouen’s Grande Mosque was built on the orders of Moulay Mohamed Ben Ali Ben Rachid, the son of the city’s founder. It features an octagonal minaret, which is somewhat unusual when compared to the many square minarets that generally tower over the nation’s myriad mosques. The shape was influenced by Andalusian styles, brought to the country by Muslims from Spain. Built from stone, the shades of brown and beige are juxtaposed against the nearby blue and white buildings. Admiring the mosque is among the top things to do in the city. Do note that non-Muslim visitors are not permitted to enter the mosque.

Nearby Food/Drinks: Restaurant Paloma (a Moroccan restaurant with Berber, Mediterranean, African, and Middle Eastern dishes on the menu). 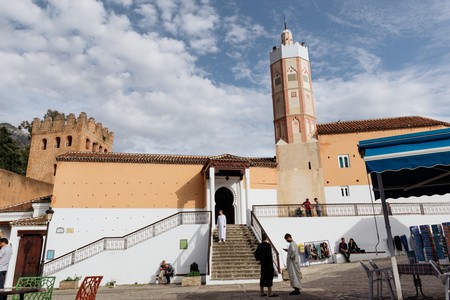 Bab el Ain is one of the main gateways into the historic 15th-century medina of Chefchaouen. It is located at the southern side of the medina, close to a large cemetery. The imposing terracotta-coloured stone façade has a relatively small archway through which people can pass and small windows in the upper section.

Nearby Food/Drinks: Restaurant Populaire Bab Ssour (a welcoming restaurant with a local flavour and Moroccan staples, including veggie-friendly dishes).

Chefchaouen’s small but charming kasbah dates back to between the 15th and 16th centuries AD. It was built under the command of the city’s founder, Moulay Ali Ben Moussa Ben Rached El Alami. The purpose was to defend the new settlement from attacks by the Portuguese and Spanish. The city of Chefchaouen subsequently grew around the kasbah’s walls. Also known as the Ethnographic Museum, the Kasbah Museum is found within the walls. The fortress has 11 towers, some of which can be climbed for great views over the area. The style is Andalusian-Maghrebian, and architectural elements include arches, domes, pillars, passageways, and parapets. Peek inside the old prison, complete with wall-mounted shackles. The kasbah is located next to the Grand Mosque, just a few steps away.

Nearby Food/Drinks: Restaurant Morisco (a relaxed restaurant with a good reputation that serves local specialities). 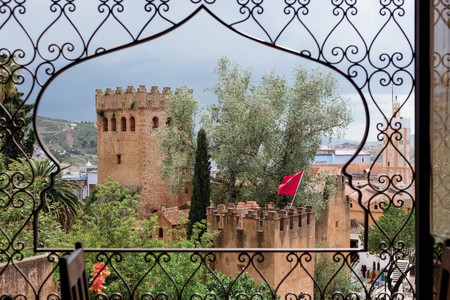 Chefchaouen has plenty of riads and dars (traditional Moroccan homes) that have been converted into charming guesthouses. Dar Baibou is one such establishment. Created from three adjoining homes, the buildings date back 350 years. Local crafts adorn the interiors, and guests cannot help but marvel at the ornate interiors and fine architectural designs. 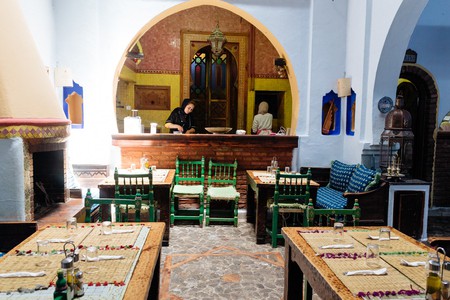 Located two kilometres from Chefchoauen’s medina, the Spanish Mosque is perched on a hilltop. The evocative ruins overlook the city, and it’s a terrific vantage point from which to admire the surroundings. The white-washed mosque was built in the 1920s by the Spanish. It failed to attract local worshippers, however, and eventually fell into disrepair. Restoration works were later carried out. As a non-working mosque, all visitors can take a peek inside.

Nearby Food/Drinks: Due to the hilltop location and remote nature of the ruined mosque, it is recommended that you eat in the city before making the 45-minute walk to the mosque. Take a bottle of water to keep thirst at bay. Alternatively, do as the locals do, and pack a picnic. 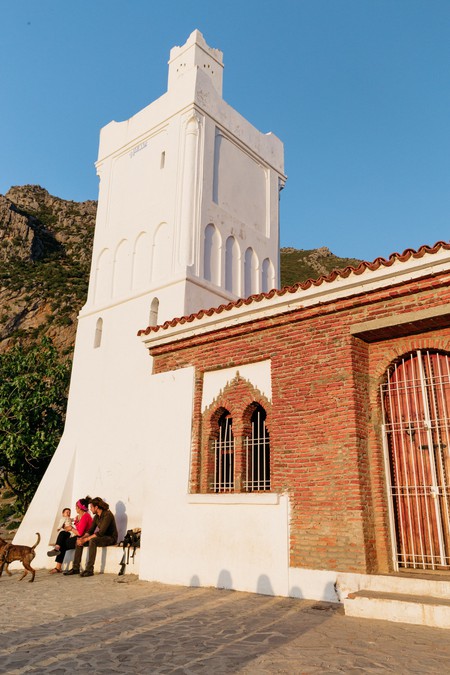 The Zaouia of Moulay Abdeslam Ben Mchich Alami is a shrine located in the Rif Mountains, about an hour’s drive from the city of Chefchaouen. The white-washed stone shrine was built in the 13th century to house the remains of its namesake, a prominent Sufi saint. A green door is set into the white walls, and like many religious sites in Morocco, non-Muslim visitors are not allowed to visit the shrine.

Nearby Food/Drinks: There are several small eateries in the village, serving traditional Moroccan food.