A Tour of Morocco's Lighthouses 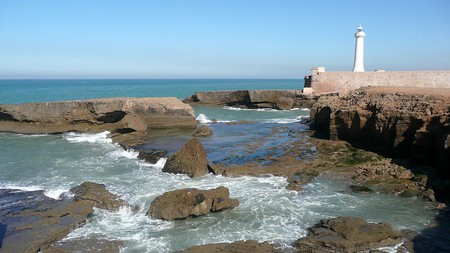 Rabat lighthouse next to the rocks | © Pline/WikiCommons

With long coastlines along both the Atlantic Ocean and the Mediterranean Sea, maritime enthusiasts can spot a number of interesting and historic lighthouses around Morocco. Many of the country’s lighthouses combine North African and European styles. Eye-catching features along rugged coastal areas and close to Morocco’s splendid beaches, here are some of the nation’s finest lighthouses.

The tall, white lighthouse known as Phare de Rabat was built in the 1920s to warn ships and boats that they were approaching the shore. The round lighthouse is still active today. 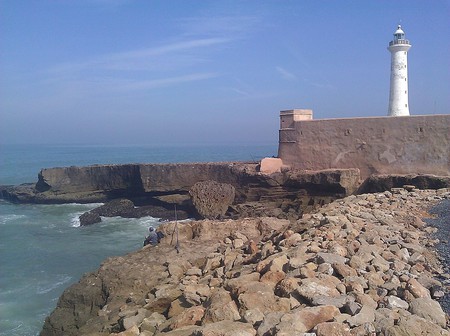 Sunset is a particularly nice time to visit the tall lighthouse in Morocco’s capital of Rabat. The white structure sitting atop sand-coloured walls stands out against the changing colours of the sky. 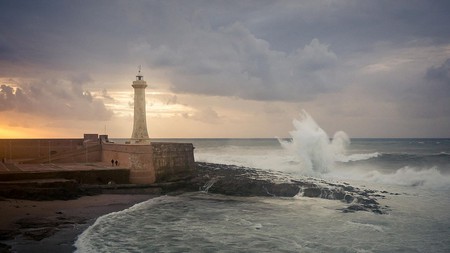 Located close to Agadir, Cap Rhir lighthouse dates back to the 1930s. The round tower is painted white and has a metal lantern roof. The small surrounding walled compound has a number of small buildings, including the lighthouse keeper’s home. 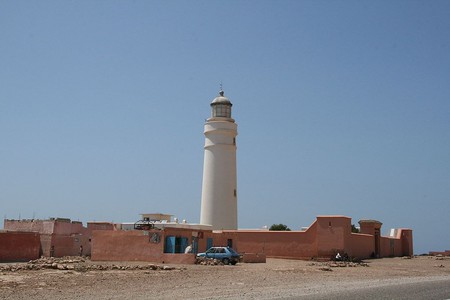 Sidi Bou Afi lighthouse is one of El Jadida’s major attractions. Opened in 1916, the round is painted mainly white, with grey details at the top and bottom. 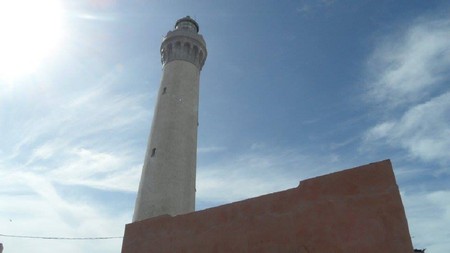 The soaring minaret of the Portuguese City Mosque in El Jadida was originally a lighthouse. It was built during the times of Portuguese colonial rule in the area. Today it is a working mosque, with the muezzin issuing the call to prayer from where the lantern once cast its light over the waves. 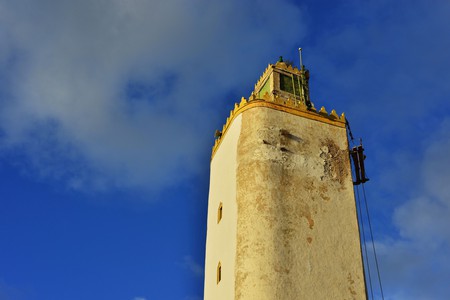 The former lighthouse is fairly interesting in its design as it has five sides, as opposed to the typically round or square structures along the country’s coasts. The lower walls are orange-brown in colour, and the main part of the tower is painted white. 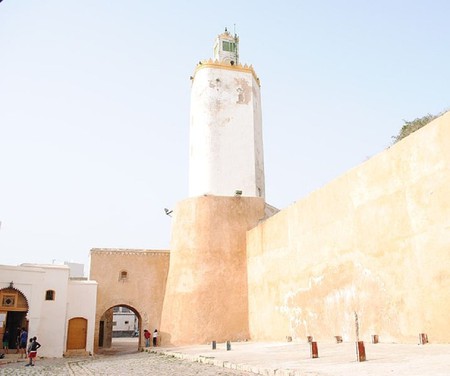 The Portuguese City Mosque, which was previously a lighthouse | © M.Rais / Wikimedia Commons

Cap Spartel lighthouse is situated on a pine-covered headland, close to the popular Hercules Caves in Tangier. It is an attractive lighthouse with a pale square tower and brown carvings at the top, typical of Islamic designs. Located at the point where the Mediterranean meets the Atlantic, the lighthouse was built in 1864 on the orders of Sultan Muhammad IV. 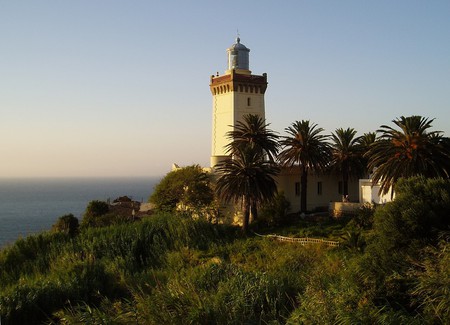 Sidi El Abed lighthouse is along the Atlantic coast on the outskirts of Rabat, within an area called Harhoura. The lighthouse is fairly plain and modern in its designs, built from metal that has been painted white. Numerous tetrapods sit in the waters below. 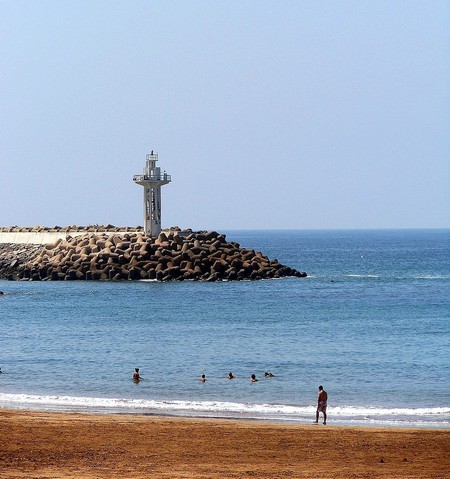 The deep-red lighthouse of Imsouane sits close to the port in a small traditional fishing village. The lighthouse has a green top and the green star of Morocco’s flag is proudly displayed on the round tower. Imsouane can be found close to Agadir, and is a great spot for surfing. 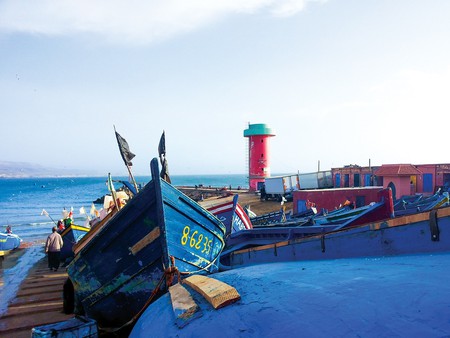 Cape of the Three Forks lighthouse

Turtles, whales, seals, and dolphins swim in the waters around Cape of the Three Forks. A headland on Morocco’s Mediterranean coast, the area is known as Ras Tleta Madari in Arabic, Cabo de Tres Forcas in Spanish, and Cap des Trois Fourches in French. Close to the Moroccan city of Nador and the Spanish enclave Melilla, the area has an attractive lighthouse. A brick-built tower sits on top of a two-level building, making the whole structure appear less tower-like and more squat. The lantern casts light across the choppy and treacherous waters. 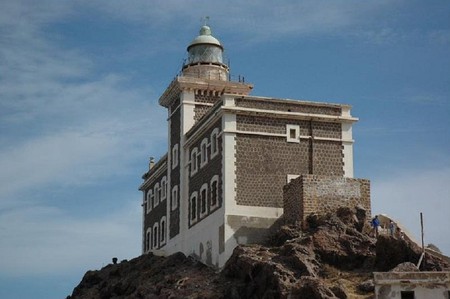 El Cabino lighthouse is situated in the disputed area of Western Sahara. Close to the town of Boujdour, part of the surrounding wall has already been ravaged by the ocean. The modern, white tower has narrow dark rings painted around it, creating a striking effect. 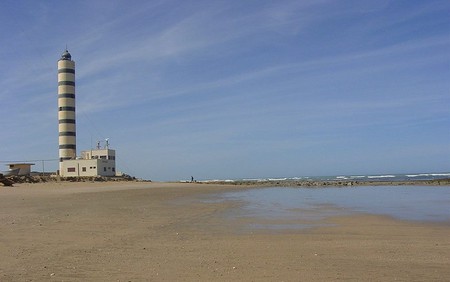 A tall lighthouse rises up from Boujdour Military Base to dominate the skyline. The lighthouse station was established in the early 1900s and is also known as Ras Boujdour. The octagonal tower features white plaster with darker-coloured stones down the edges. 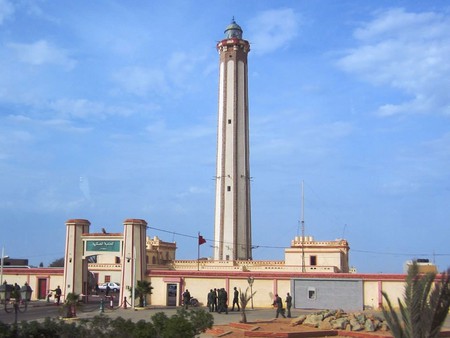 The lighthouse at Boujdour Military Base | © David Stanley / Flickr

Sidi Mogdoul lighthouse is located in Essaouira. Standing 17 metres (55 feet) tall, the square lighthouse has contrasting white masonry with darker brickwork. It is named after an 11th-century Moroccan Berber saint. 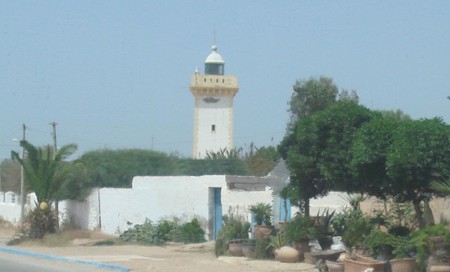 Phare d’el Hank is a lighthouse in Casablanca, the largest city. It sits towards one side of the curved beach, with the stunning Hassan II Mosque on the other end of the beach. The round, white tower has traditional Islamic designs at the top. 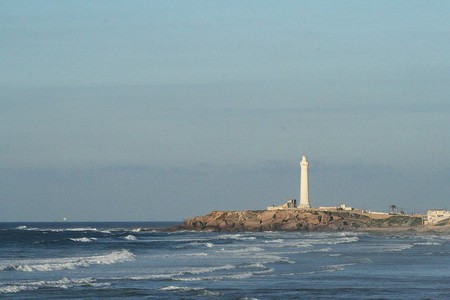 Unlike many of Morocco’s lighthouses, Phare d’el Hank is open to visitors. You can climb the inner spiral staircase to the top for panoramic views of the city and sea – though there are more than 250 steps to tackle.

Cape Malabata, near Tangier, has a lighthouse and a fairy tale-like castle. The weathered lighthouse building has a fairly small square tower on top of a rectangular two-storey building. Painted a pale creamy colour, but now showing signs of age, the outer walls display the Moroccan star. The five-pointed green star of the nation’s flag is surrounded by a now-faded red circle. 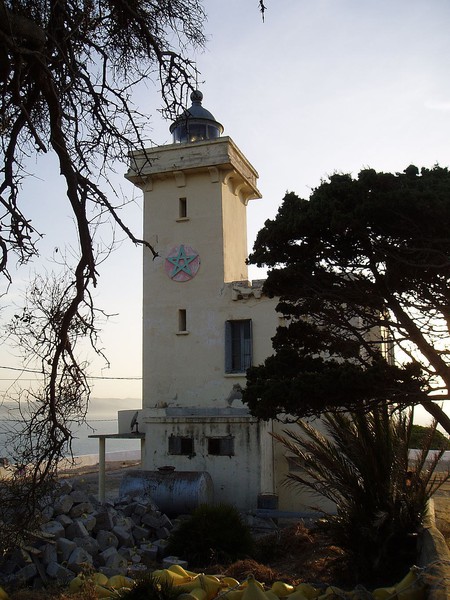