A Street Art Tour of Morocco 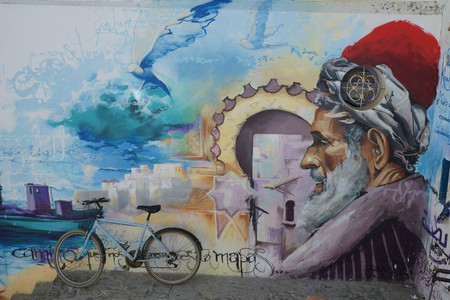 North Africa’s captivating country of Morocco is filled with art. Architectural gems abound, including stunning mosques and other religious buildings, ornate fountains, exquisite palaces, old fortresses, interesting lighthouses, and other buildings with striking designs. There are plentiful art galleries and museums. Street art can also be found in abundance, adding contemporary and free-to-admire scenes in places that you may not expect. Here’s the lowdown on Morocco’s relatively new street art scene. 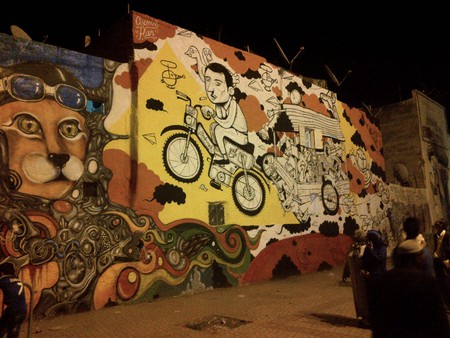 While street art through Morocco is diverse, with many different themes displayed, there are some subjects that are more prevalent than others. Scenes of local life and local people, both Arabs and Berbers, help to showcase local culture and traditions. Typical Islamic designs, including calligraphy, are common as well, and you can also see surrealist and abstract designs.

Although street art wasn’t so prominent in Morocco until fairly recent times, official endorsements and commissions have breathed life into numerous buildings and walls around the nation. From 2015, the Moroccan capital of Rabat has hosted an annual street art festival, Jidar, where local and international artists make their mark on a number of buildings around the city. The festival has sparked an interest in contemporary street art, with more and more people appreciating the beauty that can be created in public spaces. The goal is to encourage more young people to take an interest in the street art scene in an open and sanctioned manner. Smaller street art festivals now also take place in various cities around the kingdom.

There are now numerous places around Morocco where people can admire an assortment of striking street art.

Naturally, Rabat has a lot painted walls, many of which remain from several years worth of street art festivals. There’s a faceless man in Berber attire sitting in the desert with a lamp and a rug, rather reminiscent of the tale of Aladdin, gigantic fruit and vegetables, an elderly Moroccan lady, a man battling with a tiger-human hybrid, and a rather ghoulish figure with a lamb. Other examples include a large reptile sitting on a rock, business people in suits wearing high-tech headpieces, representing how people today are becoming chained by technology, and an elderly man and young boy, back to back but joined together by their hair. 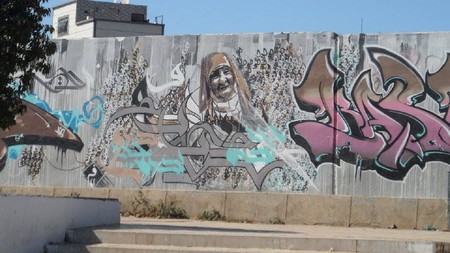 Marrakech has lots of street art, both in the old medina and in the colonial part of the city, Gueliz. Opposite the train station, a Berber man peers down onto the streets from the side of a building. Red roses, echoing the city’s nickname as the red city, figures, geometric designs, and abstract shapes were added during the 6th Marrakech Biennale. The French street artist known as C215 has left his mark in the city too, working with stencils and paint to show the close-up features of residents that most people ignore and fail to notice. 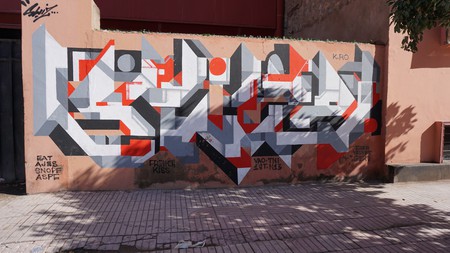 Essaouira has one of the largest murals in North Africa, stretching across almost 6,500 metres. Created by an Italian artist known as Run, the mural depicts two people trying to communicate over borders. Some people see the art as representative of the various refugee crises around the world. Other scenes can be found throughout the city. 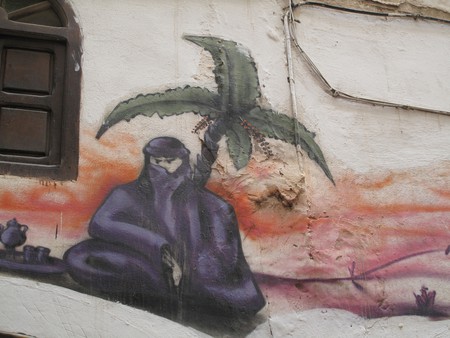 Plentiful colourful and eye-catching street art pieces can be spotted throughout Tangier’s old medina. Easy to admire, many images are concentrated in a relatively small area. Stretching along walls in tiny and dimly lit alleyways, the pictures include close-up portraits of Moroccan people, a lady pumping water from a well, and famous singers. There’s a wall painted to look like the wall of a traditional kasbah, coastal scenes, and a cartoon-like dragon, among others.

Although Chefchaouen is mainly known for its painted buildings, with blocks of blues, creams, and whites covering surfaces throughout the old medina, the city still has several interesting pieces of public art. Created in the city’s signature blue hues, scenes of local life and people stand proudly for all to admire. There are also colourful pieces scattered throughout the blue and white tones in the old medina. 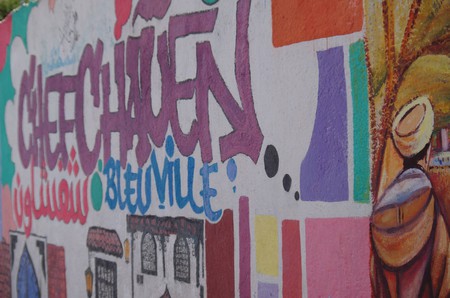 Something of a magnet for artists, cute Asilah is known for its abundance of paintings in the medina. Asilah Arts Festival takes place every year, with part of the festival including decoration of local walls. Long after the painters, poets, musicians, story-tellers, and dancers have disappeared, striking pictures remain on the walls for everyone to admire. Vibrant colours contrast with the bright white walls, with some images stretching up several stories and covering several buildings. Make sure to wander away from the main walkways and explore the smaller alleys to see some of the best pieces. There are some that encourage interactive and imaginative photo shoots too, such as a large chair that, if you position yourself just right, you can look as though you’re sitting on. 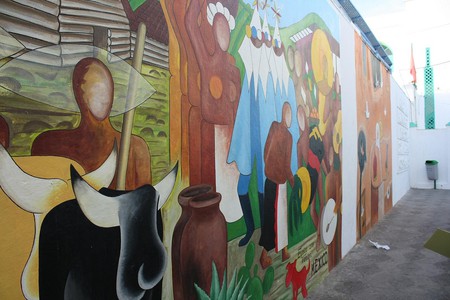 Close to the Jardin des Lions in the coastal city of Larache you’ll find a long road with painted walls on either side. Pictures seek to impart various social messages as well as images that are purely decorative in their nature. There are painted doorways that look almost real, verdant countryside scenes, people wearing traditional dress, and paintings that seek to encourage people not to drink alcohol, smoke, take drugs, drop litter, waste water, and other similar messages. 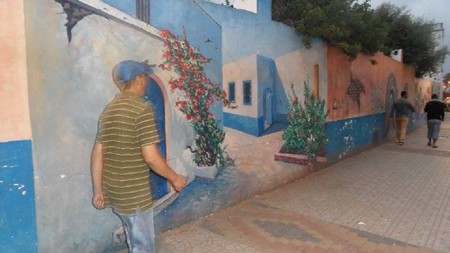 People walking past a painted wall in Larache, Morocco | © Author’s own image

Located in southern Morocco not too far from the popular seaside city of Agadir, Al-Dusheira was decorated for World Environment Day. Encouraging local youths to unleash their artistic and creative talents, the goal was to raise awareness about various environmental issues through the medium of paint. Other themes included civil responsibilities and rights and preservation of local culture. Graffiti artists sprayed slogans in both Arabic and the Berber language of Tamazight.

An off-the-beaten-track destination close to El Jadida, Azemmour previously hosted the Remp’Arts street festival. Many street artists from across the world came to the city to decorate the old medina and showcase their skills. While many of the walls are a little shabby today, with peeling and chipped paintwork and faded colours, it is easy to imagine how impressive the area must have once looked. Strolling through the maze-like streets and passing traditional homes you’ll come across diverse interesting pieces. A painted chicken hangs upside down on one building, while a rather scary demon-like figure glares from another. A wide set of steps looks colourful from a distance but, as you get nearer, standing right in front of the steps reveals an intricate image. 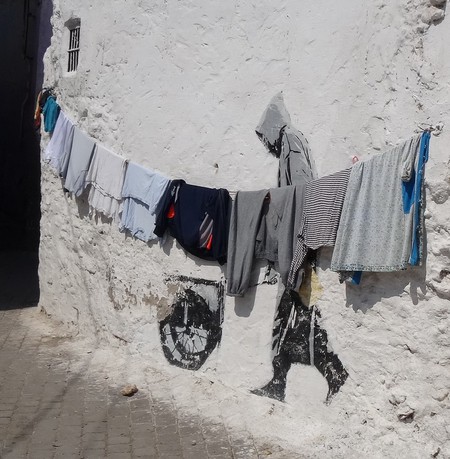 In 2012, young street artists and graffiti artists worked hard on transforming Les Abattoirs de Casablanca in Morocco’s financial heart. Some images have been touched up and some are now showing the ravages of time. A stroll through Casablanca’s medina also reveals several interesting painted scenes. 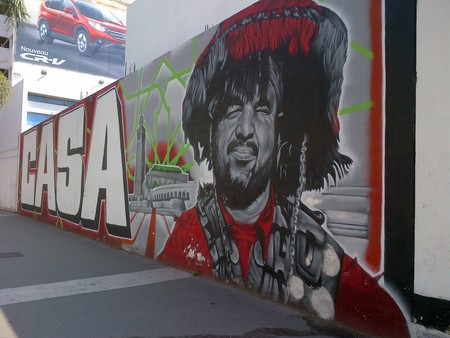