A Guide to Celebrating Eid al-Fitr in Morocco

Bright prayer mat on grass | © Wikimedia Commons
Eid al-Fitr is an important Muslim holiday celebrated for one day at the end of the Islamic holy month of Ramadan. As Ramadan is based on the lunar calendar the date of Eid al-Fitr changes each year. Often referred to as simply Eid, it is not to be confused with the other major Muslim holiday of Eid al-Adha. In Morocco, Eid al-Fitr may also be referred to as the small, or lesser, Eid, while Eid al-Adha is the big, or greater, Eid. Morocco’s predominantly Muslim population means that Eid al-Fitr is a major celebration all over the country. Here’s how Moroccans typically celebrate the breaking of their month’s fast with Eid al-Fitr.

Zakat al-Fitr is the name given to charitable donations that must be made before families can celebrate Eid al-Fitr. Although it is due on the day of Eid, most families fulfil their charitable obligations a few days before the holiday. Payments must be made before the first morning prayer, salat al-fajr, on the day of Eid. The responsibility for giving the donations falls on the head of a family. Donations should take the form of staple food supplies, like wheat or flour, although other essentials or money may also be donated. As a general rule, the equivalent of one bag of wheat should be given on behalf of each member of a family. The idea is that even the poorest of people have the means to be able to enjoy the religious celebrations. 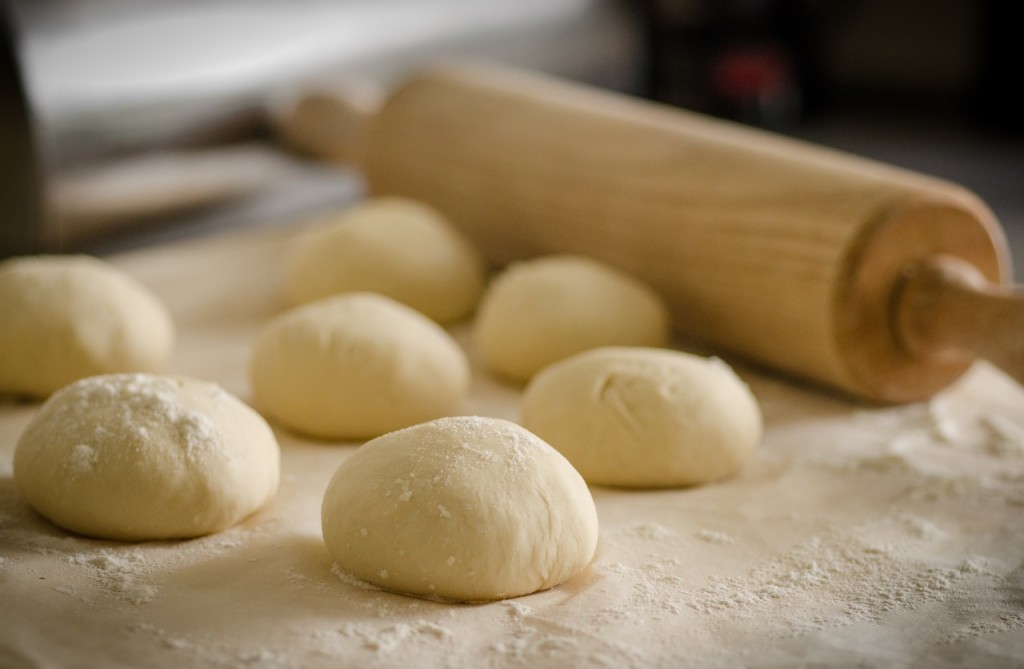 The first prayer of the day, salat al-fajr, is as any other day. The second prayer on the day of Eid is an extra prayer in addition to the five daily prayers offered by practising Muslims. This prayer is called salat al-Eid and it is normally held at sunrise, around an hour or two after salat al-fajr. Unlike other prayers, salat al-Eid must be performed in a group; it is not acceptable to pray alone. People generally gather to perform this special prayer in a field, a large mosque, or a large hall. 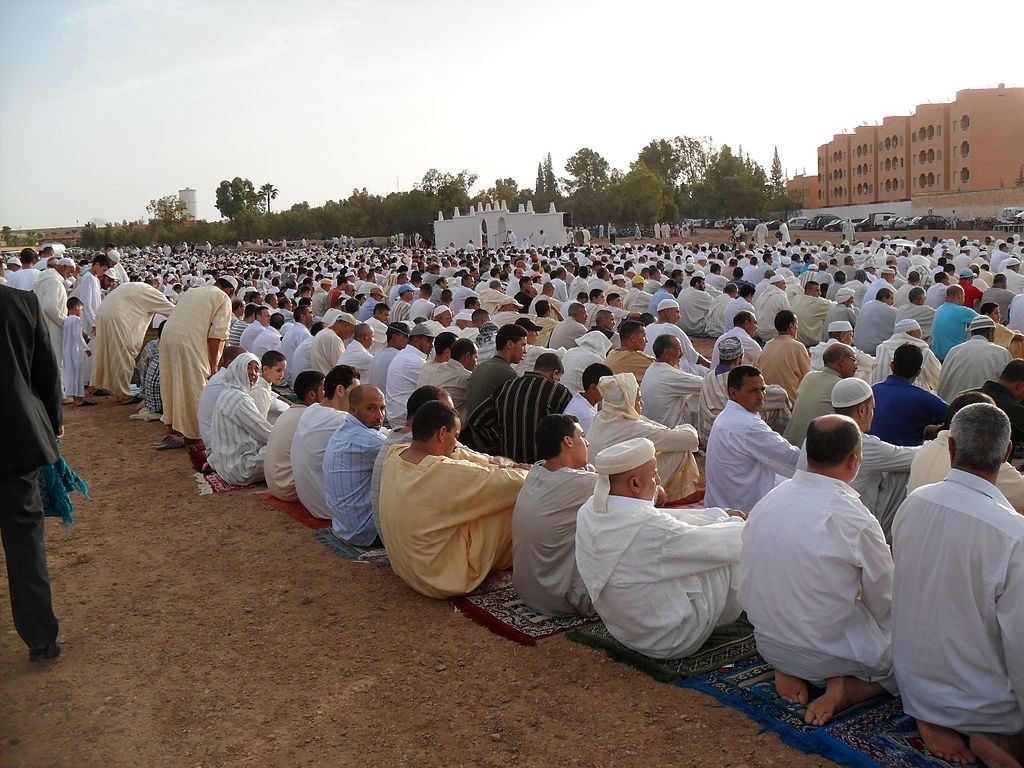 Symbolic Places of Worship for Eid

Each city has designated fields which are known locally as places where Muslims can join others in prayer for salat al-Eid. People take their own prayer mats. There is an imam who gives a speech and leads the prayers over a loudspeaker. The rituals normally last for around 45 minutes. Although it is traditional for people to go to such a field for congregational worship, those who live far from the fields may join others at large mosques.

The Hassan II Mosque in Casablanca, Koutoubia Mosque in Marrakesh, and Tangier’s Grande Mosque are a few examples of where Moroccans may go to pray on the day of Eid al-Fitr. Both men and women head to the fields or mosques to perform salat al-Eid, though they pray in separate areas. 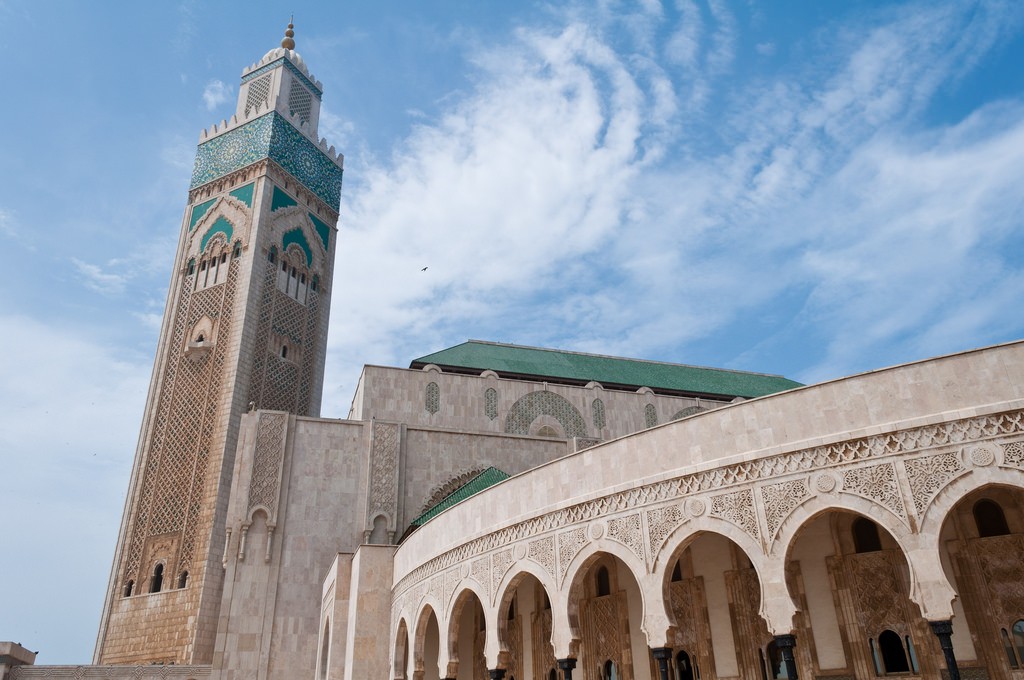 Women start the preparations for Eid a couple of days before the celebration itself. After a month of fasting during daylights hours, it is not permitted for anybody to continue to fast on the day of Eid al-Fitr. If people must make up missed days of fasting, they cannot do so at Eid.

There are two types of pancake-cum-crepe called msemen and baghrir, which are often accompanied by butter, honey, and mint tea as a common breakfast food. Moroccan pastries are available in abundance, with briouat bil luz, faqqas, kaab el ghzal, and ghoriba among the sweet treats for people to nibble on.

Because Eid al-Fitr is a time for families to celebrate together, with extended families and sometimes members of the community eating together, a huge tagine is often prepared, served with the crusty Moroccan bread called khobz, fresh fruit, and more mint tea. Another popular meal is chicken with lemon and olives. While different families have their own traditions for meals on Eid, the focus is always on families coming together to dine and celebrate. 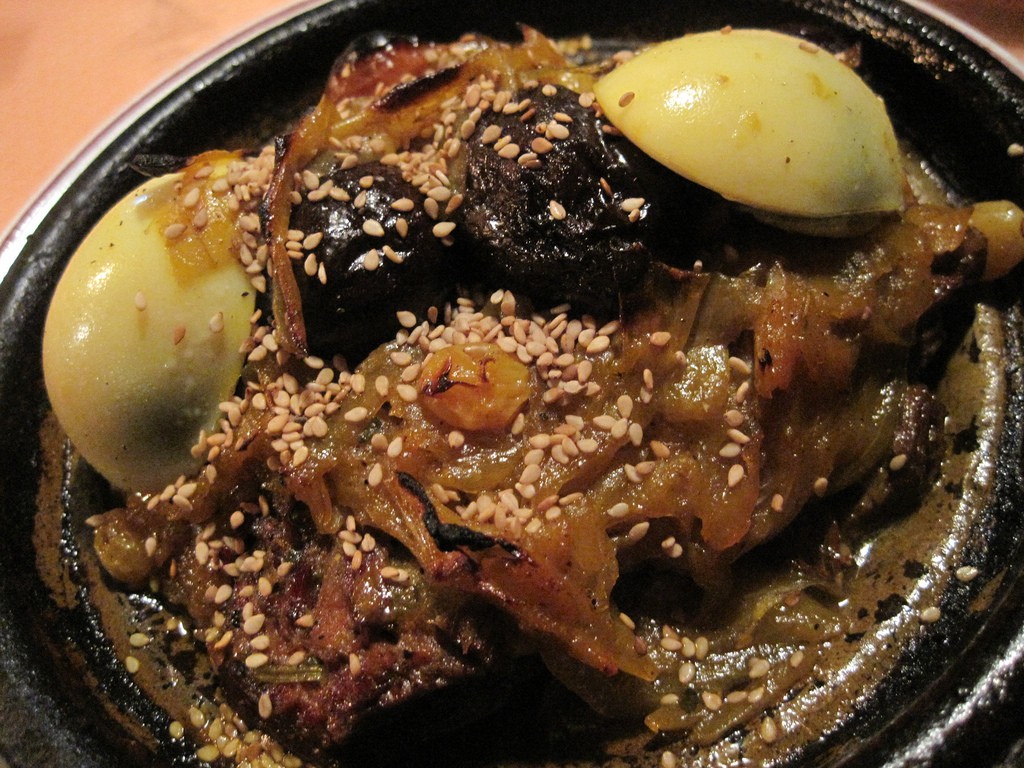 Male Moroccans typically wear a new djellaba or jabador with the traditional Moroccan shoes, balgha. Djellabas and jabadors are both long, loose items of clothing. Women wear traditional clothes too, such as kaftans, djellabas,, or tackchita. Although people prefer to buy new clothes to celebrate Eid, if this is not possible they will wear the finest items that they already own. 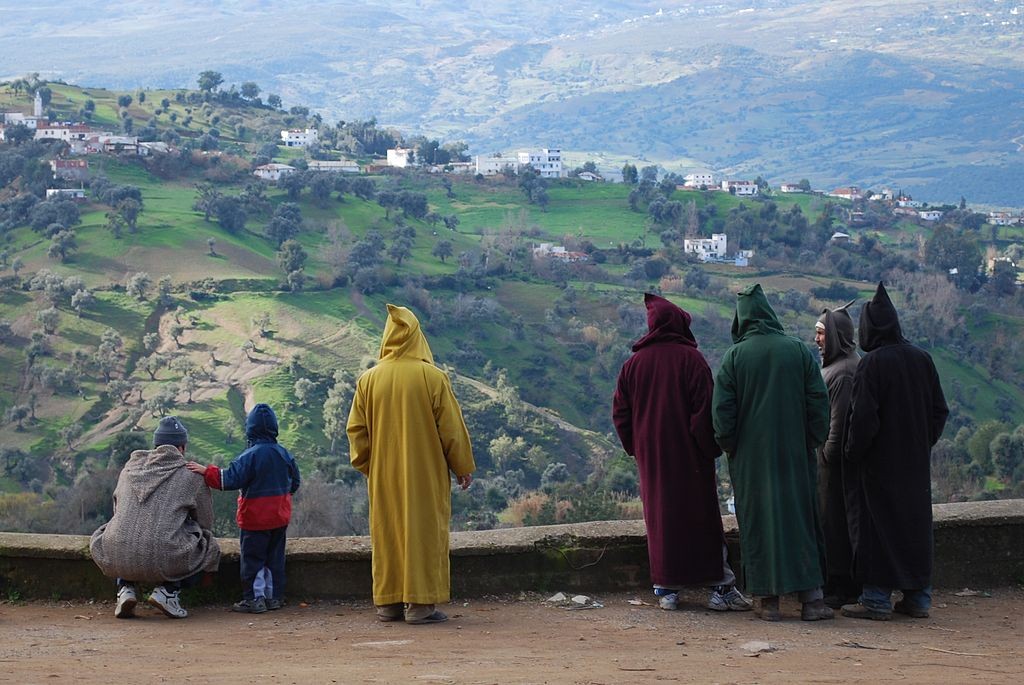 Gifts Given at Eid

It is common for people to buy small gifts for children. Usually, older members of the family give clothes, sweets, or small sums of money to the younger members. Immediate family members may exchange small gifts, though this varies from family to family. If gifts are exchanged, they are generally just token gestures. Eid al-Fitr has a strong focus on religion; it is not commercialised in Morocco. Celebrations are often fairly low-key, taking place in homes or other private spaces. It is quite unusual for visitors to witness Eid celebrations due to the fact that there aren’t really public events, decorations, or other outward clues of festive activity. 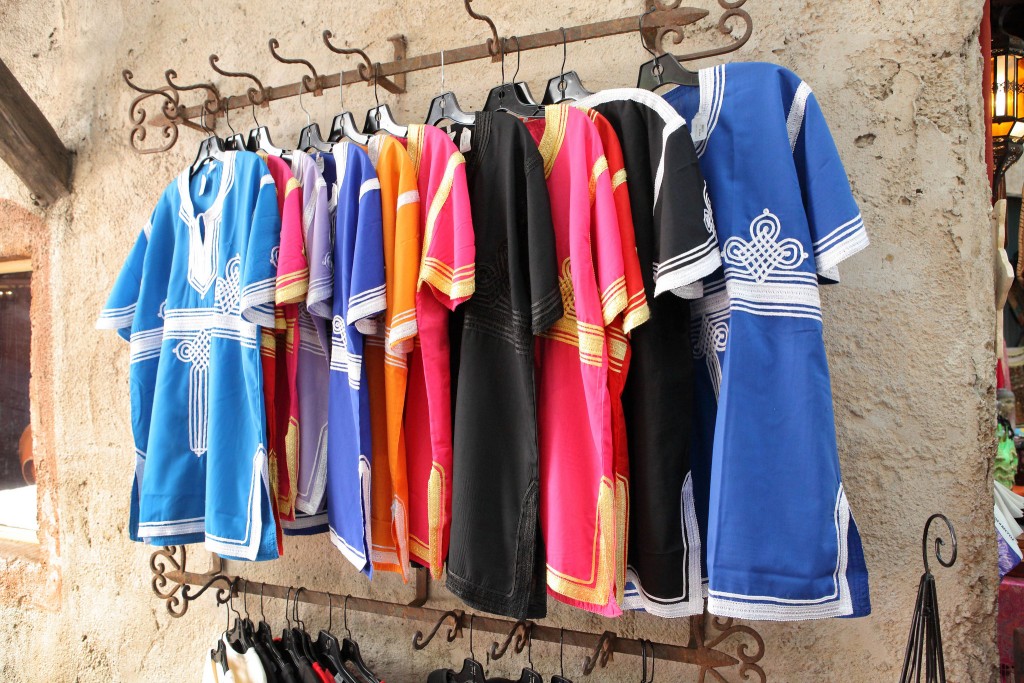 Typical Order of the Day for Eid Celebrations in Morocco

People wake up early to perform the dawn prayer of salat al-fajr. They then change into their best clothes and a light breakfast may be enjoyed before going to perform salat al-Eid, but it’s more common for people to enjoy breakfast after the communal prayer. People return to their homes to spend the day together. Afternoons are generally spent at home, though males might go to visit family and friends to wish them well. Lunch and dinner are eaten at home with family, and visitors are often invited to stay and eat. The remaining regular prayers (salat) of dhuhr, asr, maghrib, and isha’a are performed as they would be on any other day.

Eid al-Fitr is a public holiday in Morocco, and many restaurants and cafes are closed. Tourists might be best to plan to eat at their accommodation or ask in advance for establishments that will be open on Eid.