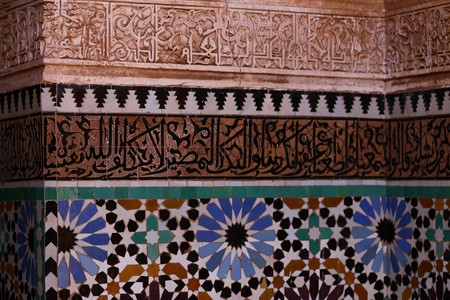 With a population that’s made up of Berbers and Arabs, each ethnic group has contributed to the country’s wealth of rituals, celebrations, and cultural traditions. Since most Moroccans are Muslim, there are influences from Islamic custom, but there are some things you’ll only find in the kingdom.

Djellabas are a type of loose long item of clothing that can be worn by people of both sexes. They have long sleeves and usually, a pointed hood as well. The item of traditional clothing most commonly associated with Morocco, it has Berber roots, and thus can be found in other North African lands where Berbers settled, for example Algeria and Tunisia. The djellaba bziwiya, however, originated in Morocco’s town of Bzou and is unique to the country. The fabric is much thinner than a regular djellaba and it can take up to a month to hand-make one.

Similar to a kaftan, a takchita is a long and loose item of clothing worn by women in Morocco and is commonly worn for celebrations and special events. It is made of two pieces: a fairly plain dress and a beautiful over-garment richly decorated with beads, sequins, buttons and embroidered details.

This music was born in the communities of Morocco’s artisans in the south of the country. With influences from Andalusian musical styles, malhun is a type of sung poem, with lyrics that often relate to social and cultural issues.

Tanjia is a traditional Moroccan dish from Marrakesh. The meal takes its name from the stone pot it is cooked in. A meaty dish – spices, oil, and salted lemon are added to cuts of meat (usually lamb) before being slow cooked in embers. It was traditionally eaten by men who worked in the souks; they would prepare a tanjia for their day off on Fridays and take it to the park for a picnic with their friends.

While couscous is widely eaten in many countries around the globe, this staple food of Morocco is traditionally enjoyed on Fridays. A particular type, seven-vegetable couscous, is the norm on the Islamic holy day. The word for Friday in Arabic means ‘ensemble’ and, as the holy day, it sees a lot of people grouped in mosques. Couscous is typically eaten in groups, such as a large family sitting down together to share a meal from one large dish. Historically, people would gather after the Friday prayers and look forward to a meal that was plentiful enough to make everyone feel full and satisfied.

Zellige is the name given to the ornate and colourful tilework that can be found in many elegant buildings around Morocco. The craft originated in Fez, and it still practised today by master artisans. Small pieces of colourful tile are shaped by hand, using a fine chisel, and then set into white plaster to create intricate designs. In keeping with Islamic principles, designs are generally of geometric formations or flower-like patterns.

Idriss I founded the Idrisid dynasty in Morocco, becoming the first Arab ruler of the area. He was also significant in spreading and promoting Islam through the region, and was directly descended from the Prophet Muhammad. He founded the town of Moulay Idriss. After his murder, his son, Idriss II, went on to found the city of Fez and expand the kingdom. Each year, the Moussem of Moulay Idriss II honours this past leader. It is held in Fez and its surrounding towns and cities, although the large festivities draw people in from much further afield. There are lively processions, complete with traditional singing, dancing, and musical instruments, with some parade goers on foot and others riding on the backs of donkeys, wearing colourful cloths on their backs. The date is based on the Islamic calendar and so changes from year to year.

Celebrations: Amariya at a Wedding

There are two very different traditional wedding celebrations in Morocco, those of the Berbers and those of the Arabs (and many city-dwelling Berbers). One element of an Arabic wedding that is unique to Morocco is the bride and groom being paraded around the room on an amariya, a type of large chair that is carried by four men. The couple is carried around the room to greet all of their guests and for well-wishers to extend their blessings and hopes for a happy future, to the couple.

While Arabic and Amazigh are the two main languages spoken in Morocco, and standard Arabic is the country’s official language, Darija is the form of Arabic that is most commonly used among the Arabic-speaking people of Morocco. Although it is similar in many ways to other forms of Arabic, especially those used in nearby Algeria and Tunisia, the Moroccan language has a few peculiarities that aren’t found in other Arabic-speaking nations. Indeed, some linguists consider the North African dialects of Arabic to be independent languages. Darija comes from various sources, such as old Arabic, Berber languages, sub-Saharan languages, Turkish, French, Spanish, and Italian. The colonial influences from the French and Spanish made a mark on the local language, and it’s not unusual to hear European words scattered in sentences.