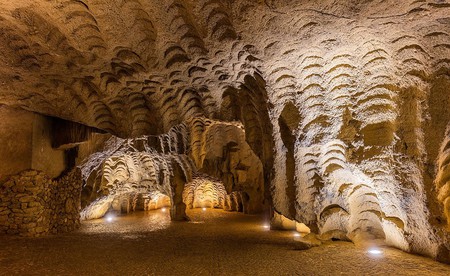 Often known as Europe’s gateway to Africa, Tangier is a buzzing cultural hub with a unique blend of local heritage and foreign influence. From the famous Strait of Gibraltar to the lesser-known history of Parc Perdicaris, there is more to this city than meets the eye. Here’s how to see it all…

Fancy a trip to Tangier? Then book Culture Trip’s 13-day Moroccan adventure where you’ll be guided through this city by one of our local insiders. 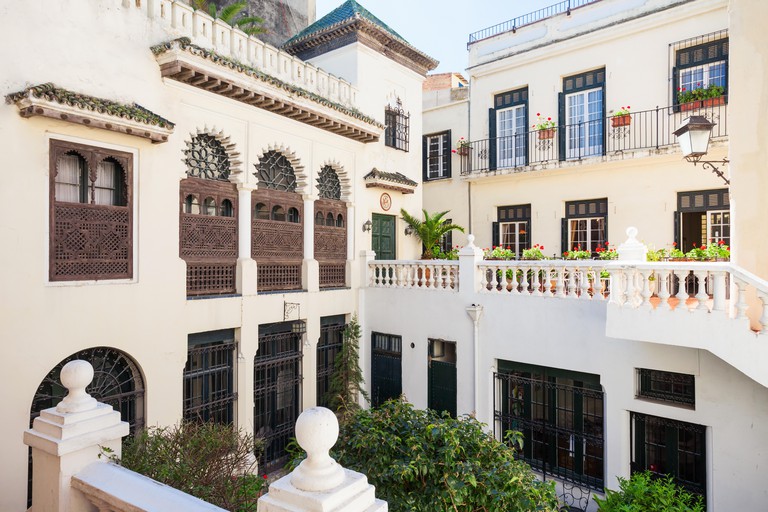 © Andrey Khrobostov / Alamy Stock Photo
Notable as the only US National Historic Landmark located on foreign soil, the Tangier American Legation Institute for Moroccan Studies is remarkable inside and out. The unique architectural character of the building, complete with colorful mosaic tiles and intricately carved doors, is complemented by the Legation’s cultural pursuits. Home to a research library, cultural center and museum, the Legation’s exhibits celebrate Moroccan culture as well as the long-standing good relations between the US and Morocco. Here, you can step back in time and view Tangier’s past through a series of documents, artifacts, photographs and artworks. 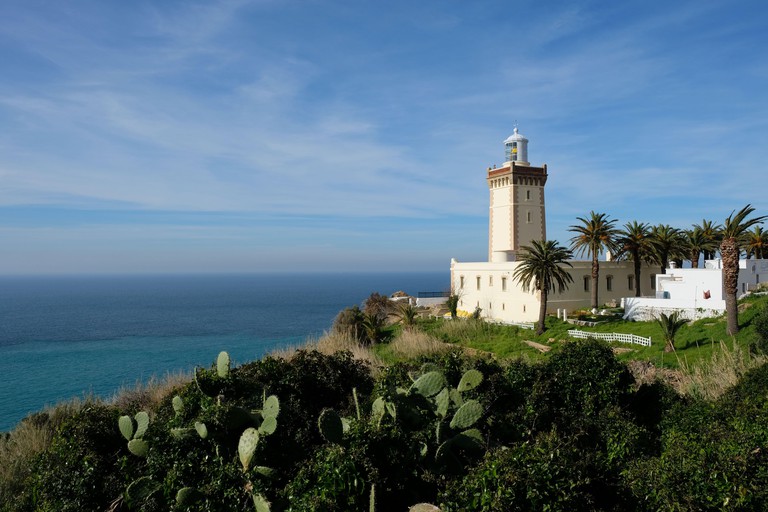 Located 6mi (9.6km) east of Tangier, Cape Malabata is the perfect escape from the noise and bustle of the city. Though it features hidden coves, quiet beaches and even the ruins of an early 20th-century castle, it’s most spectacular sights can be gleaned from its lighthouse – think unobstructed views of the sparkling Strait of Gibraltar. Don’t forget your camera, it’s definitely the best place to snap some pictures. 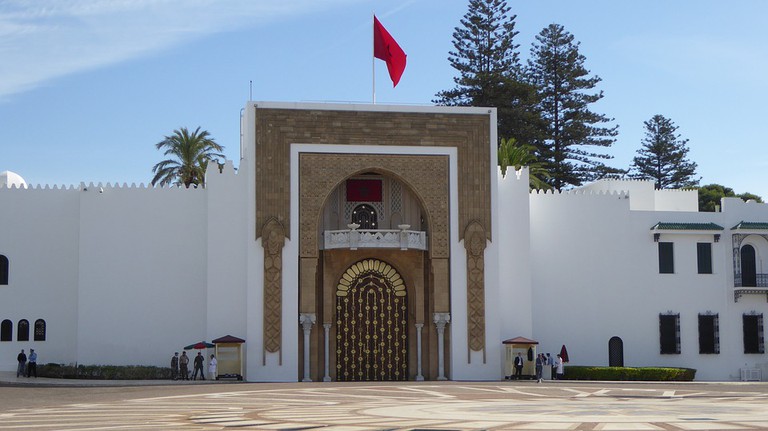 Royal Palace Morocco | © Max Pixel/ Free Great Picture
Built in the 17th century over the ruins of a previous castle, the Royal Palace of Tangier is strategically overlooking the city’s Medina and the Strait of Gibraltar. In the past, the palace was often used by the royal family on their visits to the city. Today, the ornate building delights architecture lovers with its elegant columns (some are even thought to be of Roman origin), marble fountains, intricately carved wooden ceilings and traditional tilework, while history buffs can take their time exploring the two museums on site. Located in the former Sultan’s apartments you will find the Museum of Moroccan Arts – displaying the finest works or art and traditional crafts from all over Morocco – and in the former kitchens, you will find the Museum of Antiquities – a space filled with ancient Roman finds and precious artifacts from the region surrounding Tangier, some even dating back to Neolithic times. 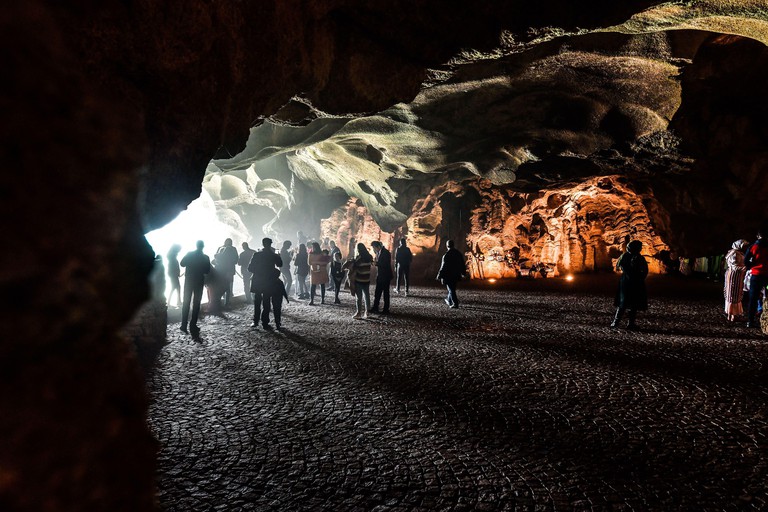 Caves of Hercules, natural calcareous caves directly overlooking the sea. | © Soudan E / Andia / Alamy Stock Photo
Located at Cape Spartel, the most northwestern point of mainland Africa and roughly 9mi (14km) west of Tangier, the Caves of Hercules are well worth a visit. Steeped in myths and legends, this ancient cave complex is said to be the place where, according to Roman mythology, Hercules rested on his way to complete the “12 Labors of Hercules”. Though you’re unlikely to see the stuff of legends today, the cave complex is impressive all on its own. With two openings – one that faces the sea, remarkably resembling the shape of the African continent and said to have been created by Phoenicians, and one that faces land, said to have been created by local Berbers – the cave complex offers ample tunnels to explore and wall markings to decipher. 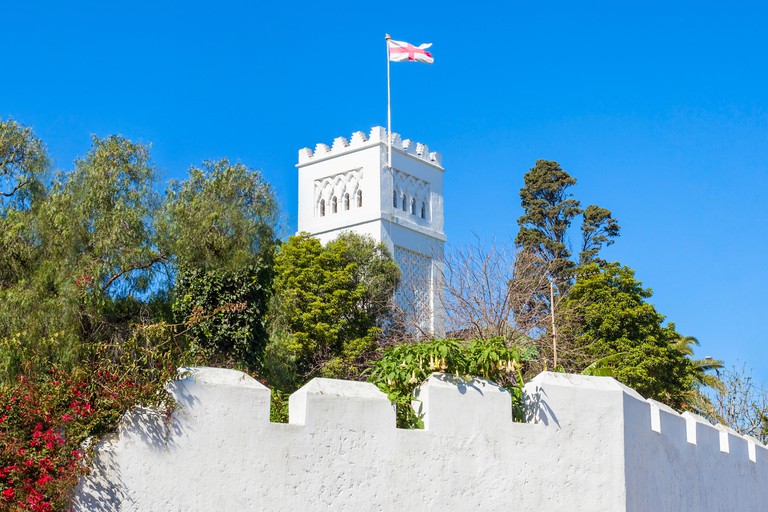 The Church of Saint Andrew,Tangier, Morocco | © Andrey Khrobostov / Alamy Stock Photo
A seemingly strange sight on the Tangier landscape, this Anglican Church with Moorish influences is a charming, history-filled stop. Originally built in the 1880s, on land donated to British residents of Tangier by Hassan I of Morocco, the church has since become a notable landmark. Most significantly, its roof and steeple feature in Henri Matisse’s painting, Landscape Viewed from a Window. Its associations with well-known persons don’t stop there, a number of memorial plaques around the church grounds commemorate figures such as Emily Keene, who first introduced the Cholera vaccine to Morocco, as well as Thomas Kirby-Green, one of the members of the “Great Escape” of 1944. 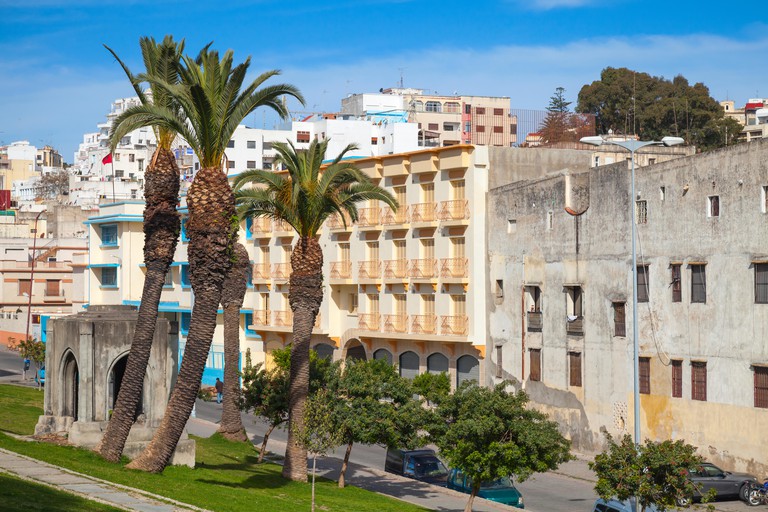 Street view of Jardins de La Mendoubia | © Eugene Sergeev / Alamy Stock Photo
Located in the heart of the city, not far from the Grand Socco, the Jardins de Al-Mendoubia are a green haven that offers respite from the heat and the densely packed streets. The gardens take their name from the building they surround, respectively the Commercial Court. Take a deep breath and let yourself take in the beauty of the fig trees and the palm trees as well as the enormity of the 800-year-old banyan tree at the entrance. You can also admire the decorative 17th-century bronze canons scattered throughout the courtyard and the unique architecture of the place. 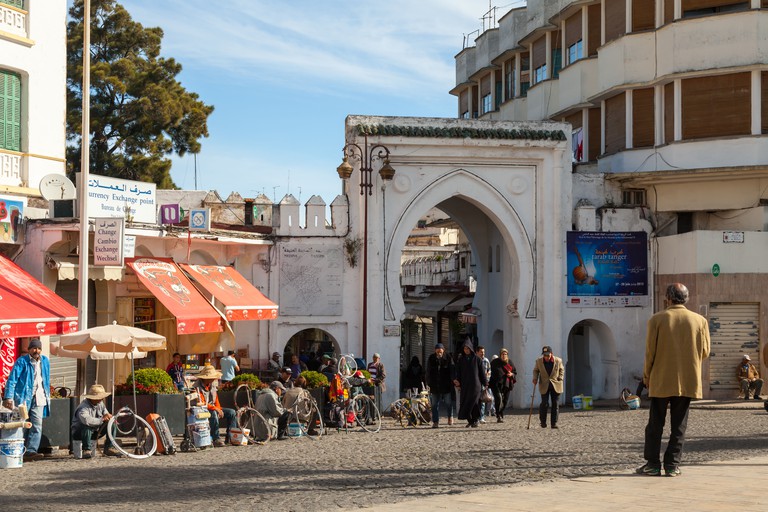 Bab Al Fahs. Ancient gate to Medina. | © Eugene Sergeev / Alamy Stock Photo
Not easy to miss as you’re winding your way through the city trying to take in all the sights, the Bab Al Fahs is the main southern gate of the Medina. Linking the old town and the new, the keyhole shaped gate opens up on the Grand Socco. The gate is a popular staple of many postcards so challenge yourself to see if you can take a more remarkable picture. 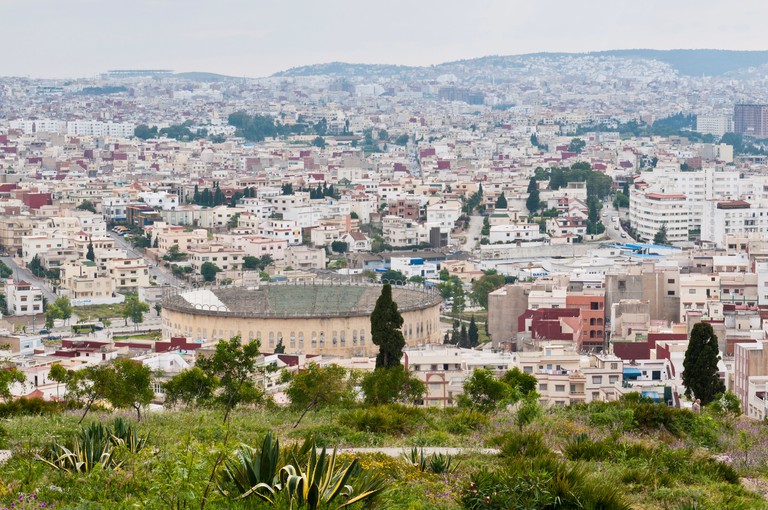 View of Tangier and Plaza de Toros from Charf Hill | © Domenico Tondini / Alamy Stock Photo
Built in the 1940’s and inaugurated in the 1950’s by the Spanish, Plaza de Toros, or the Place des Arenes, is Tangier’s only bullring. With a capacity of over 13,000 seats, bull fights were regularly held here until Morocco’s independence in 1956. Abandoned for several years, this place was classified as a historical monument in 2016 and as of 2021, it is set to undergo rehabilitation and renovation works. Though you can’t go inside, it is still worth checking out as you walk through the city.

The Tomb of Ibn Battouta

Building
Facebook
Email
Twitter
Pinterest
Copy link
Share
An important historical landmark, the sealed tomb of Ibn Battouta (1304-1369) is the modest resting place of Ibn Battuta, a Muslim Moroccan scholar and explorer who is known to have travelled more than any other explorer in pre-modern history, surpassing even Marco Polo. Though there isn’t much to see at the site, it might inspire you to learn more about Ibn Battuta’s travels and his writings. 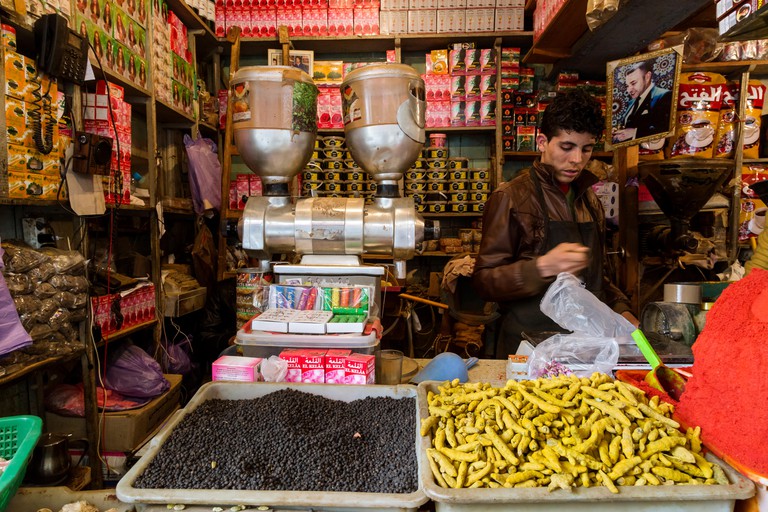 The Grand Socco – the word socco is a spanish adaptation of the arabic souk – was once a bustling marketplace, filled to the brim with vendors, performers and onlookers. Though it is still crowded, the square has now become deserted of market stalls and become popular for its other qualities. It is a great, central meeting point for all travellers as well as a useful transportation hub. Most importantly however, it is where old and new Tangier meet. From here, you can choose to hop in a cab and chase your next adventure, or walk through the Bab Al Fahs gate and get lost in the medina. 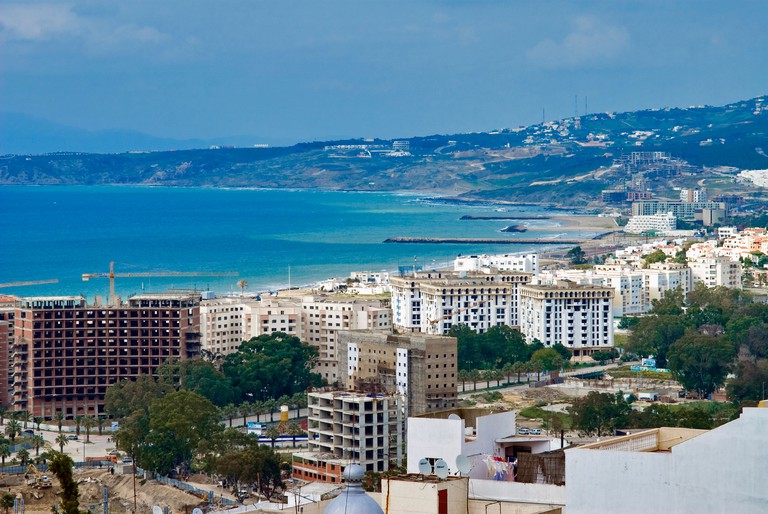 View from Charf Hill | © TONDINI Domenico / hemis.fr / Hemis / Alamy Stock Photo
If you’re after postcard-perfect views, Charf Hill is the place to go. Sitting 305ft (93m) above sea level, the hill offers panoramic views of Tangier and the coastline, from Cape Malabata in the east to La Montagne in the West, encompassing both the Atlantic and the Mediterranean. For the classicists among us, it is also said to be the burial place of the massive body of Antaeus after he was defeated by Hercules.

Art Gallery
Facebook
Email
Twitter
Pinterest
Copy link
Share
The Medina Art Gallery, founded in 1999 by artists Said Kadiri and Omara Salhi, is the perfect place for a break from your history-filled days, where you can simply admire spectacular works of art. Featuring artists from Tangier, Tetouan and Hoceima, the gallery places an emphasis on celebrating emerging artists alongside Moroccan masters. 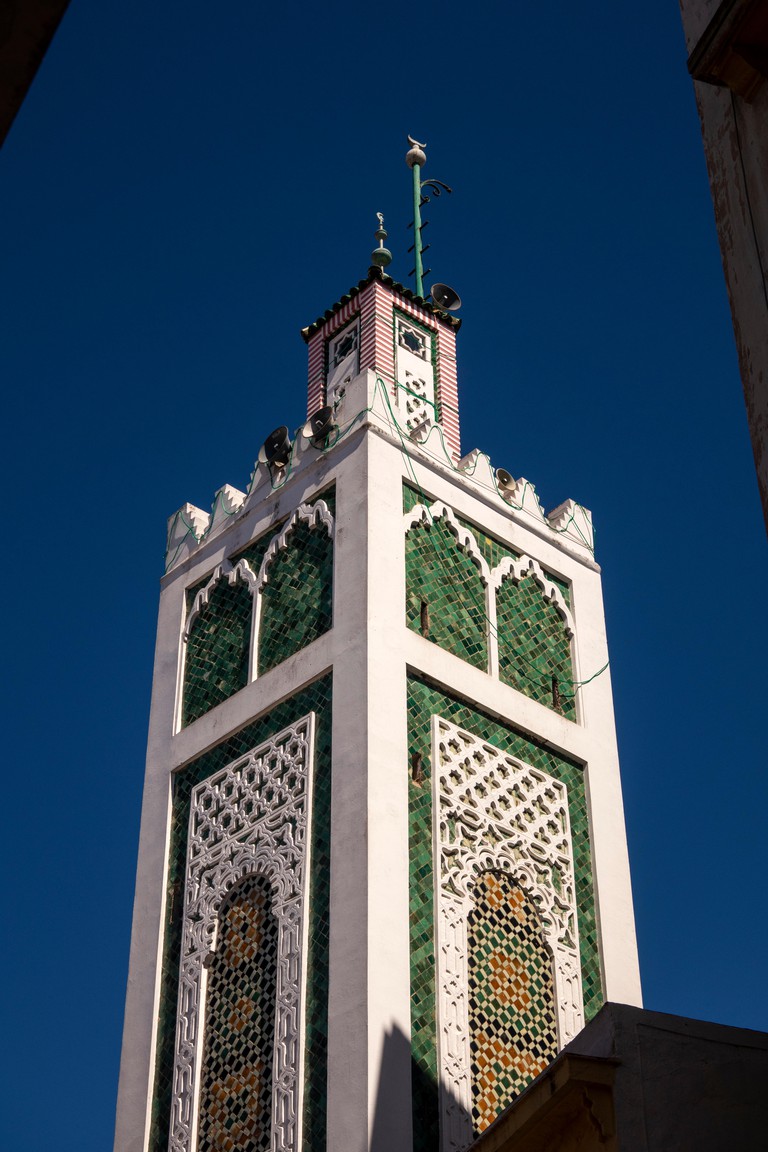 Grand Mosque of Tangier | © Neil McAllister / Alamy Stock Photo
Located in the heart of the city’s old medina, the Grand Mosque of Tangier, in its current form, dates back to the early 19th century. As the mosque is still in use, access is prohibited to non-Muslims. Not to worry though, you can still take in the geometrically-intricate entrance portal and Alaouite-era minaret from the outside.

Museum
Facebook
Email
Twitter
Pinterest
Copy link
Share
The Lorin Foundation Museum is an eclectic cultural centre and museum housed in one of Tangier’s oldest synagogues. Here, you will find an engaging collection of memorabilia, photographs, newspapers, posters and more, relating to the political and cultural life of Tangier since the 1930s. On the second floor, you will find an art gallery where travelling exhibitions of contemporary art are a regular feature.

Covering an area of 70ha (172 acres), the Perdicaris Park is a green oasis where you can wander through the forest, take in the thriving vegetation influenced by the unique surrounding climate and admire breathtaking views of the sea. The park’s history is an odd one, it bears the name of US diplomat Ion Perdicaris who acquired the property in 1872. Rather unfortunately, Ion was kidnapped in 1924 and though he was liberated, this experience persuaded him to move away from Tangier and the park has since belonged to the Moroccan State. Pack a picnic and revel in its beauty.