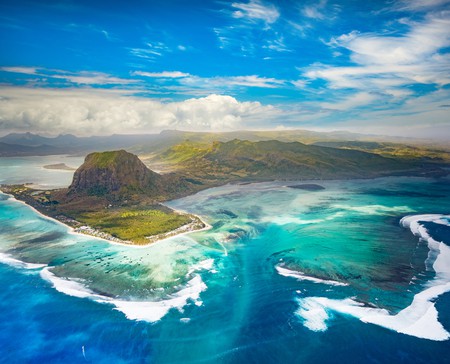 Baffling the most well-traveled of our world, this captivating phenomenon happens in the Indian Ocean, on the tropical island of Mauritius. Visible year-round, it is completely safe to swim in or even surf on! To ignite your wanderlust, here’s how the magic operates on this paradise island!

Did you know you can now travel with Culture Trip? Book now and join one of our premium small-group tours to discover the world like never before.

If you’ve never come across this island before, it’s chiefly known for being the home of the now extinct Dodo bird. More recently, Mauritius took the world by storm with the discovery of a lost continent beneath it, known as Mauricia. It’s now back with yet another fascinating trait, an underwater waterfall. Just to be clear, it isn’t an actual waterfall, but rather an illusion which can only be seen from up top. Located on the southwestern coast of the island known as Le Morne Peninsula, the phenomenon takes place in the turquoise lagoon. Thanks to the crystal clear water, it possible to see through it, being the key to unraveling the mystery.

Misleadingly, it isn’t the water which is actually falling into the unknown, but rather the sand and silt sediments which are in perpetual movement. Mauritius, being a relatively young island, happens to sit on an ocean shelf raised above seabed level. Off this particular coast, a gradual slope is noticed, abruptly ending in a 4000-meter-deep abyssal drop. Thanks to this marine topography, various shades of blue are visible, due to the movement of sand and silt deposits along these slopes. It is this unique harmony of shades which create the optical illusion which has won so many admirers across the world.

To best capture this gift from Mother Nature, there is nothing better than a helicopter ride above the Le Morne Peninsula. Enhanced with the UNESCO World Heritage peak, the view gets even more breathtaking and begs for unlimited snapshots and footage. The national carrier, Air Mauritius, offers great deals for this memorable flight.

Looking for travel inspiration for your next getaway? Browse our collections of Epic Trips, Mini Trips and Sailing Trips to explore the world with the help of our Local Insiders.