Tinariwen: Voices of the Desert

Tinariwen, a collective of Tuareg musicians, first formed amidst strife and conflict. The memory of the past remains strong even as the group transcends national boundaries and conflicts through their music. 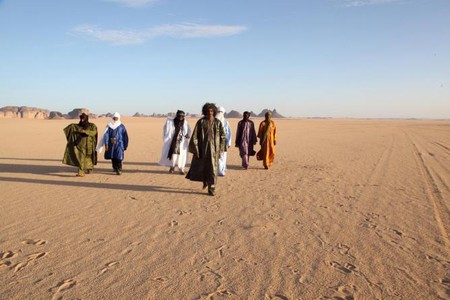 The sound of the guitar strings and the rise and fall of melancholy baritone join together, then separate, then come together again in an alternating harmony of instrument and voice kept together by the constant beat of drums. Tinariwen’s poetic lyrics and lamenting tunes emerged out of the painful collective memory of the exile of the Tuareg people from their homeland in Mali.

Traditionally, the Tuareg people are nomads who moved throughout the Sahara Desert region, but in the 1960s, their peoples and tribes were divided into several North and West African countries including Mali, Niger, Libya, Morocco, Algeria, and Burkina Faso. Attempts to create a separate Tuareg-Berber state have led to three rebellions since the 1960s: it is out of this backdrop of war and instability that led to the creation of Tinariwen, which means ‘the Deserts’ in Tamasheq, the language of the Tuaregs. 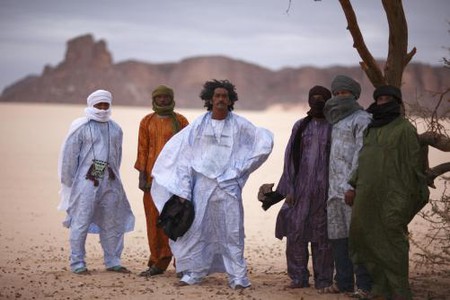 Several key members of the group including Ibrahim Ag Alhabib, Kheddou Ag Ossadou, Hassan Ag Touhami, & Mohammed Ag Itlale (‘Japonais’) met in Tuareg rebel camps in Libya having become exiles from their homeland in northern Mali during the Tuareg rebellions. Since leaving the militia and renouncing warfare in 1991, Tinariwen have produced five studio albums and performed in venues around the world. In 2001, Tinariwen helped to organise the Festival au Désert, a now-annual concert held in Essakane, Mali that highlighted Tuareg culture, music, dancing, poetry, and competitions. The festival is a place that is open to all, with ‘no doors, no gates and no money’ required to enjoy the celebration.

Despite their international fame and success, their home in the deserts remains the heart of Tinariwen.
By Elspeth Black