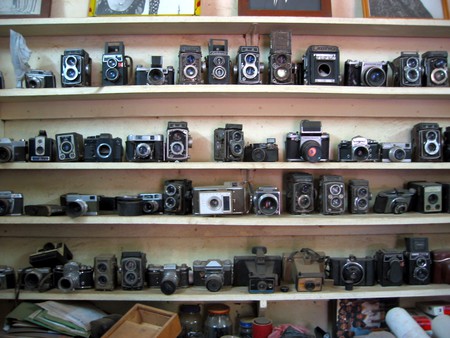 Noted for being one of Africa’s most iconic pop culture photographers of the early 1950s to 1970s, Malick Sidibé documented the cultural movement of Mali youths dancing their way out of their colonial past and into an era of freedom, expression and fashion. But what’s behind Sidibé’s success? Culture Trip investigates.

Whenever there was a dance, Malick Sidibé was invited. This was the general consensus in the Malian capital, Bamako, which Sidibé would later call home. Sometimes attending four or five parties in one night, the young photographer would rush in with his 36 mm film to capture the energies of a new generation, following the end of French colonial rule in Mali in 1960. The country was entering a new era, the people wanted to dance and they wanted Sidibé to picture it.

With the cha-cha-cha, twist and rock ‘n’ roll making its way into mainstream Bamako parties, African youths lost themselves dancing into the early hours. The boys formed clubs to impress the girls – the Sputniks, the Wild Cats, the Black Socks – and the girls arrived wearing their finest frocks to impress the boys. For the first time in Malian history, party-goers were able to get close to each other and the men could seduce women with their dance moves.

But Sidibé’s upbringing was far from the wild, euphoric nights pictured in his images. Born in what was then regarded as French Sudan in 1936, Sidibé was raised by a family of shepherds in a small town located 300 kilometers from the capital. By the tender age of five he was rearing sheep and by eight, he was herding cattle before being finally chosen to attend the ‘white boys school’ by his father and the village chief when he was ten-years-old. Here, Sidibé began drawing – pictures of nature and animals – and won prizes for his excellence, one of which was an art book by French romantic artist, Eugène Delacroix.

Sidibé’s talent soon caught the attention of his peers and educators. He was commissioned to draw for official events such as French Independence Day, girls would approach him to draw on their handkerchiefs for embroidery and in 1952, he was sent to the prestigious École des Artisans Soudanais at the request of a colonial commander. Here too, Sidibé excelled to the top of his class and was selected to help decorate the studio of Bamako’s leading society photographer, Gérard Guillat, aka ‘Gégé’. This marked the beginning of a blossoming partnership between the two and Sidibé’s gateway to success. 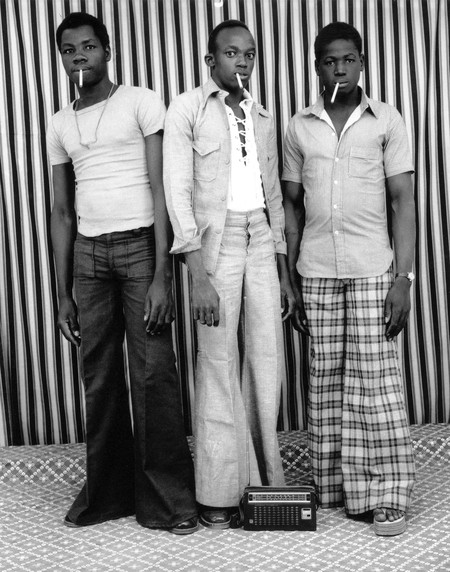 Asked by ‘Gégé’ if he was interested in working in photography, Sidibé jumped at the chance and began working in Guillat’s printing shop where he manned the till, helped develop film and was given his first camera, a Brownie. Starting with weddings and christenings, Sidibé was sent to picture social events. He quickly received invitations to attend local dances too, where his little camera would begin documenting the social and cultural revolution taking place in the capital city.

Early photographers like Seydou Keita, who also documented Bamako society during its era of transition, worked with plate cameras and flash, making them less mobile and less desired – this was where Sidibé had the advantage over his fellow photographers. Popular and in demand, the young photographer cycled from party to party between midnight and 4am, at times returning to the print shop at 6am to develop over 400 images captured from the night’s adventures. Days later, people would arrive en masse to find their pictures and boast to friends and onlookers about their prized dance partners – even if they didn’t buy them. Through his black-and-white pictures, Sidibé captured the pride of this generation and his work empowered them. 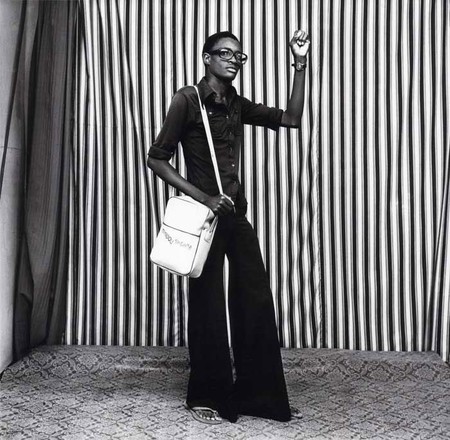 In 1964, Sidibé left Guillat’s print shop to set up his own studio, ‘Studio Malick’, where young Malians would arrive by motorbike or Vespa to brandish their latest possessions and new Parisian fashions in front of the camera. In the studio, they were encouraged by Sidibé to stand in strong and proud positions to accentuate the energies and mood of the era. His laid-back attitude often saw photo shoots turn into parties and locals would swing by to celebrate, eat and drink, whilst the host (Sidibé) slept in the developing room. His studio alone brought to life the attitudes of the new party-spirited generation.

Over three decades, Sidibé moved with the times and documented the social and cultural changes of Mali with a distinguishable joie de vivre. Subsequently, today he is considered one of the key cultural photographers of his generation and his work is still celebrated internationally. His pictures have featured in some of the most prestigious galleries and exhibitions around the world, to include the Galleria Nazionale d’Arte Moderna in Rome, Italy; Harvard University Art Museums in Cambridge, USA; the Barbican Gallery in London, England; and many more. Today, archives of his work can be found on display at Fondation Cartier in Paris as well as part of a private collection, The Contemporary African Art Collection (CAAC) belonging to French art collector, Jean Pigozzi.

Sidibé is recognised for his talents, par excellence and in 2003 he received the Hasselblad Award for photography. Not long after this, Tigerlily Films dedicated a documentary to the photographer, filming him at work in his studio in Bamako and in 2008, he became the first African and the first photographer to be awarded the Golden Lion Award for Lifetime Achievement at the Venice Biennale.

An avid childhood collector, Sidibé unwittingly archived hundreds of thousands of his pictures and today he holds a collection of negatives taken up to 50 years ago. These images document the energies and transition of newly independent Malians through their spirited dancing and in doing so, helped to define Sidibé as “The Eye of Bamako.”