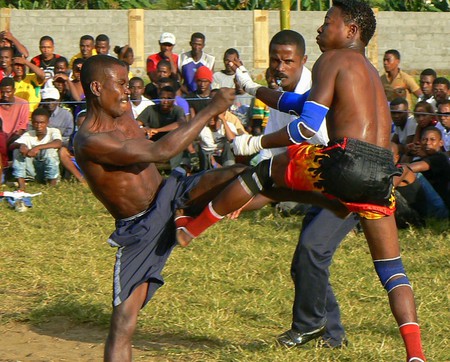 Though the origins of moraingy can be traced back to the 15th century Sakalava kingdom in the southwestern region of Madagascar, today it is practised it in the neighbouring islands of La Réunion, Mauritius and Comoros. This genuine warrior battle features no weapons, and no body protection – here’s everything you need to know.

A battle with no fixed rules

Moraingy is an intense fight sport also known as Malagasy boxing, and its participants are known as‘fagnorolahy’. Rules vary according to region, and the winner depends largely on the referee, who announces the victor in a subjective or objective manner. Because of this, knock-out rounds are sometimes required to win, or the number of successful hits are simply counted to identify the winner.

As a sport, moraingy holds the record for the shortest round duration among existing fight sports worldwide – fights are normally composed of 30-second rounds. Fighters win or lose, and there is no second chance (unless the referee chooses to add more third rounds). Scratching, pinching, pulling hair and striking vital points of the body are forbidden.

From culture to a lucrative business event

Moraingy was once considered both a game and training for self-defence – children usually start playing moraingy at 10 years old. Today, moraingy fights attract visitors from different parts of the world. The fight is accompanied by traditional music which plays in the background, and like a festival, it has become a lucrative business for organizers.

Normally fights are organized every Sunday after the full moon of each month, though nowadays you can enjoy moraingy shows on weekends or on market day. Moraingy national tournaments are sometimes organized, and the winners are welcomed home like celebrities once they return to their village. The winner is not given a cup, but instead receives a car, motorbike or a large amount of money.

Like all traditional disciplines, there is neither a national federation nor moraingy training centers in Madagascar – instead, expertise is passed down from generation to generation. Over the last few years, young women have started to take part in moraingy, and are known as ‘fagnorovavy’. 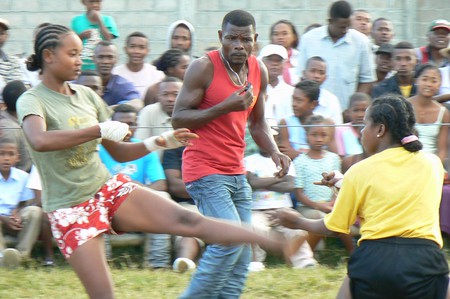