The news in 2011 of Wangari Maathai’s death inspired reflection on her important dedication both to the African environment, and to the political scene in Kenya. In 1977 she founded the Green Belt Movement which aimed at impeding deforestation, saving African biodiversity and creating job places for women. 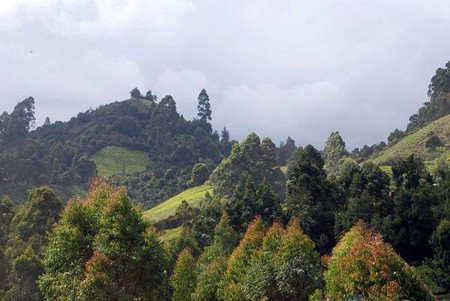 The world has few female Nobel laureates, and Africa even fewer, but one environmentalist stands out. Political and environmental activist Professor Wangari Maathai became the first African woman to win the Nobel Peace Prize in 2004, awarded for her tireless contribution to sustainable development and for drawing attention to political oppression in Kenya. Prof. Maathai’s Green Belt Movement has successfully planted over 20 million trees and has helped women work their way out of poverty, and its enormous environmental and social impact is testament to the drive and determination of Maathai. 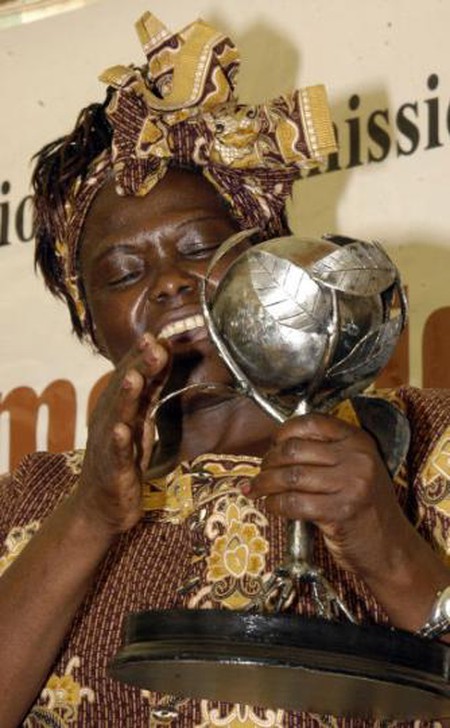 Maathai receiving a trophy awarded to her by the Kenya national human rights commission for her contribution towards humanity, 2006, | © DEMOSH / Wikimedia Commons

Born in Nyeri, rural Kenya, in 1940, Maathai excelled academically from an early age, and upon leaving school, she intended to study at the University of East Africa in Uganda. Yet Maathai was one of 300 students selected by the Joseph P. Kennedy Jr. Foundation to study in the USA, and there she gained first a bachelor’s of science in Benedictine College, Kansas – majoring in Biology – then a Masters in Biology from the University of Pittsburg. Returning to Kenya, she then became the first woman to obtain a doctorate in East and North Africa, earning a PhD from the University of Nairobi, where she was teaching Veterinary Sciences.

In 1976 she joined the National Council of Women of Kenya, becoming its chairman in 1981 for six years. It was here that she first had the idea for community-based tree planting, both as an environmental scheme, and as a means of providing jobs for the unemployed. From the grassroots of her first nursery, the idea developed into the Green Belt Movement, an organisation that continues implement to economic development through environmental preservation and eco-tourism. Whilst not only benefiting women, from an early stage Maathai realized that the organization could be used as a tool to implement fundamental change in the lives of female Kenyans. Thus, GBM also trains women in skills and industries such as forestry and beekeeping, that they might simultaneously earn an income whilst preserving their land.

While the organisation has seen enormous success and acclaim, it was not without its obstacles en route. In the late 1980s and early 1990s, during the time of elections, the group campaigned for constitutional reform, voter registration and fair elections. Their pro-democracy stance came under the scrutiny of the single-party government, who persistently attempted to halt Maathai’s vocal protesting. Whilst she began to be recognised for her efforts globally – both in the political and environmental arena – she continued to be vilified in her country. In 1991 she received the Goldman Environmental Prize in San Francisco and the Hunger Project‘s Africa Prize for Leadership in London, yet the following year in Kenya, she was arrested and held in prison for a day and a half, charged with spreading malicious rumours. 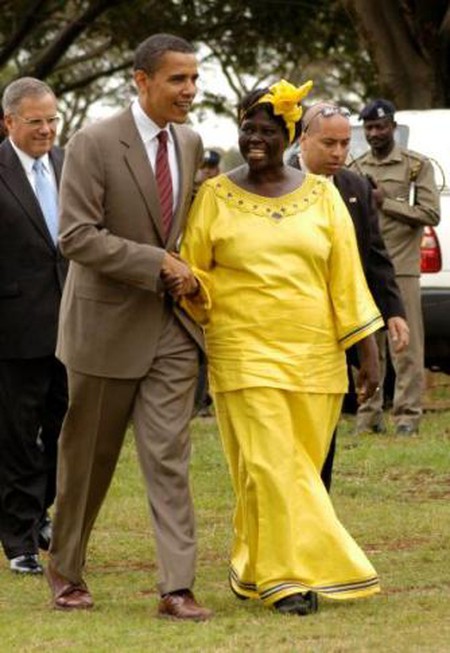 Such attempts at suppression only fuelled her determination, leading Maathai to run for parliament in 1997 as candidate for the Liberal party, though she withdrew just before the election. In 2002, though, she returned to politics, gaining 98% of the vote to represent Tetu constituency. Two years later, she won the Nobel Peace Prize for her “contribution to sustainable development, democracy and peace”. She was also named UN Messenger of Peace in 2009, with a focus on her environmental work.

In 2011, Maathai died aged 71 while undergoing treatment for cancer. The political, ecological and environmental vision of such a progressive figure has left a lasting impact both on her native Kenya, and across the world. From this perspective, Wangari Maathai is not dead; she has inspired and will continue to inspire many other people to make acquaintance with what their land can offer in order to cure and preserve it.