Naomi Wanjiku Gakunga is a Kenyan sculptor who creates beautiful and intricate wall-hangings and sculptures, yet there is more to her work than pure aesthetics. As the Ituika – Transformation exhibition of her works at October Gallery in London demonstrates, these pieces – particularly when seen collectively – create a complex narrative that refers to the artist’s heritage, through both their materials and their materiality. 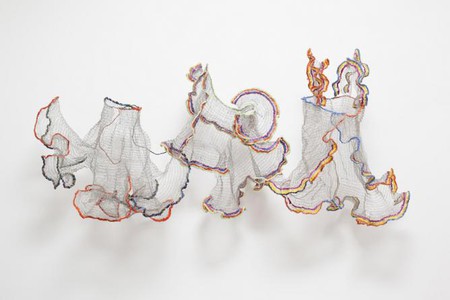 Observe Gakunga’s work from a distance, and the intricate wall-hangings read as textile-like patterns and utilise the repetition of objects to divorce them from conventional association. The meticulous sculptures are woven from sheet steel, tin cans and metal wire, with the occasional bead or colourful thread, yet from far off the delicate and intricate patterns could be made entirely from fabric. Gakunga, who is now based in Texas, grew up among the Kikuyu people of Kenya, and the creation of these woven panels is a direct reference to the traditional Kikuyu women who would weave baskets from fibre extracted from makongo. Here then, initially, the overall form of Gakunga’s works create ties to her past and her heritage. As the artist herself says, 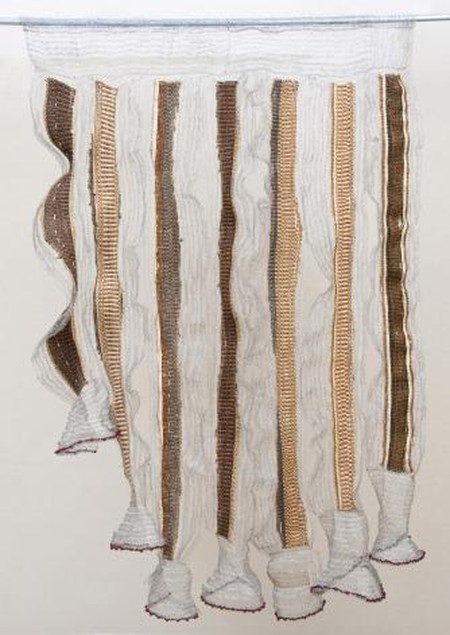 ‘String is entwined in the life of a Kikuyu woman, from the moment she is born until she departs.’

Yet approach the pieces more closely, and they begin to explain themselves more explicitly in terms of materials. Panels of colour become tin cans ­– flattened, partially unrolled or left entirely intact – delicate webs become steel wire, vivid colour-ways become oxidised metal. There is a strange and uncanny shift as the ethereal pieces are suddenly imbued with heaviness from the literal weight of materials. Here too, is where the collective impact of her works begins to take effect, particularly with pieces that use similar objects in different ways. For example, Mũgogo – The Crossing (2012) draws parallel lines with tin cans that have been tied together end-to-end: their initial incarnation only becomes clear upon closer inspection. This too is evident in the unrolled and spliced cans of Ituika – Transformation, which are revealed as not just material that is a means to engineer a pattern, but a transformed object that was originally created for an entirely different purpose. The sheet steel that Gakunga uses is a material that is ubiquitous in Kenya, and the artist’s use of it is informed by its association with the Mabati Women’s Group and their use of the material in the 1960s for empowering housing projects. 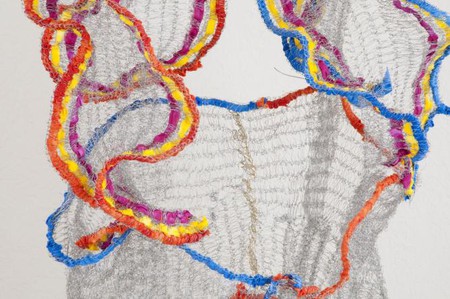 Fundamental to her work, though, is the transformation of the objects, and how Gakunga manipulates them in order to be able to create such a dialogue in her work. Appropriated and found objects have a long history in the art world: even the Tin Can is a somewhat loaded object, particularly when names such as Warhol and Piero Manzoni enter into the conversation. Yet somehow, Gakunga manages to divorce the objects from such a dialogue. As rusted and oxidised objects, they are removed from their implicit iconography, as their surfaces become beautiful and intricate matter. From a distance, they appear almost as large-scale beads; then as they slowly start to reveal their initial incarnation, it is here that Gakunga can insert her own specific narrative attached to them, a narrative that sits entirely outside the Western Canon. For this re-use and recycling is not influenced by the Found Object, but is rather a trope employed by a number of artists from across Africa, who refer to a specific cultural inclination to re-use the discarded. 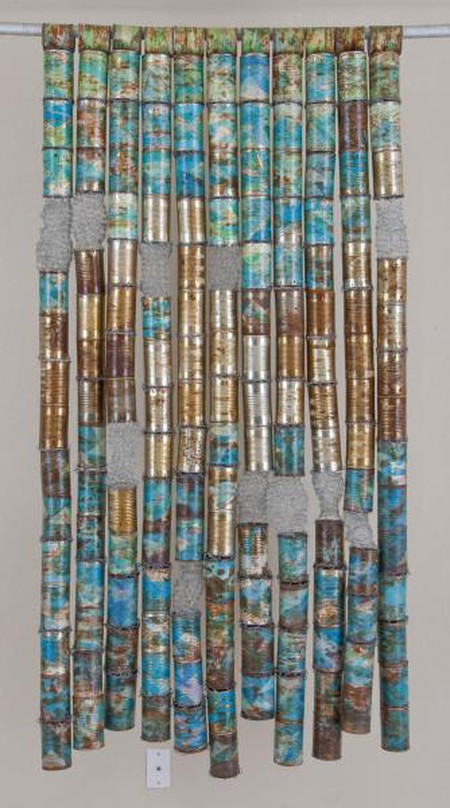 Further to the textile-like patterns of the sculptures’ overall forms, additional patterns are found across the surfaces of the metal that has been rusted, adding a further dimension to these complex pieces. The sheet metal that Gakunga has used in patchworks of squares remain large enough that, when viewed up-close, each individual panel takes on an almost painterly quality. The waves and undulations of the oxidisation become landscapes; look almost like satellite images of deserts or seas, and explore the physicality of a work that can nonetheless create an imagined, pictorial space. Spend long enough before one of these pieces and they create a strange oscillation between two-dimensional pictorial space and their physical presentness as objects, which evokes the works of process painters such as Callum Innes or Ian Davenport.