An Introduction to Nairobi's Matatu Culture 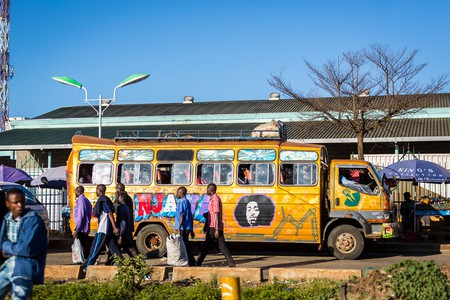 ‘Moving discos’, ‘moving museums’ and ‘matatu menace’ are some of the phrases used to describe matatus – and the culture at large – in Nairobi. These privately owned shared-ride minibuses form the bulk of public transportation. They exhibit colourful artwork on their exterior and interior, announcing their presence with thunderous music as they hustle their way through traffic in the Kenyan capital.

Emergence of the matatu ‘mayhem’ culture

Matatus operate along a specific route, complete with government-designated numbers to identify them. Each has a crew of two; a driver and a conductor. The latter are like stewards, with different functions – they charge passengers and signal the driver when to pick up or drop off passengers. Pick up and drop off points are called stages.

After independence, Kenya had a well established public transportation service owned and operated by the government. They charged thirty cents at the time and the name of the coins in the Kikuyu language gave rise to the word ‘matatu’.

Private owners were allowed to operate their own public-service vehicles. To effectively compete with the government, they opted to use smaller buses with a capacity of 14 passengers. These were fast and took less time to fill. At the time, the only available manufacturer was Nissan. So 14-seaters in Kenya came to be known as ‘Nissans’. Today, Nissan has been replaced by Toyota, but the old name is still widely used.

With time, as fuel prices increased, matatu owners responded by resorting to minibuses with a higher capacity. These privately-ownded minibuses gradually came to replace the government-run ones.

As with any free market, price alone was not enough to attract customers, particularly the youth. Matatu owners had to think laterally to tap into this market.

Differentiation started with the installation of music systems and quickly moved on to artwork on the sides of the buses. These featured all manner of messages and celebrities such as hip hop artists, TV and movie stars, footballers and even religious messages. Matatus came to sport customised bodies, with lively LED lights lining the interior and exterior. This was finished off with large flat-screen monitors on the front deck . Some matatus have gone further, including screens on the back of every seat, Wi-Fi, power sockets, CCTV and flat screens on the outside of the vehicles.

Not everything that glitters is gold as the saying goes and appearances weren’t enough. The crew’s performance has to match the look of their rides. They achieve this by driving fast and knowing all the back routes to evade traffic. If a bottleneck is unavoidable, then the drivers need to know how to weave in and out of the road by driving on the shoulder of the road. This practice is known as ‘overlapping’. Unsurprisingly, knowing how to get out of trouble with traffic police is a key skill for matatu drivers. On top of all this, the crew (driver and conductor) have to be fashionable.

In 2004, the transport minister abolished matatu art and all the entertainment fixtures. He also brought in a host of other road safety rules that later came to be known as the ‘Michuki Rules’. These were relaxed in 2014, but during that ten year period there were several changes in the public transportation sector – including compulsory seat belt use and a no-noise rule (not just music – matatus were supposed to display their route number and wait for passengers in total silence).

After President Uhuru relaxed the Michuki Rules, Nairobi’s went back to their chaotic norm. Booming music, conductors shouting each other down to attract customers, and the artwork was stepped up a notch.

Matatu culture is loved and loathed in equal measure. For visitors and the older generation, they represent nothing short of mayhem while to the urban youth, they are an identity.