A Letter From Nairobi: Reflections On Performance Art In Kenya

Donald Kuira Maingi reflects on the work of Kenyan artist Ato Malinda, who is expanding the boundaries of performance art in East Africa, and engaging with global discourses of contemporary art. Maingi interrogates the divide between the performance space of the gallery, and the world of public, politically engaged art, and wonders if the two can be reconciled.

I met Ato Malinda — one of Kenya’s first performance artists — for the first time in 2009. She had just arrived in Kenya from the United States where she studied art history. Our meeting in Nairobi was not coincidental as I was at the time leaving for the UK to pursue my graduate studies in the history of contemporary Kenyan art while she was relocating to Kenya to be part of that history. I remember observing in amazement her performance, Looking at Art; Looking at Africa; Looking at Art while she animatedly strode around the gallery space at Nairobi’s Goethe Institute in 2009. The performance was augmented by her chequered dress inscribed with an alternate patterning of motifs such as an African mask, a calabash and a drawing derived from East African rock art, all of which were also painted on her body to emphasize continuity in design. I could only at the time describe the performance by its formal characteristics as I waited for the moment when the gallery space would be charged, electrified by the aura of performance I expected, but that did not happen. Instead, we were locked into an animated repeated sequence of circular movement between a mound of red soil, some bricks and sticks. I and some other Kenyan artists were left in shock at such a global form of contemporary art. We may have been regarded as ignorant of the shock factor in contemporary art but we expected to be invited into the performed narrative to create its end product rather than to anticipate its discourse and theory. We wanted to share in the performance, to be a part of its story.

We may have been wrong, we thought. One of our friends, Solomon Muyundo, popularly known as Solo 7, had in 2008 redefined our understanding of performance as a contemporary art form. He had risen from being a sign painter in the slums of Kibera to international fame at a critical period in Kenya’s history. It was during the 2007/2008 post-election violence when in the midst of violent chaos he ran across the murderous vigilantes, risking his life for repeating the inscription ‘Keep Peace’ which he legibly sign-wrote on gates, walls, bars, trees, virtually any visible space – such as the electric meter reading on a wall, as shown in the photograph. While the news at the time had designated the Kibera slum as a hotspot for ethnic violence, Solo 7’s fame also rose among the vigilantes who contributed to his sign-writing with their own, creating a social dialogue that eventually brought peace in the region. While Solo 7 continued with his sign-writing practice, his experiments with painting on canvas within the institutional context of the gallery did not work as well. 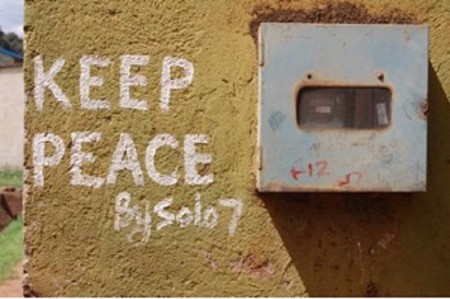 But what does Malinda’s story tell us? I am at once persuaded to try and negotiate the essence of performativity as an art form as it is encountered in the gallery space compared to its encounter in society. I believe these two contexts do actually share a common feature in their capacity to inspire the general public, inspiring their imagination and inspiring older artists such as George Bertiers, Richard Onyango and many others regarding how artistic practice can be embodied within a performance – be it within society or inside the gallery.