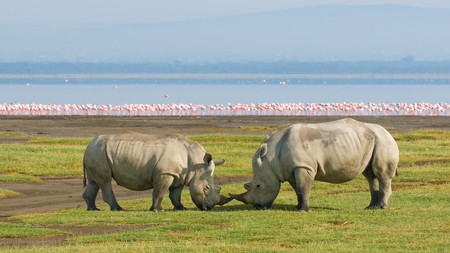 Lake Nakuru National Park, just a three-hour drive from Nairobi in the Great Rift Valley of southwestern Kenya, boasts an abundance of wildlife and spectacular landscapes. Think black and white rhinos, lions, leopards, cheetahs and hippos occupying euphorbia forests, acacia woodlands, savannah grasslands and rocky escarpments around a shallow, alkaline lake. Planning your visit to Lake Nakuru National Park? Discover our guide to one of the best and most easily accessible safari destinations in Kenya.

Tempted to experience it for yourself? Lake Nakuru National Park is one of several fantastic destinations featured on Culture Trip’s exclusive seven-day Kenya tour, led by our local insider. 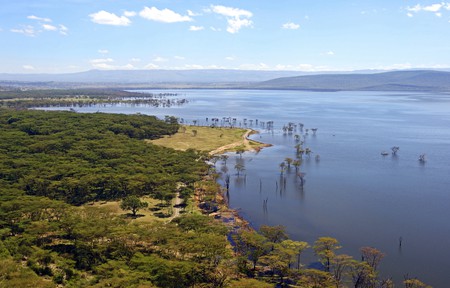 Lake Nakuru has been recognised as a conservation area as far back as 1957. It was declared a bird sanctuary in 1961, before being officially announced as a national park in 1968, extending its boundaries to cover a total area of 188sqkm (73sqmi). In 1977, endangered Rothschild’s giraffes were introduced from western Kenya to protect their population, and in 1984, it was designated as Kenya’s first rhino sanctuary.

The lake itself, which lies at 1,754m (5,755ft) above sea level, became a wetland site of international importance under the Ramsar Convention in 1990, and, in 2011, was awarded Unesco World Heritage status, along with nearby Lake Bogoria and Lake Elementaita. It’s also internationally recognised as an Important Bird and Biodiversity Area (IBA), home to an estimated 450 bird species. 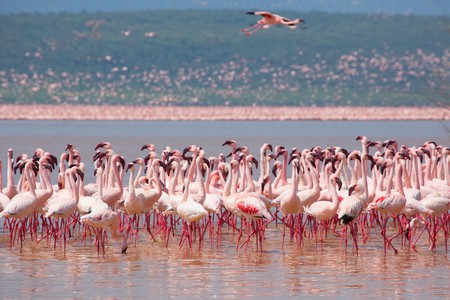 Up until 2012, Lake Nakuru was renowned for its vast flamingo population (sometimes exceeding 1.5 million), which covered the lake in a blanket of pink. Since 2012, rising water levels from heavy flooding have drastically reduced this phenomenon, shrinking the flamingos’ breeding and feeding grounds. More recently there have been promising signs of flamingos returning, which bodes well for the health of the park’s biodiversity and its tourism industry.

Which animals to look out for 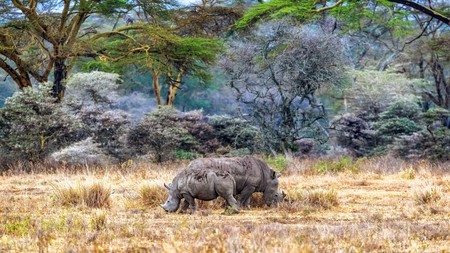 A group of rhinos is known as a crash

Flamingos might not be as abundant as they once were, but there’s so much other wildlife to see while you’re in Lake Nakuru National Park. It’s one of the best places in Kenya to see rhinos in the wild – there are roughly 100-150 individuals in total, of which 80 percent are white rhinos and 20 percent black. The park also has a strong reputation for leopard sightings, although these creatures are notoriously difficult to spot owing to nocturnal hunting habits and camouflaged fur. 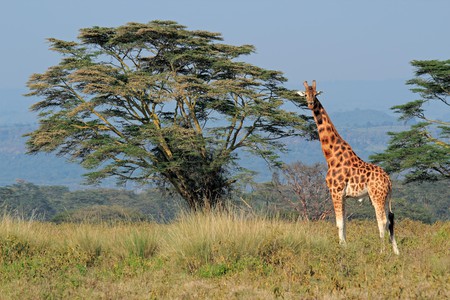 Lions, cheetahs, hippos, buffalos, hyenas, giraffes and zebras are among the 50 (or more) mammal species living in the park. You can expect to see several types of large python, which are especially prevalent in woodland areas. Also keep an eye out for ostriches, African fish eagles, woolly-necked storks and dusky nightjars, plus an array of other bird species. 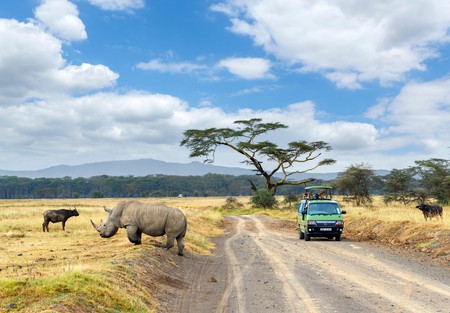 Given that Kenya sits directly on the equator, temperatures don’t tend to fluctuate a great deal throughout the year. Due to Lake Nakuru National Park’s high altitude, it usually avoids the scorchingly hot weather you might expect elsewhere in the country, with temperatures typically hovering around 25-28C (77-82F) during the daytime and dropping overnight to around 10C (50F).

The best time to visit is during one of the dry seasons – either between July and early October, or January through until early March – as these months provide optimal conditions for wildlife viewing. April and May tend to be the wettest months, and are therefore best avoided, as many animals seek shelter during heavy rains, while dirt tracks used for game drives are rendered unfit for purpose. 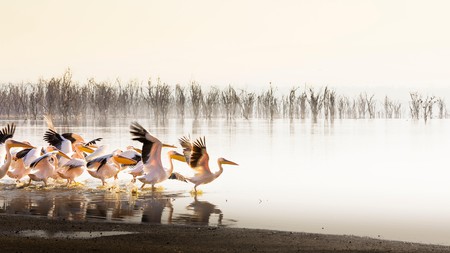 Lake Nakuru is a haven for pelicans

Getting from Nairobi to Nakuru by car is very straightforward – just follow the A104 road the whole way there. From Nakuru town, the entrance to the national park is 4km (2.5mi) to the south. If you’re coming from Maasai Mara National Reserve, it’s around a five-hour journey along a combination of tarmacked and gravel roads.

It’s also possible to fly from Nairobi to the Naishi airstrip at the southern end of Lake Nakuru National Park, which only takes half an hour – although this route doesn’t always operate, so it’s worth checking the schedules closer to the time of your visit if you intend to fly. 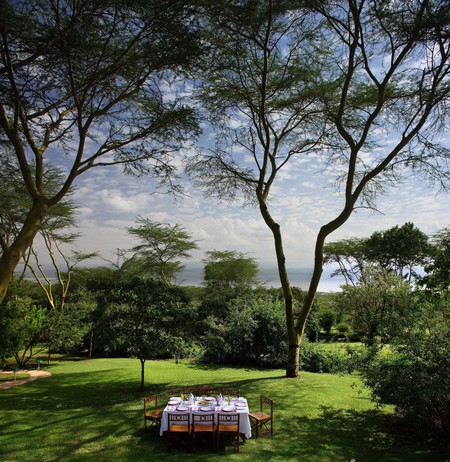 There’s an excellent variety of places to stay both within Lake Nakuru National Park and just outside – it all depends on your budget and what kind of experience you’re after. Most lodges and camps offer safari experiences, including game drives, bush walks and bird watching excursions with experienced park rangers.

Within the park, Lake Nakuru Lodge is a delightful eco-friendly retreat, totally surrounded by wilderness, meaning you’ll have a chance to spot wildlife directly from your accommodation. Facilities include a large outdoor pool, a spa, and an on-site restaurant serving delicious Kenyan and Indian cuisine, plus traditional bush barbecues.

Sarova Lion Hill Game Lodge, overlooking the eastern shore of Lake Nakuru, is another outstanding choice, featuring 67 luxurious villas, a panoramic terrace bar and an organic vegetable garden that provides fresh ingredients used in the on-site restaurant. Flamingo Hill Tented Camp and Mbweha Camp, both on the outer edges of the park, are also options worth considering.

If you don’t mind staying just outside the park, there are plenty of hotels in Nakuru town, such as Sarova Woodlands Hotel and Spa, which offers spacious, air-conditioned rooms, two restaurants serving an eclectic mix of cuisines and an outdoor pool. You can spend a night there, and enjoy a game drive in Lake Nakuru National Park, as part of Culture Trip’s specially curated seven-day Kenya adventure.

What else to do 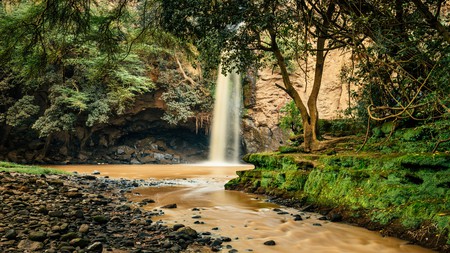 Although going on a wildlife safari is the biggest draw of visiting Lake Nakuru National Park, it’s by no means the only thing to do while you’re there. Take a trip to Baboon Cliff, on the northwestern side of the park, for spectacular views of the lake, and visit the Makalia Falls – a beautiful waterfall on the southern side of the park, with unusual rock formations and a hiking trail nearby. You’ll see plenty of birdlife here, and possibly other animals such as buffaloes, drinking from the rock pools.

Just outside the park, on the outskirts of Nakuru town, the Hyrax Hill Museum provides a fascinating insight into the ancient communities of the Great Rift Valley, through a series of archaeological excavations. Meanwhile, Menengai Crater, a short drive out of town, is one of the largest calderas in the world – another superb hiking spot with magnificent vistas of the surrounding area.

Looking for somewhere to stay in the capital? Discover our guide to the best hotels in Nairobi, bookable on Culture Trip.