A New Perspective: Introducing Côte d'Ivoire To The Venice Biennale

The 2013 Venice Biennale introduces ten new participants never before featured in the exhibition. Amongst these new nations is the Ivory Coast, or Côte d’Ivoire, with a pavilion curated by Yacouba Konaté, a curator, art critic and professor of Philosophy at the Université de Cocody in Abidjan. He has written extensively about contemporary African culture and politics, which strongly imbues the exhibition Traces and Signs. Here’s a round up of highlights from the Ivory Coast.

The Ivory Coast joins a host of newcomers at this year’s Venice Biennale with a pavilion that looks to raise awareness of the nation’s increasing emphasis on the arts after suffering from over a decade of difficult crises. While known for its masks and statues, which greatly influenced many of the leading figures of Western Modern art, this exhibition introduces the multiplicity of style and schools resident in the country today.

Titled Traces and Signs, the pavilion presents the work of four artists. Frédéric Bruly Bouabré is a self-taught artist, prolific writer and a leading figure in African contemporary art. His highly individual work, recognisable for its naïve style, fits well within the pavilion’s theme in his aim to reinterpret and remap his disconnected vision of the world. Much like Bouabré, Tamsir Dia is also an explorer of signs. His paintings possess an ochre tonality indicative of sub-Saharan roads and landscapes; the pictures’ surfaces are made up of layers reminiscent of colliding seismic plates. Wood sculptor Jems Koko Bi, a regular guest of the Dakar Biennial, presents abstract and figurative pieces dealing with power tensions and the human capital flight, while photographer Franck Fanny negotiates the gaze and looks to capture the rawness and realism of the present. 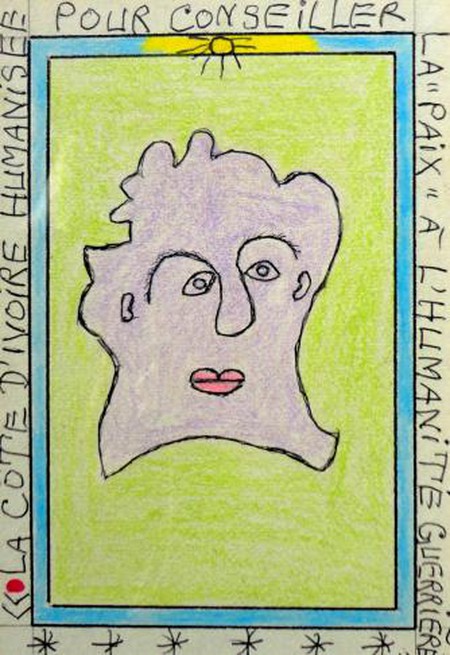 Born in Zéprégühé in 1923, Bouabré created much of his early ouvre within spaces of time unconventional to that of a typical practicing artist. His small drawings, many produced during a spate of clerking jobs in various government offices, became part of an overarching cycle entitled World Knowledge. In 1948 he had claimed to have received a vision that would shape his style and become a subsequent fixation for much of this work, alongside the folklore of his indigenous people. Bouabré’s impetus on his roots within his work was further instilled by the creation of a 448-character Bété alphabet transcribing the phonetic and oral tradition of his people. He has exhibited in leading museums and galleries all over the world including the Guggenheim, Bilbao, Mori Art Museum, Tokyo, Centre Georges Pompidou, Paris, and Hayward Gallery, London. In 2007, a retrospective of his work was held at the Ikon Gallery in Birmingham to great critical acclaim. He currently lives and works in Abidjan. 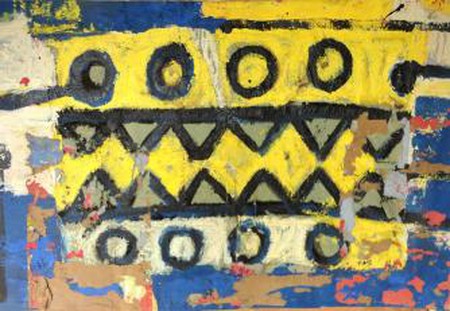 Another Abidjan resident, Dia was born in Bamako, Mali in 1950. His work as a painter derives from the notion of memory or that of a lasting legacy of an event. Often political, he has depicted the human and environmental catastrophes of the Ivory Coast’s recent past, such as that of the 2006 Probo Koala disaster, where 581 tonnes of toxic waste was offloaded into Abidjan’s port. His work is often described as a call for conscience.

Currently living and working in Essen, Germany, Bi was born in Sinfra in 1966 and pursued sculpture as an artistic medium, having previously studied Spanish History in Abidjan. Working predominantly with wood, on occasion alongside performance elements within his work, he relocated to Germany after winning the DAAD scholarship in 1997, where he studied with Klaus Rinke at the Kunstakademie Düsseldorf. 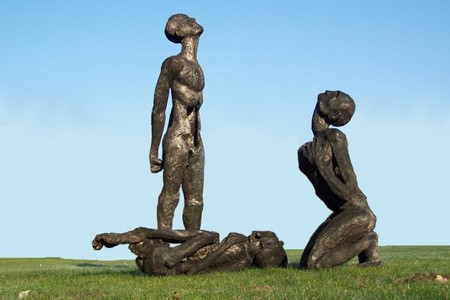 Remaining a resident of his birthplace Abidjan, Fanny’s approach to photography was inspired both upon a visit to Jamaica in 2001 and by the works of mid-century and contemporary masters of detached landscapes and observation. He has been heavily influenced by artists such as Naoya Hatakeyama, Stephen Shore and William Eggleston. He was born in 1970. 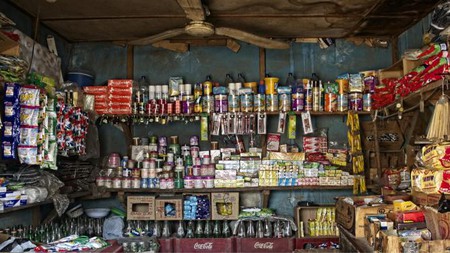