The Best Things to Do in Kimbe, Papua New Guinea 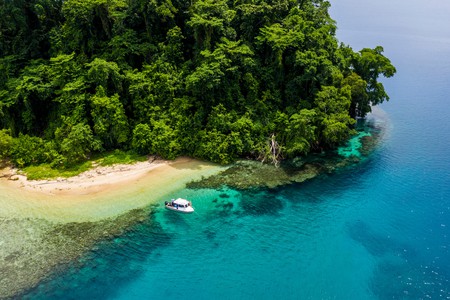 Kimbe Bay in Papua New Guinea has become a byword for spectacular scuba diving, and it’s true that this area has one of the most pristine marine ecosystems in the world. But there is much more to do here than just scuba diving. From volcanic springs to magical fireflies to fishing opportunities, here are some of the top attractions in Kimbe.

For a picture of what the underwater world looked like before people came along, Kimbe Bay in Papua New Guinea (PNG) is one of the best places in the world to visit. The tropical waters here are renowned worldwide for their incredible marine biodiversity and are home to more than 413 types of hard coral and 860 species of fish. Scuba divers can also explore beautifully preserved WWII wrecks. But there is so much more to do in the capital of West New Britain Province, on the largest of PNG’s 600-plus islands. Read on to discover the Kimbe highlights you shouldn’t miss.

Just a 40-minute boat ride from Kimbe town is the idyllic paradise of Restorf Island. The jungle-covered atoll is ringed by a white sandy beach and spectacular coral.

“This is a must-visit destination when in Kimbe as it boasts some of the most magnificent diving and snorkelling in the world,” says Tiana Reimann, the travel coordinator for Liamo Reef Resort and Baia Sportfishing PNG. “There is an incredible amount of marine life with easy snorkelling for all ages, and the island itself is also great to explore with a range of bird species, including imperial pigeons and sea eagles. The jungle is dense above, but below the canopies it is a great walk to see the flora and fauna of the small island.”

Take a trip to the Garu Hot River

The island of West New Britain has been formed over thousands of years of volcanic process.

“Today, active volcanoes are still steaming away and include Ulawun (highest volcano nationally), Langila, the Garbuna Group, the Sulu Range, and the volcanoes Tavurvur and Vulcan of the Rabaul Caldera,” says Reimann.

To learn more about the volcanic activity in the area, visitors can climb active volcanoes with local guides, or take a trip to the hot water of the Garu River. The water is heated by volcanic activity beneath the Earth’s surface, and a dip in these waters will leave hair and skin feeling silky smooth.

“The hot river is a worthwhile visit,” says Reimann. “The river, warmed by Mount Garbuna, is your own natural spa among the jungle. The water reaches up to 40C and is completely filled with minerals to enrich your body.”

Watch the cricket at the San Remo Club

On Wednesdays, the San Remo Club turns into a hive of activity when the weekly cricket match takes place. Local teams compete against each other for the crown, playing indoor cricket rules on the tennis court outside.

“The indoor cricket held at the San Remo Club has been going on for 12 years,” says Reimann. “Commonly held on a Wednesday night, the local community of expats and locals come together to play.

“If you are a visitor, it is a great way to mingle with the locals and watch some live sports.”

The rest of the week, the San Remo Club transforms into a relaxed bar. From the terrace, the active volcano Mount Garbuna can be seen sizzling away across the bay.

One of the many active volcanoes ringing Kimbe Bay, Mount Garbuna is a spectacular sight. Even from a distance, the yellow, sulphur-tipped peak of the volcano can be seen clearly through the green jungle, and when the wind is blowing in the wrong direction, the rotten egg-like odour it emits is hard to escape.

“It is a worthwhile walk with dense jungle, insects and birds that you will encounter.”

Solo travel is not permitted and would need to be organised through a local guide from the village, who owns the land. The Walindi Plantation Resort organises the trips, which set off at 7.30am in order to leave enough time to reach the summit and navigate the narrow dirt paths down again.

Because of PNG’s remoteness, many species have thrived in the country’s waters, including the Papuan black bass. Known as Lutjanus goldiei to scientists, these fish are rated the top freshwater fighting fish in the world – a battle with one of these will test even the most experienced angler.

“The legendary Papuan black bass is renowned for its fierce fighting abilities,” says Reimann. “As one of the strongest freshwater species, there is so much to this fish yet to be known, but for now, it is a major drawcard for PNG tourism. These fish can be found in a few other places around the world, but the populations in PNG are abundant.”

The magical experience of visiting the fireflies in Kimbe Bay is not to be missed. Trips are run at night when it is easiest to see the little bugs lighting the grove of trees. It’s described by many as akin to seeing the night sky, or trees lit up with festive decorations.

“The fireflies are only a short trek away from the Walindi Plantation Resort,” says Reimann, who runs YouTube channel T Adventures, which aims to promote PNG. “At around $15 per person, your guide will take you to the trees that the fireflies live off. You will be amazed at the tiny neon-green lights pulsating together on the trees like a Christmas tree.”

There is nowhere better to get a taste of local life than the market in Kimbe town.

“The market consists of fresh local produce, tropical fruits, baked items and local market food such as tapioca cake, cooked banana and sweet potatoes,” says Reimann. “There is also a range of crafts on offer from traditional PNG billum bags made by women, and handmade jewellery made from traditional shell money.

“This is a great place to find your souvenirs.”

Do not be surprised by the bright-red smiles of the local women. Their teeth are stained crimson from chewing the betel nut, which acts as a mild stimulant. It is best to visit the market accompanied by a local guide. This can be organised through hotels and guesthouses.

PNG was a hub during WWII, with the Japanese using Rabaul in New Britain as a major operations base, and the remnants of the battles fought with the allies can still be seen in Kimbe Bay. Two plane wrecks, a Mitchell B-25 Bomber and a Lockheed Vega Ventura, lie disintegrating in the jungle near Talasea. There is also a downed Japanese Mitsubishi Zero that has turned into a popular scuba diving site.

“The plane was accidentally discovered by William Nui while diving for sea cucumber,” says Reimann. “The plane was in such an excellent condition that the serial number was still visible.”

Records reveal pilot Tomiharu Honda and his plane went missing during the Battle of Cape Gloucester on 26 December 1944. “Today,” says Reimann, “it is a popular diving destination in Kimbe Bay and is situated on a sandy seabed two hours from Kimbe town.”

Run by PNG local Elvis and his wife Alice, Manaia Guesthouse is a tranquil oasis in the western end of Kimbe town. Originally a family home, the couple set it up as a seven-bedroom guesthouse after their four children grew up and moved out. But the family feeling is not long gone, and the corridors are brimming with displays of their children’s sports trophies. When not packed with guests, Alice and Elvis open their doors to local schoolchildren and hold leadership and team-building workshops. Set in beautiful gardens planted by Alice, Manaia is also one of the best places in town to try a home-cooked PNG meal. Elvis drives guests to the local market and can provide transfers to the airport. Alternatively, book through Guard Dog Security, whose main office is right next to Manaia.