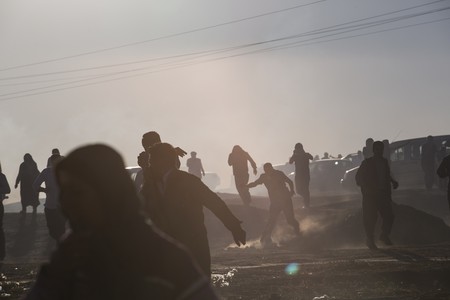 With their country in the midst of a general strike, students protest to demand to take their exams in this story by Hakim Bah from the Guinean selection of our Global Anthology.

After beating me up. Beating me up good. Beastly. So beastly. With a truncheon. They dumped me in prison.

We were a fine skewer of high school students piled up in the same small cell.

“The baccalaureate will begin very early tomorrow morning,” he had said. He’d repeated it. Several times. The minister. Sure in his voice. The day before. On TV. As for the unionists’ strike paralyzing the country, the minister in his four-pocket suit couldn’t care less.

And yet, for the last five days, the whole country was smothered by a general strike hitting all areas of activity.

The streets, deserted alleys, or near-deserted.

The squeals of tires and endless honking of cars, motorcycles suddenly stopped. One could feel a certain tension vibrating in the air.

We could no longer contain ourselves.

We were a fine skewer of young high school students invading the streets. Shouting. Singing. Whistling. Shaking. Burning tires on the tarmac. Clapping our hands.

The dust pissed on us. We didn’t give a damn.

Towards the governorate, where administrative authorities were camouflaged, or just about, to seek answers. Get answers from them. We wanted explanations even if we knew in advance that no explanation could calm our fury.

The governorate’s small courtyard was full to bursting. We were hundreds, perhaps even more, in the courtyard. Each wearing their blue-white uniform.

Standing. All standing. Our gazes constantly fixed on the governor who had decided to speak on behalf of all the city’s administrative authorities. He was in his sixties. The white boubou he wore displayed well his fat belly. His black skin was consumed by age. His head covered by a white cap. His eyes puffed out by his big, clear glasses.

For a long while he soliloquized, the governor. But never got to calm our fury.

“The baccalaureate or death,” he was interrupted.

More and more we screamed, shouted, insulted, insulted him, teased, we were fed up. We couldn’t control ourselves. Tension maxed out. Nothing could stop us anymore.

This story was translated courtesy of Hakim Bah’s publisher Éditions Ganndal, based in Conakry.