Guinea-Bissau’s Waldir Araújo is a prolific writer whose talent took him to Portugal, where his writing career blossomed for several decades. But despite his bond to Portugal, and Lisbon in particular, Araújo’s narratives—poetry and short stories alike—are led by a Guinea-Bissauan voice, and tell tales of the troubled land’s history, social struggle and political identity. Paul Southern, Waldir Araújo’s translator, reveals the themes and concerns that navigate through the writer’s body of work, including short story “No Reasons for Bitterness”, the Guinea-Bissau selection from our Global Anthology. 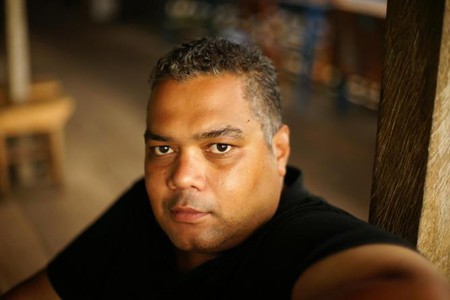 Born in Guinea-Bissau in 1971, Waldir Araújo was awarded a scholarship to Portugal after winning a literary competition organised by the Portuguese Cultural Centre in Bissau City. He was 14. Following his success, he completed his secondary and university studies in Lisbon. In 1996 he became a journalist, then a member of the editorial staff of the cultural magazine Valor. In 2001, he joined the staff of RTP África (Portuguese Radio and Television Service). Three years later, he was awarded a Literary Creation Scholarship by the Portuguese National Centre for Culture, enabling him to study the Rabelados community on Santiago Island, Cape Verde. In addition to many recognitions and publications that followed suit, his most recent work, published in collaboration with the Mozambican poet Mia Couto, the Angolan writer “Ondjaki”, Ndalu de Almeida, and the Brazilian poet Paula Maia, was recently published in Portugal. 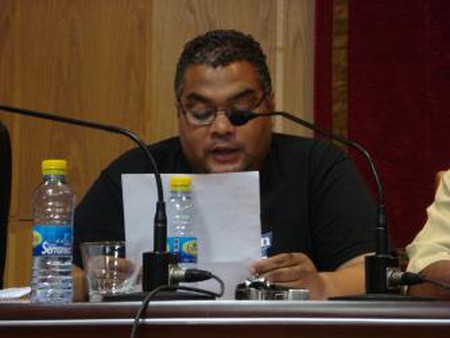 Waldir Araújo’s short stories transport the reader to scenes of everyday life in Guinea-Bissau, seen through the eyes of the narrator. The narratives are strongly connected geographically and psychologically to Guinea-Bissau, where Waldir invites the reader to visit his world, his very own version of the country. These short stories give a novel insight into the lives of the diverse peoples who constitute modern-day Guinea-Bissau, and serve to further interest in this often ignored, economically disadvantaged West African country.

In these stories—many of them interlaced with Creole, often dealing with the struggle to survive and prosper in a changing post-independence world—the reader meets fascinating Guinea-Bissauan characters. Not a small number of them are powerful women.

In “Admirable Rough Diamond (Admirável Diamante Bruto)”, a humorously ironic and entertaining story dealing with perceptions of reality, we meet an incorrigible confidence trickster and ex-junior Benfica footballer. Prior to leaving Guinea-Bissau, the handsome young man had re-invented himself as “Admirable Rough Diamond”, perhaps in an effort to hide his lowly origins. We follow him as he effortlessly navigates and “cons” his way through the smart lobbies of Lisbon’s international hotels. The footballer failed to make the grade with Benfica and fell on hard times but was supported by his cousin, the hard-working building sub-contractor Ansumane Sidibé. “Admirable”, on arriving in Lisbon, had initially ignored his cousin, but knew that Ansumane would never turn his back on him; it would be “against the principles of solidarity that characterise African families”. Thanks to his cousin, “Admirable” is provided with a sinecure: the ex-footballer views it as a means of having the wherewithal to lead his “other life”. Every evening he strolls into Lisbon’s best hotels and seats himself comfortably on a sofa to casually leaf through a number of prestigious foreign dailies. He is not disturbed by the hotel staff as they believe he is an “important personage”. “Admirable” has almost convinced himself that he really could be an executive, a political bigwig, African ambassador or even a diamond merchant. He gets to rub shoulders with Pedro V, the pretender to the Portuguese throne, Eusébio, the legendary Maputo-born footballer, sees Elton John and speaks to a much-admired Brazilian actress. One evening, dressed for “another world”, he meets by pure chance (or could it be by pure connivance?) the influential French businesswoman Monique Arnaud. A lucky, comic misunderstanding leads her to employ the handsome Guinean as her “escort”, followed, eventually, by a glitzy wedding in Paris. But even now, when in Lisbon, “Admirable” still gets a thrill out of visiting his former, trendy haunts. 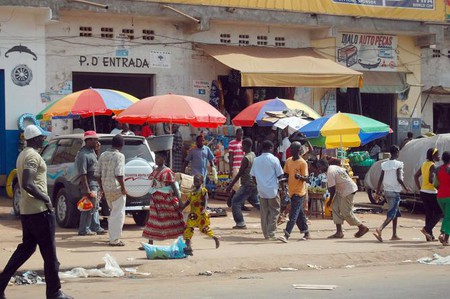 In another short story, “The Day of Self-Belief”, we are transported to the mythical, mystical island of Etiokó in the Bijagós Archipelago where we find its queen, the formidable Domingas Odianga—the island has been ruled from time immemorial by a succession of powerful, sexually voracious female monarchs. The story opens with Domingas’s rejected lover, Ernesto Nanqui, driven to attempt a particularly gruesome and personal act of self-mutilation. The hitherto powerful fisherman becomes an outcast, shunned by fellow fishermen and Etiokó’s womenfolk. Domingas Odianga “insisted on punishment for the mate she saw as a traitor”. However, Ernesto’s miserable existence is alleviated through his relationship with Nené Sankó, a young, childless and lovelorn woman who nevertheless fights his corner and welcomes him into her home. Thanks to Nené’s insistence and the intervention of an aged, blind soothsayer, Nácia Kabunqueré, Ernesto (now much sought-after by Domingas Odianga and other women on the island) recovers both pride and potency.

In “No Reasons for Bitterness”, the scene is the Glowworm Bar in Guinea-Bissau’s capital city where, amid constant power cuts, the headlights of enormous, sinister 4x4s provide the only illumination. On the wall of a colonial-era building destroyed by war is daubed, in Creole, panha raiba ka tem: “no reason for bitterness”. At a candle-illuminated table sits Dino Isaacs, “the most Guinean Jew I’ve ever met”, narrates the world-weary Gabriel Mendes. Gabriel’s character may be a nod to the author Waldir Araújo himself. Gabriel is attempting, with the aid of foreign cultural organisations, to produce a positive post-electoral documentary on the “realities of the new Guinea-Bissau”. The question posed is whether his politically correct European backers will chance their Euro dollars on the odd pair Gabriel and Dino or opt for a tacky tourist film instead.

In “Saved by Death” we meet the much-feared and admired former liberation fighter Carlos Nhambréne, the king-pin of Bafatá region, known by the nickname “iron hand”. Carlos had been badly injured by a Portuguese anti-personnel mine in 1969 while at the wheel of a military truck. While on a crowded toca-toca bus ride back to his hometown from Bissau City, where he had completed a livestock sale, he reads his own obituary in the newspaper. In a clear insight into human nature, the author tells us that Carlos took a certain satisfaction in reading the obituaries of others. That feeling is soured by anger as he attempts to fathom such an act. He was, in his own estimation, “one of the most feared men in the region”. The narrator tells us that Nhambréne’s war injuries “saved his life”, as the People’s Party declared him a “Fighter for the Nation’s Freedom” and awarded him a lucrative, lifelong pension which set him up in business in Bafatá. While formulating revenge he attempts to fathom his enemy’s identity. The list is huge but one by one he discounts characters like the new, young, regional governor who is striving to bring fresh ideas, energy and development to the region. The narrator provides an insight into Guinea-Bissau life and politics as the young governor struggles against entrenched views and self-serving attitudes. Nhambréne’s personal life is clothed in secrecy—he is captivated by only one woman, a beautiful, intelligent and powerful businesswoman from the Mandinga clan, yet she shuns him after one night together. Religion now enters the narration; Samba Dabó is a boyhood friend now hated for having become successful; a Muslim businessman, he is beyond reproach and respected in the region. The protagonist unsuccessfully tries to elicit the help of an Islamic religious community leader and soothsayer in an attempt to frustrate Dabó’s business plans. Carlos Nhambréne’s cathartic, Scrooge-like experience leads him to reappraise the less noble side of his character. 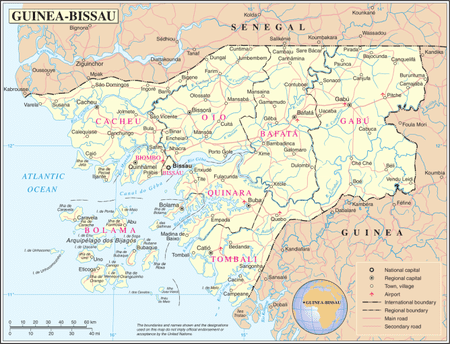 “Second Time Round” opens in 1998 with a scene in which the young narrator describes his hometown as “the violated city, opaque and full of pain”. The narrator returning to Bissau City is terrified by the scenes of violence and death and by a thunderous, bellicose voice from the regime’s radio station. The narrator describes his fear and anguish on confronting the realities of his country’s vicious civil war. In a moment of sheer panic he attempts to seek security in the recollection of childhood games and songs. Then he remembers his friend Saliu. The character of Saliu is a metaphor for his country—a man blinded in the “real war”. That is, in the 13-year-long war against the Portuguese ending with Guinea-Bissau’s independence in 1974. Brave, proud Saliu is now reduced to begging in the streets. While searching for Saliu, the narrator asks himself: “How could a blind man escape from this chaos…?” But then, amazingly, he catches sight of Saliu frantically marshalling a group of panic stricken townspeople: “A blind man was commanding a mob fleeing from a senseless war.” Later Saliu and the narrator arrange to meet but the war and chaos take their toll and the narrator reluctantly makes for the harbour where he joins “people boarding an overloaded fishing boat”. These fearful people are intent on making an “escape towards uncertainty”. As the boat pulls away from the harbour the narrator sees Saliu armed to the teeth and almost surrounded by hostile government soldiers. The old liberation fighter calls out: “Nobody’s going to hurt me anymore. The first time they took away my sight, this time…”

In the powerfully dramatic poem “Murmurs”, Waldir Araújo writes of his feelings surrounding the infamous Pidjiguiti Massacre, which took place among the mildewed docks and warehouses in Bissau, the capital of colonial Portuguese Guinea. On August 3, 1959, paramilitary police confronted striking Guinean dockworkers protesting against chronically low wages; the protesters were armed only with oars and sticks. “Murmurs” is a deeply mystical, poetic homage to the many victims of Pidjiguiti whose actions, Araújo believes, initiated the long struggle against colonial Portugal.

In Africa he exorcises, through the medium of his verse, a poetic lamentation on the pain of a continent which, he believes, others would condemn to a state of everlasting poverty.

But none can justify

All this misery, pain and folly.

It is a fate he contrasts with its immense human and natural wealth, while at the same time alluding to the impact of centuries-long exploitation.

Many are the riches you conceal

Deep within your mysterious soul

Greed of Kings, Nobles and Counts.

The poem concludes in a deeply pessimistic tone:

families from your African home

In search of a strange safe haven.

In “Dawning”, the poet relates that his birth and early years were lived in the final, chaotic days of colonialism: “I blossomed on the eve of the canticle of freedom.” He writes of growing up “enmeshed in the echoes of an epic”, referring to the epic liberation struggle initiated by Amílcar Cabral. The poet speaks of being freed from that “epic” and of witnessing the end of colonialism in his country; hence, “I chanted the canticles in praise of the death of the centipede.” The “centipede” in a figurative sense is representative of colonial Portugal, which then also held sway over Angola and Mozambique. The poet writes movingly of his feelings of post-colonial disillusionment after the euphoria of liberation, and of the way that its leaders took the country toward a web of corruption and a cycle of constant instability. Yet, in spite of his disillusionment, he feels that his country may yet be “on the threshold of a dream”.