Exploring the Bijagos Islands of Guinea-Bissau 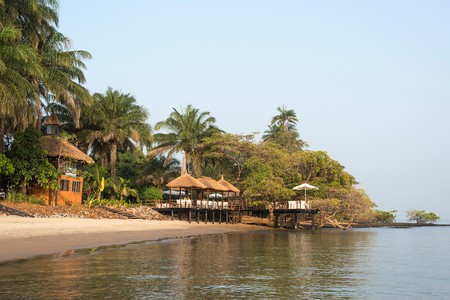 Guinea-Bissau’s Bijagos Islands make up Africa’s most numerous yet least well-known coastal archipelago. With untouched beaches, tropical forests, turquoise waters, saltwater hippos, pygmy cows and traditional beliefs, the Bjiagos is a unique paradise that is very much off the radar. Located 48km (30mi) off the Guinea-Bissau coast, the 12,950-sq-km (5,000-sq-mi) Bijagos (often spelled Bissagos) archipelago encompasses 88 islands and islets. Less than a quarter are inhabited year-round, with some islands, like João Vieira, welcoming seasonal inhabitants to cultivate rice and palm oil, while others, such as Poilão, are deemed sacred, with staying overnight strictly forbidden. 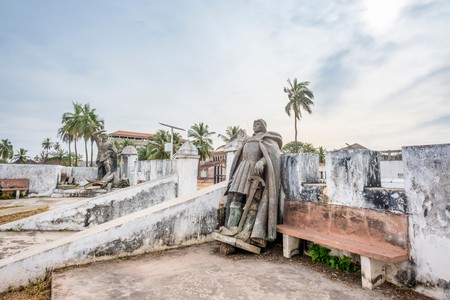 Such careful oversight has preserved the islands’ distinct flora and fauna, while local traditions and beliefs have also evaded corrosion. The Portuguese established a fort at Bissau on the mainland in the 17th century, but thanks to the islands’ distance and resistance, the Bijagos were not annexed into Portuguese Guinea until 1936. With only a sole generation of loose colonial rule, the current 35,000-strong Bijagos population have maintained a strong sense of traditional identity, culture and centuries-old idiosyncrasies.

Relatively untouched by colonial rule, the islanders’ animistic faiths, spiritual beliefs and cultural traditions and are still very much ingrained in the Bijagos way of life. Around 100 days of the year are allocated to traditional ceremonies and rites, such as the fanados. Changing from island to island, these coming-of-age initiations traditionally involve young men and women spending up to four months in the forest with village elders learning the secrets of the islands and the spirits that govern them. By sanctifying the natural environment, the islanders help protect the Bijagos’ unique biodiversity, but according to the Guardian, these traditional beliefs are under threat from Christian missionaries who court the islands’ youth and have been known to cut down sacred Kapok trees as a show of ‘God’s strength’. 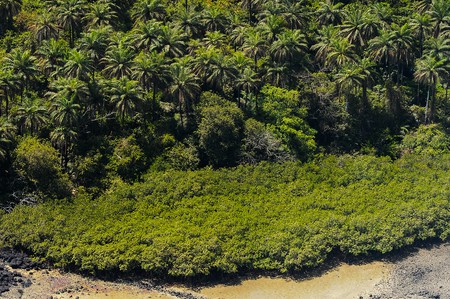 A number of the inhabited islands have matrilineal societies, where women traditionally wield power, manage the household and instigate marriage proceedings. The island of Orango, for example, is governed by female priestesses known as baloberas who carry out religious and administrative functions, while using their spiritual power to oversee ceremonies and protect the islands. When it comes to marriage, women offer a fish platter (traditionally in red palm oil) to their chosen husband-to-be, who accepts by eating it. However, like with the islands’ spiritual beliefs, the gradual increase of outside influences, including an upturn in locals visiting the mainland, has diluted these traditions. 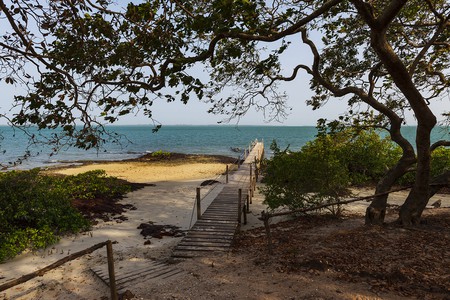 Since 1996, the archipelago has been designated a UNESCO Biosphere Reserve. From its coastal savannah, thick palm groves and untouched beaches to its maze of mudflats, sprawling mangrove forests and rich waters, the unique ecological situation and remote location has enabled biodiversity to explode. The treetops provide accommodation for local and migratory birds, including lapwings, terns, hornbills and fish eagles. Monkeys, wild pigs and pygmy cows the size of dogs roam the islands’ floors. Its waters are home to manatees, rays, dolphins, sharks, giant turtles and even rare saltwater hippos. Then there’s the fish… 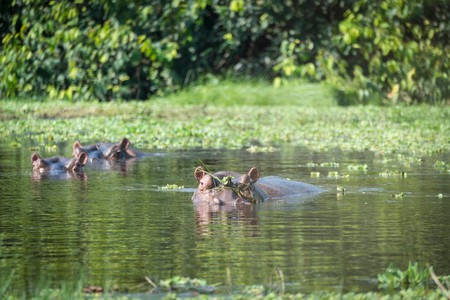 The Anôr Lagoon on the island of Orango is home to the largest community of rare saltwater hippos in West Africa | © dianajarvisphotography.co.uk / Alamy Stock Photo

With such bountiful waters, it’s no surprise that fishing is at the heart of Bijagos culture and economy. Shark jaw bones dangle in local bars, stingray masks are used in fanados and shellfish, oysters and crustaceans sit on local plates, but the islands are especially known for the abundance and size of the fish. Tarpons – also known as the Silver King – are the royalty of these waters. Growing up to 140kg (309lb) and over 2m (6.6ft) long, these legendary fish prey on schools of fish in the warm waters and can be caught from October to May. A vast array of jacks circle the islands – the crevalle jack is the main sport fish of the archipelago – while red snapper, barracuda, trevally and queenfish can also grow to monstrous sizes in the remote waters.

With 11,000 permanent inhabitants, Bubaque is the most populous island in the Bijagos as well as the archipelago’s administrative capital. With mainland boats stopping at its port, Bubaque life revolves around its crumbling harbour, and the street leading to the port is the busiest on the whole island: hardware stores with knives dangling on strings outside and painted boutiques advertising wine and soft drinks, shack cafés, shack bars and even a local nightclub. 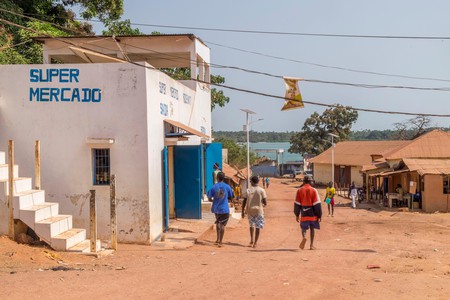 Bubaque, located in the National Park of Orango, is the most populous island in the Bijagos as well as the archipelago’s administrative capital | © Hemis / Alamy Stock Photo

The town then spreads out into quiet dirt roads where local homes sit side by side with old colonial ruins, including the former homes of the Bubaque administrator and the presidential retreat of Luís Cabral. Pigs, goats and pygmy cows toddle from the palm fronds to the bays, where local men build pirogues and kids play under cashew trees. Meanwhile, the hill on the northern edge of the town offers exquisite views across the aquamarine strait to the island of Rubane, and many of the western fishing lodges have dropped anchor here accordingly.

On the far side of the island, 18km (11.2 mi) from the harbour, Bruce Beach offers pristine white sand and cool, clean waters with minimal human interaction. The journey bounds down the island’s one ‘road’ (expect a bumpy ride), dissecting the forest and providing snapshots of Bubaque village life before opening up to a remote beach with a tiny handful of unloved beach camps.

Orango is the largest island in the Bijagos in terms of surface area (272 sq km / 105 sq mi), but its population of 2,500 occupies just 10% of it. Its most famous residents, though, spend their time away from the northern tabancas (neighbourhoods), preferring to frolic in the Anôr Lagoon. Home to the largest community of saltwater hippos in West Africa, these rare and sacred beasts take advantage of the lagoon’s salinity to both drink fresh water and bathe in the salty seas. 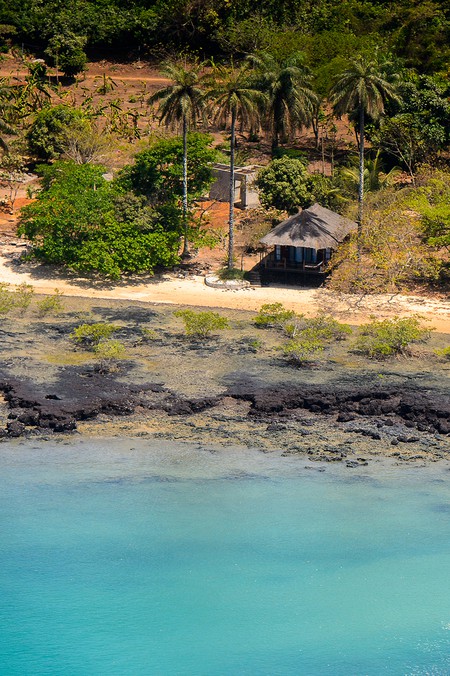 Among the beautiful scenery, the Bijagos population has maintained a strong sense of identity | © Siempreverde22 / Getty Images

Orango is also known for being the seat of the last Bijagos Queen-Priestess: Okinka Pampa. Ruling from 1910 to her death in 1930, Pampa is revered across the islands for resisting Portuguese rule and then negotiating a favourable peace treaty that ensured semi-autonomy and safeguarded the islands’ traditions and ecological secrets. Her mausoleum can be visited in the tabanca of Eticoga.

Ensconced in the João Vieira e Poilão Marine National Park, two of the archipelago’s southernmost islands are two of the most special. The island’s interiors are believed to be inhabited by spirits and are a no-go area for all bar village elders and those undertaking fanados, but the beaches have a more distinctive visitor. From the end of summer to mid-winter, thousands of sea turtles, including the critically endangered hawksbill, come to lay their eggs on the undisturbed beaches, and the islands remain one of Africa’s most important turtle nesting sites. 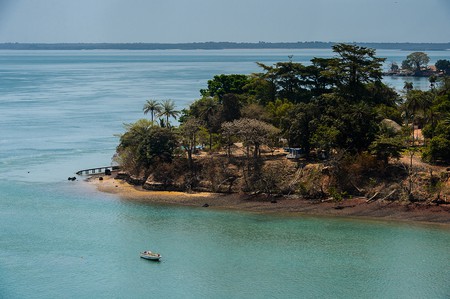 The best time to visit is during the dry season between November and April, with December and January the most cool. There are four main options to getting there independently (fishing lodges and hotels may organise this for you), ranging from the slick and speedy to the raucous and rickety.

Bubaque hosts an airstrip that would not be out of place in Narcos or a James Bond film. It’s a dirt-track runway in the midst of a cleared forest. Four-person Cessnas travel from the mainland or the Senegalese resort of Cap-Skirring for a relatively modest 70,000 CFA (£97) per person.

Complete with shade, comfy chairs and modern tech, the tourist ferry supposedly runs Fridays and comes back Sundays for 15,000 CFA per trip (£20.80). Taking around four to five hours, it slowly snakes through the islands to Bubaque, but there is no guarantee it will actually be in service.

A rusting hulk crammed with people, provisions, motorbikes and furniture, the local ferry takes all sorts over a six-hour trip. The atmosphere is hectic in port, but as the boat chugs off there is an instant changing of mood as the anticipation, the holding of spots, the bored tedium of standstill is dissipated and an air of chatty reverence, excitement and homecoming fills the boat. You can buy cold beers and chicken liver sandwiches on board, and the view through the islands is majestic, but just don’t expect to be comfortable for six hours.