Traditional Ashanti Wedding Fashion You Will Fall in Love With 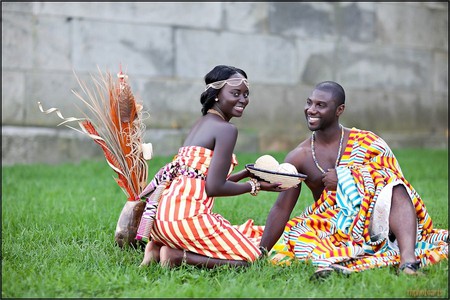 Black Panther is still on our minds and timelines, but guess what? There were distinct fashion references, especially kente fabric from Ashanti culture. The 2018 American superhero film really put wide smiles in our hearts – no surprise, then, that contemporary weddings keep embracing Ashanti fashion styles.

When it comes to kente, the loom is made in such a way that different coloured threads laced through it can be woven in layers and patterns similar to how a spider makes its web. Four-inch (10-cm) strips are bound together into larger pieces of brilliantly intricate designs which the Ashanti and Ewes of Ghana have associated with royalty over the years. Traditionally, stories, proverbs and philosophies are attached to magnify what the designs can embody over generations – kente’s significant socio-economic and prominent cultural role has spread far and wide. Adinkra symbols can also be seen stenciled on, to add depth and context. 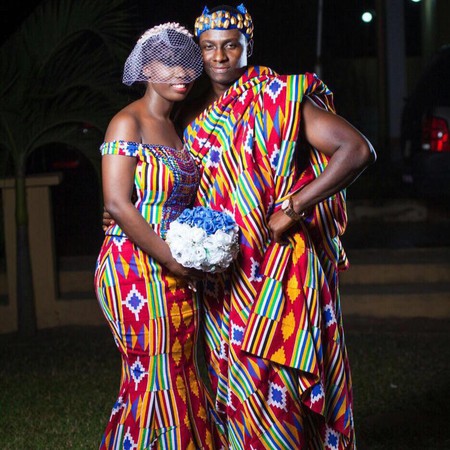 The colours of kente carry significance: blue denotes harmony, balance and space; green means growth and rebirth; yellow/gold means financial, spiritual or intellectual wealth and royalty; grey means healing and cleansing, black means spiritual elevation and maturation; pink is essence of life; white is plain; red stands for political stance or mood of the people; brown is earthly, and silver stands for serenity. Shapes in the form of square, triangle, diamond, circle and cross in kente depict cosmos and procreation, span of life, duality, eternity and the cardinal points respectively. 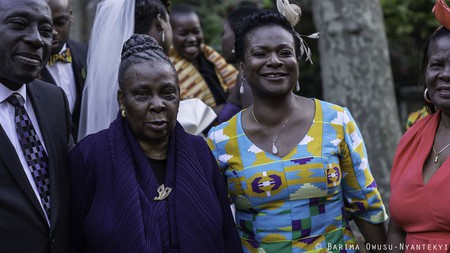 Weddings are a time for family celebration | © Barima Owusu-Nyantakyi / Flickr

When the late musical legend Michael Jackson was enthroned as prince of Krindjabo in Côte d’Ivoire, he was clothed in kente and Ashanti jewelry as a symbol of pride, acceptance, royalty and esteem. For couples coming together formally, the use of traditional Ashanti fashion is the emblematic ingredient. In Ghana, some couples choose to have the marriage ceremony at their homes or small venues in the community, beaches or parks, where families and friends attend. This has been the core practice before the introduction of western marriage forms by religious missionary bodies. Nowadays, couples either have just a traditional marriage, or they have a western weddings in church as well. 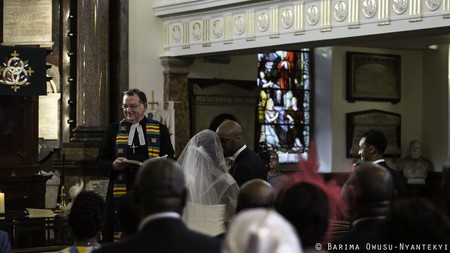 The culture of weddings has many implications. Knocking or ‘kokooko‘ is the first step in the marriage process, and is a symbol of respect in the direction of unifying two families. The groom will be accompanied by his family to formally ask the bride’s family for the bride’s hand in marriage. Prior to the wedding ceremony, the groom sends gifts to the bride which might include clothing, jewelry, a mat, a stool, etc. Then there’s the pouring of libation to consecrate the union. A vital aspect is the use of fashion, which is a shared tradition that weaves together both families. 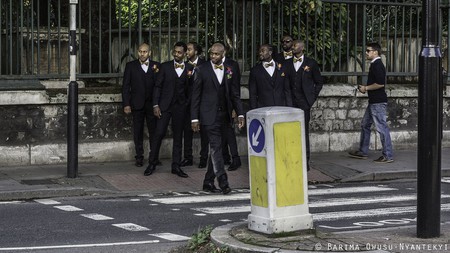 Kente pattern as a wedding theme

Weddings in contemporary society come with themes to capture the elegance and inspire uniqueness. Spaces like parks, woodlands, beaches or lawns are great for open air traditional weddings, where the theme can be based on colour or type of Ashanti textile used. Aside from the bride and groom’s dresses as well as that of their parties, the kente theme can also incorporate invitation cards, orders of service, flowers, table decorations, cakes, chair covers and ribbons.

If you’re afraid of being married (‘gametophobia’, FYI), you might be pulled in by the warm embrace of community rising up to the occasion with the most colourful trends – photographs from traditional Ashanti weddings have gone viral on the internet in a matter of seconds. If you’re someone who would rather invest in a not-too-extravagant-but-still-beautiful gathering rather than blowing your hard-earned cash on an over-priced celebrity-style wedding day, you may well be won over.

Whether wax print or kente, the vibrant patterns and colours show how each line and shape is a moment of captured magic for your marriage celebration, amidst laughter and love. Men wrap kente, thrown neatly over their shoulders and around their chests to feet, while women focus on marking out their curves and femininity to show true West African pride. 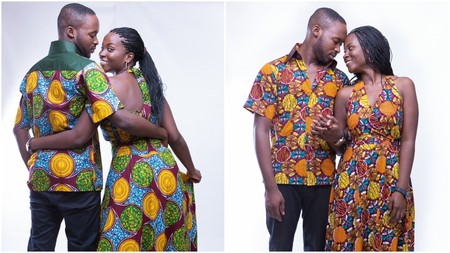 Wax wonders | Courtesy of Zedi Clothing
Give us feedback