Things You Didn't Know About Jamestown 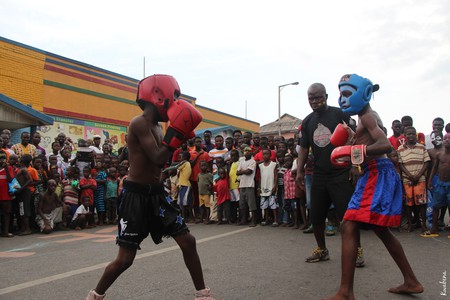 You might have heard about or even been to Jamestown‘s forts, lighthouse, fishing boat shore and biggest annual street art event, Chale Wote – but there are still more compelling things to see and do in the oldest district in Accra. Here’s everything you didn’t know about this Ghanian hotspot.

Whether you start off from the western part demarcated by Korle Lagoon, or from the eastern point where Accra Arts Centre sits facing Bank of Ghana next to Makola market, you’ll come across many captivating scenes and activities that make up day-to-day life in this enterprising community.

The labyrinthine streets are there for a reason

In the 17th century, the British erected formal structures to affirm their trade and stabilize their power – the James and Ussher forts still stand separated from the Gulf of Guinea and the Atlantic Ocean by shack settlements. Today the forts still stand in the township that was once the eye of Accra, their peeling paint only whitewashed once in a while. Jamestown’s town planning also points to its historic past – it was intentionally built in a labyrinth-like layout in the colonial era to make marauding slave traders lose their bearings during unsolicited captures. 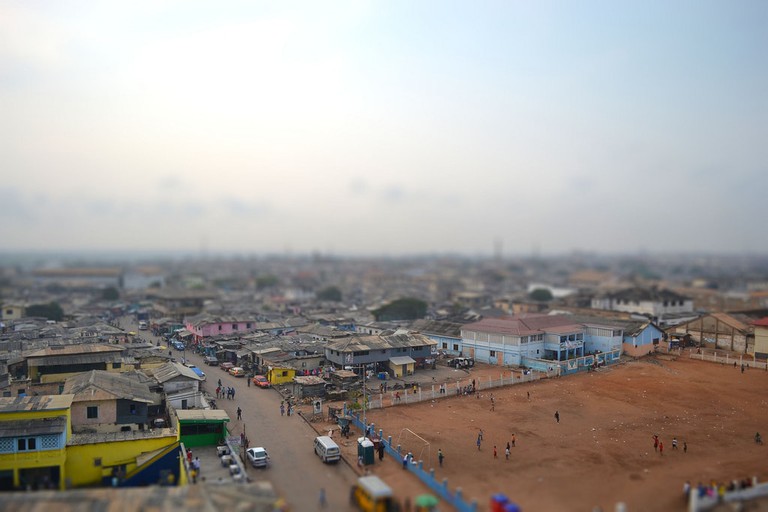 It’s a leading light for design and sustainability

A short walk to the east of Mantse Agbona brings you to the Solarkiosk, a start-up for home and office solar power installations. The organization, which officially launched with a cluster of five units in 2014 at Berekuso, now has hundreds of clients.

There have always been competitive inter-community fights between the fishing settlements in Jamestown. These fights create an avenue for amusement and sportsmanship. With time Jamestown has birthed international greats coming out of Ghana, like Azumah Nelson and Ike Quartey. Hand-painted match posters and training studio doorways in Bukom point to boxing rings, where you can find the future of the game sweating it out with their small hands fisted inside brightly coloured gloves, and faces lit with dreams a punch away.

Fishing is a life source

The lighthouse built in the 1930s still offers an incredible panoramic view of the surrounding area. Take a walk down the slope at its foot to the Nshorna, where the lines of canoes give way to fish cleaning and smoking spots. Ga people have old-fashioned methods of curing, smoking and flavouring fish in smokehouses that make delicacies out of a common catch. This reduces waste at times of bumper catches and avails protein nationwide. 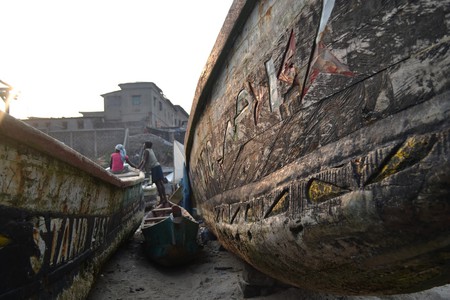 Twins Yam festival also called Akweley Suma, is a prelude to the annual traditional Homowo celebration in Greater Accra. As part of the quintessential spiritual, philosophical and symbolic significance, there’s a processions by twins followed by members of the community. This also marks the Ga new year which takes off in August. Twins are adorned in brightly coloured matching cloths or white fabrics with necklaces made from leaves or vegetables and pans with traditional potions on top of their heads. Portland-based One Nii Ardey Allotey organized the diaspora edition last year with support from an online fundraiser, and had a successful event featuring drumming, dancing and merrymaking.

Street biking is a weekly occurence

If you’re up for a spectacle of motorbikes doing wheelies, burnouts, acrobatic spins and stoppies, then Jamestown on Sundays is the place to be, when a few hours before sunset, the Accra Street Bike Weekender happens. One of the extreme sports geniuses to look out for is Martin Abrokwah, the head of The Flat Land Boys biker crew and Circus Ghana. Street sound systems are positioned at various spots as the audience naturally forms on the sidewalks. The riding energy is infectious.