These Waterbikes Are Keeping Education Afloat in Ghana 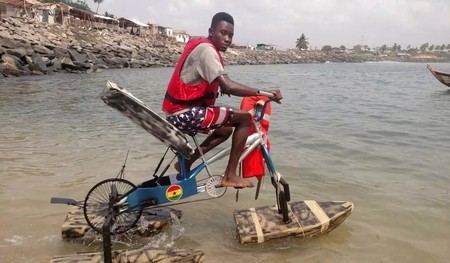 Bikes on roads are economical, environmentally friendly, and easier to repair and maintain than cars, but bikes that run on water are going to advance a whole other motive out here in Ghana.

Since August 2017, Ghanaian inventor Frank Darko had been working on water-bike prototypes and has already made successful test runs to make sure his floating vehicles can actually move on water. The Takoradi-based creative tested his handiwork in a shallow dam near his home, before going to sea with it. Friends and strangers were easily intrigued and keen to try out their first ride across the waves.

In the Volta, Ashanti, Western and Bring Ahafo regions, there are several communities where children have to cross water bodies to access education, due to the fact that their schools are kilometres away from their homes cut off by rivers, streams or lakes.

There was even the case where girls from the Upper Denkyira East district were reportedly banned from crossing the Ofin River while menstruating, as authorities in the district of Ghana believe that breaking this code could be an antecedent to a wrath from the river god. As a result the girls are said to miss 20 out of 60 days of their school classes. 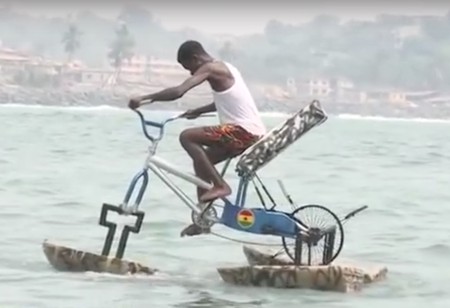 Frank Darko’s aim is to put a stop to the disincentive that obstructs school-going kids living in areas like his. The devastating effect of getting stranded and not being able to cross rivers, especially during flooding in his hometown, has triggered him to invent this solution for school children who cannot make it on the few canoes available to get to school.

The Takoradi Technical University graphic design student who had deferred his studies due to financial challenges and to focus on his inventions has been granted a full scholarship by the Vice Chancellor of Takoradi’s only technical university, Reverend Professor John Frank Eshun. The university head states that this move is to inspire entrepreneurial and innovative activity in the school and beyond. 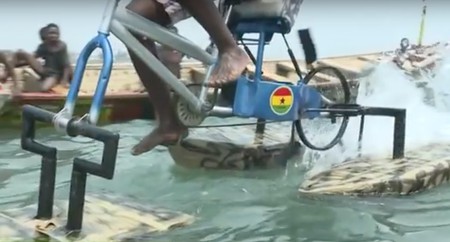