The Most Intriguing Fortune Telling Techniques in History 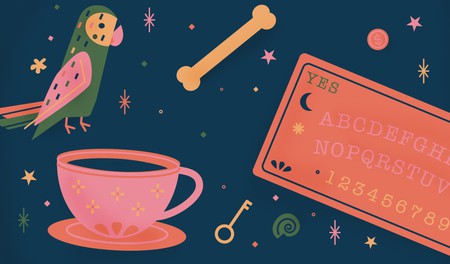 Fortune telling is as old as human thought and is used to predict harvests, chart a baby’s future, and divine the correct circumstances for battle. It has crossed all cultures at all times in many strange, wonderful, and curious ways, some far more charming than others.

This jaw-dropping technique involves the caul of a baby; a membrane that covers the head upon birth, a highly rare occurrence that only one in 80,000 babies are born with. In ancient times they believed that if a baby was born with a caul it could be read, and that interpreting the color of the caul meant to indicate a happy or tragic life. And incredibly in Poland, there was a belief that to see a caul upon birth meant that your child would one day become a vampire. As an antidote to this they would save the caul until the child’s seventh birthday before feeding it to them. If they were lucky it was ground up and obscured in a more tasty dish but some had to eat this seven-year dried caul as it was: a dried membrane. Victorian sailors carried these rare cauls out to sea, where they believed as a talisman, it could save them from drowning.

The study of tea leaves/coffee grounds is a highly interpretative form of fortune telling that owes much to the teller and an intuitive art that many say is passed down through generations. After a cup is poured without using a tea strainer, the liquid is drunk or poured away until very little remains, which then is dripped away into a saucer. What is left are patterns in the tea leaves stuck to the bottom of the cup, which are then studied and interpreted using standard symbolism.

Coffee readers traditionally use Turkish coffee, where the grounds are always heavily collected at the bottom of the cup. It’s a popular practice with a different final flourish to tea reading. At the end, the querent is asked to “open the heart” which means to use their thumb to make an impression on the coffee grounds by placing it at the bottom of the cup and twisting it clockwise. The reader then reads these disturbed grounds, which are meant to symbolize the querent’s inner thoughts and emotions.

The Chinese specialize in this form of divination in which the face is mapped and broken down as so: the forehead to the eyebrows are denoted as the heaven region, indicating life’s early years, the eyebrows to the base of the nose (the middle section) is called Human and associated with the middle years of life, and the bottom section from the base of the nose to the base of the chin relates to life’s later years and is known as Earth. Scars, any malformations, marks (even those caused temporarily by light), and discolorations are all read very carefully. The face is also divided from top to bottom into 13 different sections, with each one also carefully analyzed in more depth.

This is a colorful and idiosyncratic technique utilized in India and Singapore where trained green parakeets pick up tarot cards. Overseen by a roadside fortune teller, these parakeets are usually in the company of men who settle themselves by the side of the road with their bird caged under a tree. The fortune teller will spread out 27 tarot cards representing the Indian cosmic system before letting the parakeet out to pick one card and return it to him, after which he interprets the fortune of the patron based on this card.

Popular amongst African sages, gifted psychics throw stones, shells, or nuts in their natural state, a divination originating within the Yoruba tradition, which hails from modern Nigeria. This can involve Kola nuts, cowrie shells, or four pieces of coconuts used to answer yes or no questions by the chosen pieces being held in the diviner’s palm while asking the question, after which they are thrown down on a mat and the form they fall in is analyzed by the diviner. For example, in cowrie readings, shells can fall “mouth side up,” which is interpreted as “open” or “mouth side down,” which conversely is “closed.” Similar parameters are laid down for interpretation of coconut pieces and all other objects.

This is an ancient practice that is linked to and seen in many parts of the world, including Africa, Asia, and North America. Various bones are tossed onto a mat and an animal hide or a circle is drawn into dirt and then interpreted. Chicken bones are utilized frequently and other objects such as pebbles, coins, nuts, or shells can be mixed in with the bones for a fuller reading. Another form of bone reading involves cooked bones scraped clean of flesh after which the markings left behind on the bones are studied and interpreted

Also known as Chiromancy, the wisdom follows that you read the lines on a person’s dominant hand, which is supposed to signify what they have made of their life with what they were born with, which is separately indicated on the non-dominant hand. Common to Eurasia, it has been widely practiced in Tibet, India, China, Persia, as well as ancient Israel and Babylonia. The practice evaluates a person’s life and character by reading of various lines such as the heart line, life line, head line, and fate line which are interpreted by size, quality, and various intersections as well as taking into account any significant mounts or bumps. Other qualities of the hand, such as the shape and size of the palm and fingers are also interpreted, with the hand being put into one of four shape categories: earth, air, water, or fire, which correspond to different personality types.

Also known as a “spirit board” or “talking board,” the Ouija consists of a flat board on which letters of the alphabet are written, the numbers 0-9, and the words “yes” and “no.” It uses a small heart-shaped piece of wood, called a “planchette,” to attain answers. The living are supposed to be able to connect with the dead by asking them questions and being guided by the planchette, which the spirit moves in answer. This fortune telling technique that is featured heavily in popular culture is something of a parlour trick devoid of deep roots. It was invented by an American businessman in the early 1900s looking to cash in on the popularity of the Spiritualism movement. Nowadays this staple of kids parties and horror films is in fact owned by the children’s brand Hasbro. Regardless of this, some Christian denominations have denounced them as demonic and warned that use of a Ouija can lead to demonic possession.