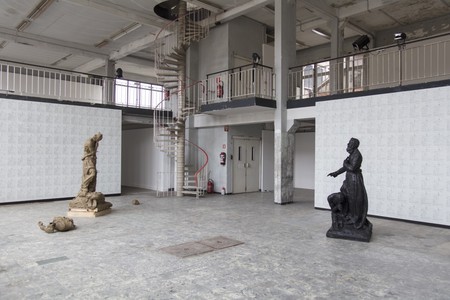 It is a sad truth that there are still racist, supremacist, and colonial monuments in some European cities, parts of North America and Australia. These types of monuments and memorials were installed and still stand in public view, awaiting momentous counter perspectives to state the obvious since, of course, visual culture shapes history.

These sculptures celebrate the events and people being represented, and it’s because of this fact that 31-year-old Ibrahim Mahama has remade a human-sized copy of an unsettling sculpture, as historian Omar Ba led a dialogue for a reactionary molding of a counter-monument defined by collective public narratives. The new sculpture goes without the three-meter-tall rubber plinth that the original one stands on. 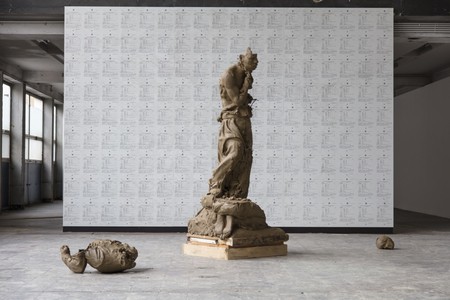 Ghanaian artist Ibrahim Mahama, is popular for colossal installations that cover art spaces, bridges and public markets to draw attention to the global exchange of goods across borders and the historical and sociopolitical clout of capital and labour. The artist’s work, On Monumental Silences engages the ignominious sculpture of Father Constant De Deken, carved in 1904 by Jean-Marie Hérain in Wilrijk. In 2015, there was a heated social media campaign to bring down the sculpture, but authorities mounted a paltry and easily-overlooked information panel beneath the statue instead.

On Monumental Silences (January 27–March 4), curated by Antonia Alampi at Antwerp’s Extra City Kunsthal, is not a new fight. Organizations such as Mémoire Coloniale in Brussels and Hand in Hand Against Racism in Antwerp have made several objections in the past. The exhibition marks the first part of a series in a three-year collaboration between Extra City Kuntshal and the Middelheim Museum. 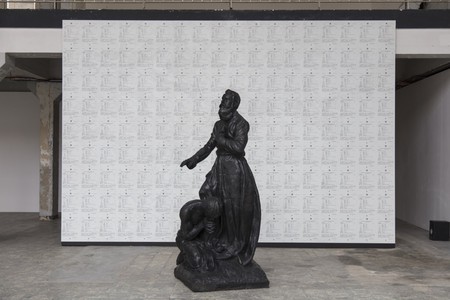 Art has been used as an outcry against placement of monuments, like in the case of Rhodes Must Fall where visual artist Sethembile Msezane raised wings to reimagine “new possibilities […] in the ruins of the old”.

Ibrahim Mahama lives and works in Tamale, and has shown work at Silence Between The Lines, Kumasi; the Gown Must Go to Town, Accra; the 56th Venice Biennale; documenta14, Athens and Kassel, among others.

In conversation with Artnet News, Mahama concluded, “I believe both works deal with the approach to representation and history as a material which is in constant change, which can also be reimagined within several forms or contexts.”