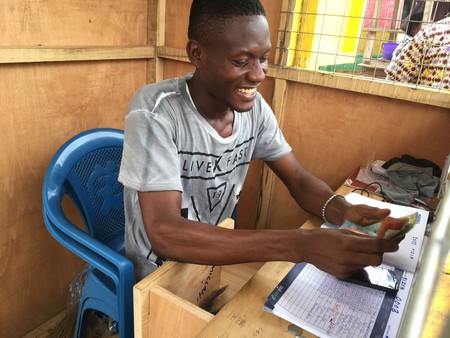 The Ghana cedi, introduced on July 3, 2007, corresponded to 10,000 old cedis and is the fourth historical tender in the West African country. It became one of the highest-valued currency units from sovereign countries in Africa when it was issued.

The spurious misconceptions and real facts about the current legal tender in the Republic of Ghana should be discussed more. The currency follows the metric system where one Ghana cedi translates to 100 Ghana pesewas. By setting 10,000 old Ghana cedis to one new Ghana cedi (currency sign: GH₵; currency code: GHS), the re-denomination process that aimed to address past incidents of high inflation and economic difficulties, in actual fact mainly went to reduce the risk of carrying sacks of bank notes for business in Ghana.

A brief history of the cedi

The word ‘cedi’ is from the Akan word ‘sidiɛ,’ meaning porcelain-like cowry shells, which were formerly used as currency in the Gold Coast. After it gained independence, Ghana discontinued the use of the British West African pound, which was the currency of some British colonies. The Ghanaian pound (1958–1965) was the new republic’s first post-independence medium of exchange. 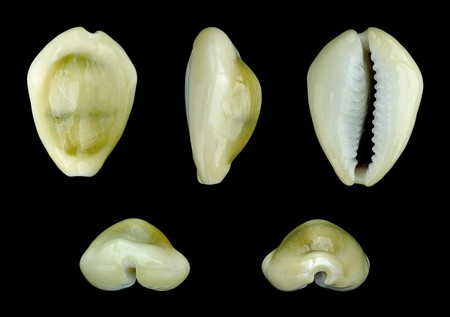 Cowry shells were once used as a form of currency in Ghana | © H. Zell / WikiCommons

In July 1965, Kwame Nkrumah—Ghana’s first President—introduced cedi notes and pesewa coins to outplace the Ghanaian pounds, shillings, and pence. After the February 1966 military coup, the anti-Nkrumah wave intoduced the new cedi, which circulated from 1967–2007. In 2007, under the leadership of former President Kufuor, it took six months for the new notes and coins (the Ghana cedi) to replace the existing ones.

The Ghana cedi coins mainly used for exchange include five pesewas, 10 pesewas, 20 pesewas, 50 pesewas, and 1 cedi. One pesewa coins are rarely used except in the big malls and banks. 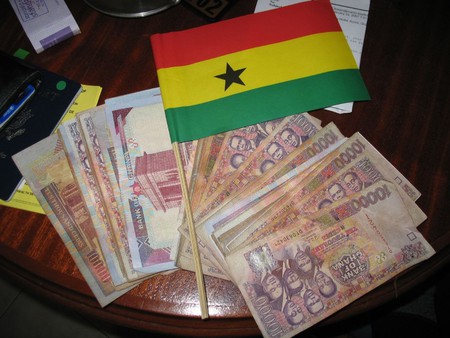 When the British colonial monetary system was dropped, it was in favour of the more widely-accepted decimal system. The first cedi, which bore the portrait of the Nkrumah, has been hit with inflation over the years such that from its equivalent to eight shillings and four pence, the second cedi was only worth a small fraction of its original value. Though four zeros were cut out for the switch to the third cedi, it has since lost about 75 per cent of its value.

In the second half of 2007, both the second and third cedi were in circulation until January 2008, when old banknotes could only be exchanged at banks. On May 14, 2010, a GH₵2 banknote was issued to meet public need for an intermediate denomination, with the commemorative text “Centenary of the Birth of Dr. Kwame Nkrumah.”

To celebrate 60 years of central banking, the Bank of Ghana released a GH₵5 commemorative banknote in March 2017, though smaller in size, a legal tender in exactly the same way as the old note. It has modern security and informational features, like an engraved portrait of Dr. James Kwegyir Aggrey (the famous educationalist), a seaborne oil drilling rig, cocoa, coconut, cowries, and Adinkra.

Trade in Ghana is mainly based on cash, while cards are used but sparsely and even less used in remote areas. Forex bureaux give better exchange rates for bigger foreign amounts. Debit or credit card issuers outside Ghana sometimes rely on their clients for information before travel to enable access to ATMs here. Generally, GH₵50 notes are convenient for large purchases, but your regular trotro conductor or bottled water hawker will freak out about change. Though the old Ghana cedi has worn off, when someone tells you that a plate of waakye is 50,000, they really mean five Ghana cedis.