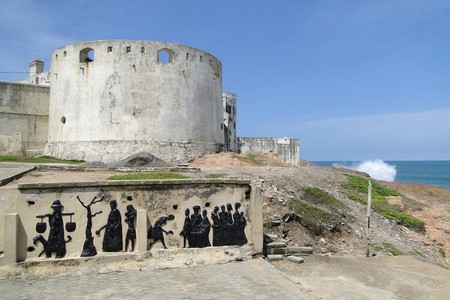 Originally built by Swedes for trade, Cape Coast Castle’s origins have been overtaken by its use in the transatlantic slave trade, where Africans were corralled and held before being shipped across the ocean for sale. A popular tourist destination, the Castle has always been an important point of pilgrimage for many on their visit to Ghana. We show you why.

By the cannons, looking out over the Atlantic, there is much to think about when stepping back in time.

"In everlasting memory of the anguish of our ancestors. May those who died Rest In Peace. May those who return find their roots. May humanity never again perpetrate such injustice against humanity. We, the living, vow to uphold this." #respect #ancestors #homesweethome #gh4life 🇬🇭

The Castle seen from the beach at Cape Coast, on an almost picture-perfect day.

President Obama is dwarfed by the scale of his surroundings, as he gives a speech on his visit with his family in 2009.

U.S. President Barack Obama speaks to the media following his tour of the cape coast castle, a former slave holding facility,in the town of cape coast.

President Obama’s visit was commemorated by a plaque.

A rare aerial view of the Castle shows its scale and dominance of the coastline.

The inside of the Door of No Return, which slaves would have walked through on their final steps as they left home soil for the ships that waiting on the other side.

Door of NO return…

From the outside of the door, looking in.

Today, Cape Coast is a lively fishing port, with the fishermen lining up their colourful boats outside the Door of No Return.

A much-photographed marble plaque in memory and respect of all the souls who passed through.

A huge building, the origins of which stretch back to the 1650s and the Swedish trade in gold and timber.

A recent art installation gave new weight to the Castle’s slave history, by placing sculpted heads into the holding rooms to evoke visceral reactions of humans being held in such a way.

Visited cape coast today. Walked through the doors of no return just as my ancestors did. Stood in the same dungeons they were held against their will. Today was heavy. #ghana #capecoast #slavecastle #newfriend #blessings #wisdom

In complete darkness I stood in the very dungeons which held many ancestors captive in utterly unimaginable conditions. I felt rage. I reveled in resilience. I shed tears. I felt the presence of countless souls who suffered and perished in this very spot. I smelled the remains of their DNA. These 5 small rooms held up to 1500 Africans at a time. In darkness and shackles, they had no room for anything. They even had to lay in their own waste for up to three weeks before being placed on ships headed to the Americas. It was the greatest honor to return here letting those souls know their lineage still thrives, even amidst continued relentless oppression. Realizing the strength of the shoulders we stand on we have no choice but to harness that power and soldier on. Nothing happening today should scare us…we've overcome far worse. That said we must stay informed, stay aware and continually #resist. This ride didn't just become bumpy in the last election cycle. Our nation has been sick since its creation. #getwellsoon #ghana #capecoastcastle #africa #history #slavery #weareroyalty #sankofa #travel

Brief glimpses of modern Ghana are viewed through the ancient grooves and ventilation.

Old life behind the #castle walls 👣

Along with the Swedes, Danish, and Dutch, the British also laid claim to the Castle at one point, due to the lucrative gains to be made in the transatlantic slave trade.

A total of 52 of the famous Welsh pirate Bartholomew Roberts’ men were hanged at the Castle in 1722.

George Maclean, a former governor and important figure in the abolition of the slave trade, along with his wife, the poet Letitia Landon are both buried in the courtyard at the Castle.

Spirit-filled. Visceral. Always an indescribable mix of emotions visiting these places. • Cape Coast Castle– a direct point of Afrikan terrorism where countless Ancestors were enslaved and dehumanized. Where anguish and the unfathomable thrived. Where the blueprint, the way forward and resiliency was strengthened. #RoyaltyInsideMyDNA #BloodMemory ✨🙏🏿✨

Awesome clouds roll over the Castle as another day is done, the building an ominous reminder of Ghana’s difficult history.

Near sunset over Cape Coast Castle where thousands of Africans were raped and tortured while being warehoused for delivery onto European slave ships. It's a monument to the savagery by Europeans that provided the luxuries that Westerners live in today.