12 Traditions and Customs Only Ghanaians Can Understand 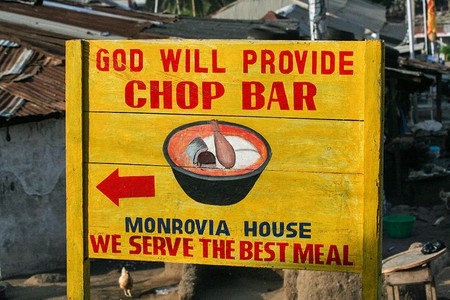 As the land of countless tribes and an abundance of languages and customs, Ghana is ripe with the idiosyncrasies that make this West-African country truly unique and special.

More than a symbol of greeting, this elaborate meeting of palms, thumbs and forefingers begins as a regular handshake then, before the two people withdraw hands, their palms slide together until their middle fingers are touching and then they turn their hands so that the palms are glimpsed before bringing together thumb and forefinger for the signature click at the end. A handshake to symbolise friendship and ease can be confusing at first, but it is simple, fun and is a great indicator of showing good spirit and familiarity to a fellow human.

We take food very seriously in Ghana and these three words are uttered when a person consuming food spots a friend or acquaintance and invites that person to join them. It is a turn of phrase and signifies that you are willing to share your food, but is very rarely taken literally. When it is though, expect the invitee to pull up a stool and fully tuck in!

Never hand anything to anyone with your left hand, unless you want to deeply offend them. Traditionally, before the advent of the toilet and toilet paper, you used your left hand to clean yourself after obeying a call of nature, and your right hand was reserved for eating food and interacting with others. Therefore to show anyone apart from a sworn enemy your right hand is to deeply offend someone to the point of anger. Take care!

To appease the sea goddess Maame Water, a ban on playing music exists throughout the areas held by the Ga people, whose lands are primarily on the shorelines of the country and take up a major part of Accra and its beaches. This means for a couple of months a year, it gets very quiet in Osu and places such as Kokrobite, where the stereo basses run deep. It can be strange to be in a bar without background music, but the Ga people take this practice very seriously, believing that Maame Water holds their luck for the coming year and to oppose her edicts would spell disaster. The ban is lifted for the festival of Homowo in May.

At some point in Ghana’s history, it was decided that the traditional salad in Ghana would consist of lettuce, tomato, onion, boiled eggs, tuna and… baked beans. Yes, baked beans. Heinz, in fact. With a smothering of salad cream on top of course. This ‘traditional’ salad is eaten on its own or by the side of jollof rice where the flavours and oddness come together to create something surprisingly tasty!

Sometimes English just won’t do and Ghanaians like to invent their own, more practical words and phrases. Two such ones are ‘traffigator’, an amalgamation of ‘traffic’ and ‘indicator’ as is used on a car and with an inserted ‘g’ for good measure. Another car-related word is ‘boganiser’ which, in Ghana, is the correct way we think ‘vulcaniser’ should be spoken. If you need new air for your tyres and go asking for a ‘vulcaniser’, the best of luck to you!

Out by Shai Hills, the tourists flock to see the baboons in all their familial glory, living wild in the open at the edge of the savannah preservation. What is not seen so often though, is the scourge these monkeys can be to the local community that lives nearby. Theft is the most common problem – of anything: foodstuffs, personal items and the most irritating, terrorising farmers’ livestock, such as chickens. To combat this, the locals hit on an ingenious plan: spraying the chickens a non-natural neon pink. It turns out the baboons won’t go near them in this hue. Strange and very wonderful!

Usually when a person dies, the body is buried within a couple of weeks, the family say goodbye and at the funeral people bring food and refreshments. This isn’t the case within some Christian tribes of Ghana who can leave loved ones in cold storage for up to a year and, in the most famous case in the country, five years, in order to prepare and save money for the funeral. Funerals are lavish affairs where the deceased’s family spend an inordinate amount of money to feed and entertain large numbers of people, therefore indicating how important the person was in life. 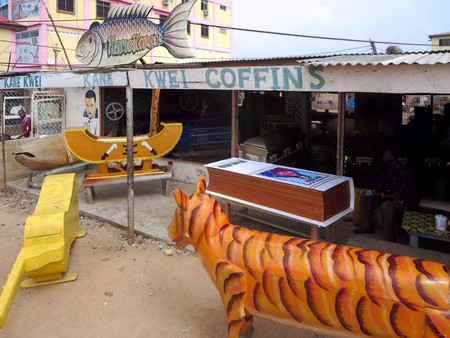 We’re not into birthdays

Or age, really. The Western obsession with attaching age of a specific number to people is not really done. Ghanaians believe in youth and elders, and this is a general thing, viewed in generational terms so good luck pinning down the specific ages of people! In the rural sense, especially in the old communities, birthdays were rarely documented and mostly these people guess within a 10- to 20-year range of what age they think they are, with mitigating factors such as social events and current affairs of the time. Newspaper articles are devoid of repeatedly mentioning ages, and it is common for people to claim whatever age they want in order to travel or get a desired job. Strange, but true.

Tweaka, roughly translated, it means ‘return to sender’ in patois, and is used along with a gesture that involves taking a thumb and circling it around one’s head before flicking the imaginary circle away and is used as a response when someone has ill will towards you, or says something negative. A serious spiritual rebuke, this is the Ghanaian’s way of swearing with added karmic retribution piled on top.

New Year is bigger than Christmas

It’s not sure when New Year became bigger than Christmas on the Ghanaian calendar, but in this era of evangelical superchurches this is the case. New Year has been re-christened ‘Cross Over’ and on massive billboards all over the country for months leading up to it, numerous conferences are advertised where powerful pastors from all over the world come together in front of thousands of worshippers to ring in the new year with a religious bent. It’s now more difficult to find a big New Year’s party or corporate sponsored non-religious events as almost everyone is in church, more so than at Christmas, making sure they ‘cross over’ to the next year with all the luck possible. 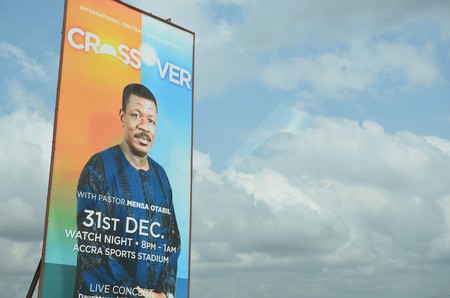 Sometimes it drives you mad, other times it makes you laugh, it just depends on what sort of mood you are in when a Ghanaian plays fast and loose with time. ‘I’m almost there’ more often means they are nowhere nearby and you should expect a wait of at least half an hour. When given a meeting time, always add half an hour or an hour, even for a business meeting. ‘I’m coming’, could mean ‘I haven’t even left yet’ and when you do eventually meet, especially in business, it’s best to go with the flow, knowing that most meetings will run over and end at a natural point and no one will check their watches. Ghanaians are essentially laid-back people, making for a more gentle approach to life but this can be very frustrating for the Western-minded person steeped in efficiency.