What to Know About the Gelada Baboon, World's Rarest Ape 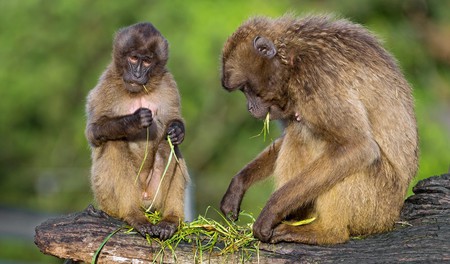 In the Semien Mountains that many call the Roof of Africa, there sits a species that looks like a cross between a lion and a monkey, enjoying the view of the Ethiopian highlands. This spectacular animal is called the Gelada baboon and is one of three endemic mammals to Ethiopia. A UNESCO World Heritage Site, this part of the country provides a suitable home for this old-world monkey. Here’s what to know about the Theropithecus Gelada, the world’s rarest ape.

A male baboon gathers about 5-10 females with which he will have exclusive mating rights. This is called a harem and is one of the most complex social structures of any animal other than humans. A harem has one male leader, females and their offspring. The leader of a harem is usually older than nine years old and can be overthrown by another male baboon through a fight that can sometimes last up to three days. Most of the bachelor males looking for a harem are younger. Once a leader is defeated, he remains in the former unit as a follower and usually assumes the role of babysitter for the young. Male baboons leave the unit at about the age of six to train for fighting and take over their own harem. Females stay in their natal unit for life. A group of harems form a clan that collectively make up the herd, which can number as many as 800 animals. 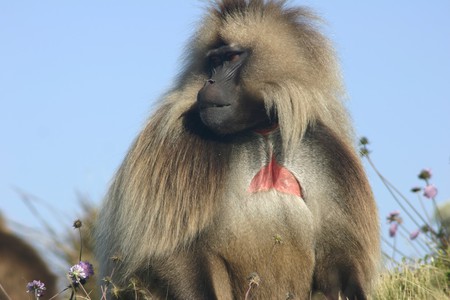 Although they don’t answer to it, the Gelada also go by another nickname, the bleeding-heart baboon, thanks to the red patch of skin on their chest. Both males and females have the bright red hourglass-shape that is revealed through their thick mane. The brightness of this shape, which changes between light pink and bright red, reveals the status of the male baboon in its clan and the female’s reproductive stage. The male baboon with a bright red mark on his chest is the leader of a harem and is in his sexual prime. A similar colour with blisters means the female is in oestrus.

Male baboons are more hairy than their female partners and also boast a larger size, with a height of 69-74 centimetres (27-29 inches). An average male baboon can weigh up to 20 kilos (44 pounds), while females weigh 12-16 kilos (26-35 pounds), standing 50-65 centimetres (19-25 inches) tall. An amazing feature of these animals is revealed as they flip their upper lips to threaten an opponent: canine teeth that equal those of a lion. Despite its fiery eyes and canine teeth that give it an evil appearance, the Gelada baboon is usually not aggressive towards human visitors.

Female baboons definitely run the baboon community. The male baboon leading the harem does the hard work, protecting the group from attacks and grooming members of the harem, but unless the female is convinced he is worth keeping, his leadership is over. As imminent attacks come from bachelor males in search of females, the females can choose to support their leader or replace him with a new one. The females also control the direction of the harem’s movements in their quest to find greener pastures. 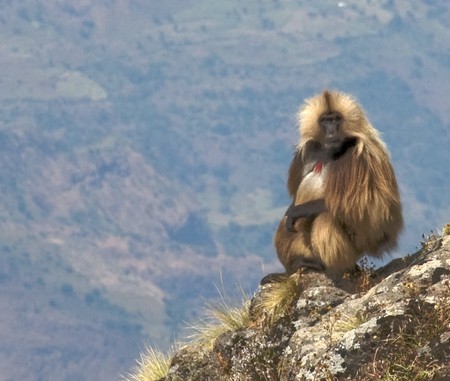 Female baboons will pick a male worthy of leading the harem | © A.Davey / Flickr

As they are strictly vegetarian, grass makes up 90% of the Gelada baboons’ diet. They are the only primates that are herbivores. With a life expectancy of 20 years, the Gelada baboons spend 60% of their life, about 10 hours each day, munching on grass. Baboons store food in their cheeks to soften it before swallowing. Seeds and aquatic weeds are preferred delicacies as they are full of nutrients.

The Gelada baboons constantly grunt while eating. This helps them understand where the rest of the harem members are so they can keep moving together. Each harem has its own distinct grunt that its members can easily identify. The grunt sound they make is one of 30 distinct noises made by these animals. With different sounds for danger, comfort, attacks and defense, the Gelada baboons are quite capable of exchanging messages and can sustain a long sequence of sounds, as if they are forming a sentence. Facial expressions, gestures and body postures are also used for communication.

Gelada baboons spend a significant part of their day socialising, which basically means grooming each other. As they have a diurnal sleep pattern, they sleep at night at the edge of a cliff to hide from predators and go about their business at sunrise. Either grooming, munching on grass, mating or fighting, the Gelada baboons mostly seem in haste to complete one task and move on to another. They travel in large groups of up to 1200 individuals – the largest groups observed among any primate. 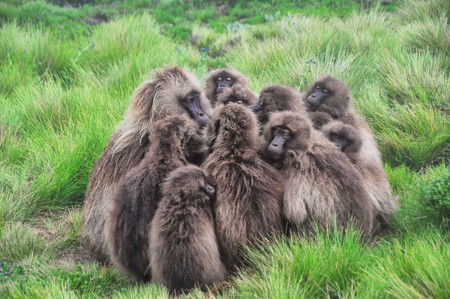 The Gelada baboon is not a threatened or conservation-dependent species. In fact, it has been identified as a least concern species by the International Union for Conservation of Nature (IUCN). Unless authorised by the Ethiopian government for the purposes of national interest and scientific research, it is illegal to hunt, kill or collect these animals.