This Ethereal Landscape is the Hottest Place on Earth 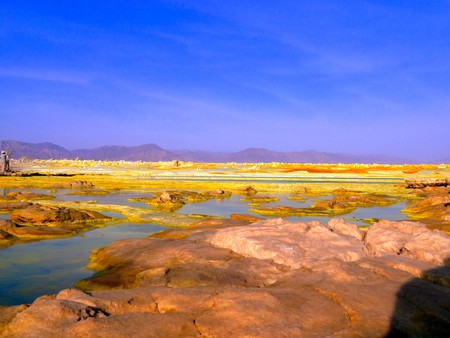 Unwavering under the scorching heat, the nomadic Afar people in northeastern Ethiopia welcome you to a land unlike any other on earth – the Danakil Depression. This must-see area is often described as otherworldly, and for good reason. Here is what you need to know about the hottest place on Earth.

Located near the borders of Eritrea and Djibouti, the Danakil Depression in Afar is 120 meters below sea level and daytime temperatures soar to a sweltering 50°C (122°F) in the summer (there’s no air conditioning to beat this world record breaking heat). In the heart of the depression lies a place called Dallol that features salt mines and magnificent multicolored landscapes that give you the impression of a carefully painted art book. 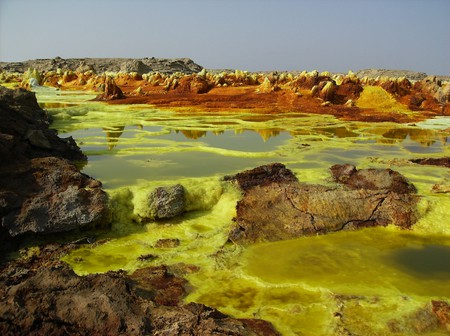 Because of Dallol’s high humidity and toxic vapors coming out out of sulfur pools, the unbearably hot temperatures stick around even during the night. Although temperatures higher than this unique place have sometimes been reported in other parts of the world, Dallol stands out with an average low temperature of 30°C (87°F). The extreme climate makes Dallol inhospitable, which is why it’s a ghost town. But not far from this area, the Afar people have made a village they call Hamadela their home.

Thanks to the Red Sea floods from thousands of years ago, Dallol has a rich salt pan. Some of the Afar people earn their livelihood by cutting slabs of salt in these extreme conditions, transporting them to a market town on camel caravans and selling them to merchants. 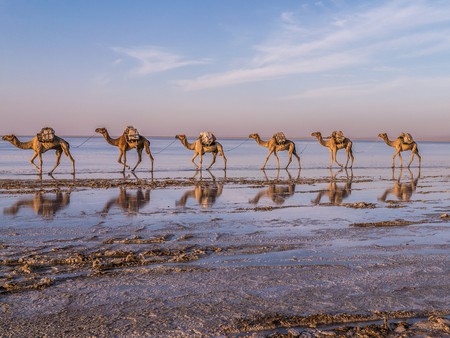 Dallol is dotted with many pools that contain yellow, blue and green liquid (they’re definitely not as pleasant to step in as they are to look at). The liquid is sulfuric acid that results from a mixture of seawater salt and volcanic minerals from magma. The acid is powerful and can immediately melt items it comes into contact with. Needless to say, touching it is off limits.

The Danakil Depression is also home to one of the world’s oldest active volcanoes, Erta Ale. The name translates to ‘the smoking mountain’ in the local language. When you see the bubbling lava from the volcano and feel the unbearable heat, you will understand why the Afar people call this place the gateway to hell. 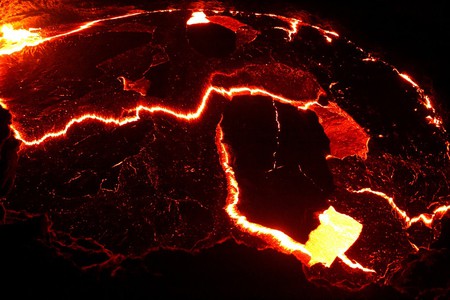 This depression is often mentioned in reference to the discovery of Lucy in the area in 1974. Because of these skeletal remains, which showed that human ancestors existed in this place over 3.2 million years ago, Ethiopia came to be known as ‘the cradle of humankind’.

For those interested in exploring this spectacular place, do note that Mekele, the Ethiopian city in the northern part of the country, is a good starting point. To reach Mekele from the capital city Addis Ababa, you can fly via Ethiopian airlines or hop on a day-long bus ride and enjoy the country’s beautiful landscape along the way. From there, it’s either camel caravans or a vehicle suited for the rough road ahead. Remember that many prefer to hire a tour guidedefin. Bon voyage!