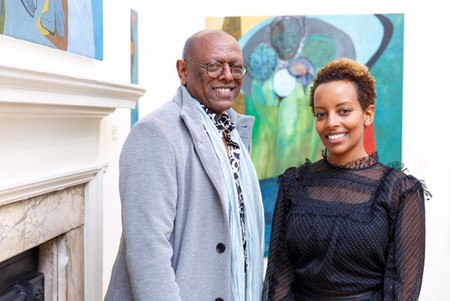 Since opening in 2016, Addis Fine Art has gone from being the first white space gallery in Ethiopia, to an internationally recognised art house. Its goal is simple: give Ethiopian and diaspora artists a platform to showcase their works beyond Africa. Recently hailed as one of the most important young galleries in the world by online art platform Artsy, Culture Trip speaks to Mesai Haileleul, the gallery’s co-founder, about its mission to make contemporary and modern Ethiopian art a household name. 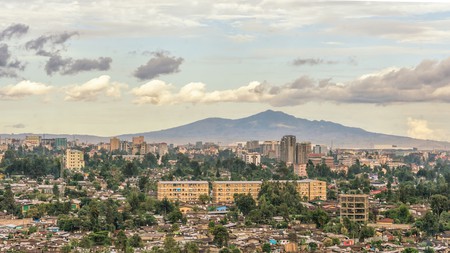 It’s a typically frenetic Saturday afternoon in Bole, Addis Ababa’s vibrant entertainment district. Ethiopian pop music blares out of a nearby arcade as the infamous traffic crawls past. The cafés around Edna Mall are packed with macchiato-sipping twenty-somethings; the streets are busy with people in flux. Just one street back, along an unassuming, dusty road, it’s a different story altogether. Hidden away from the crowds, Addis Fine Art sits on the third floor of a pink tower block. It’s one of Africa’s most exciting galleries, but much like Ethiopia’s contemporary art scene, it’s easy to miss if you don’t know where to look. 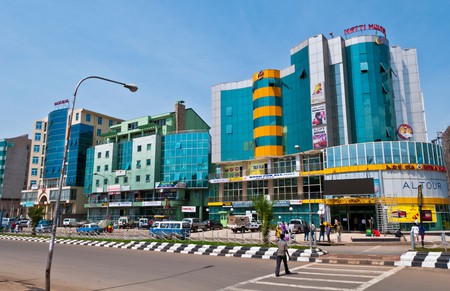 The idea for a gallery space came about when Rakeb Sile, a London-based art collector and businesswoman, grew increasingly frustrated with the lack of Ethiopian representation. In 2013, her ambition led her to Los Angeles, where Haileleul, a veteran collector and exhibitor, was living. Haileleul had run a series of pop-ups and a small gallery, with a focus on Ethiopian contemporary and modern art. A trip home would be the source of his inspiration. After 18 years away, he found a very different country to the one he left: almost three decades under rigid communist rule and horrific famine had left Ethiopia shattered, so discovering a thriving art scene was a surprise to Haileleul.

“I came back in 1992. Thereafter, I was spending a lot of time with Ethiopian artists,” he says. “I was visiting studios and a friend of mine was taking me around… I was amazed by the talent.”

From London to Addis and back

With his connections in Africa and abroad, Haileleul was the obvious man to help. The pair had some initial success with a temporary gallery space in London, but soon agreed that if they were going to represent Ethiopian art, they’d need a space in East Africa.

“I spent most of 2014 trying to see if it was even possible. To see what it would take to open a gallery, not just a space here in Addis, but an international gallery that could link up with people outside of Ethiopia,” Haileleul says.

In 2016, a permanent gallery opened its doors, supported by a temporary space in London shortly after. The gallery spanned two continents, acting as a bridge to the international art community. “We could offer this connection with the outside world – the international art market. We are the first real gallery to have done that in the history of this country, which is crazy,” he says. 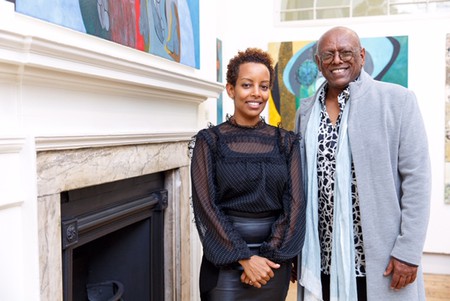 These connections have proven to be invaluable – just six weeks after opening, Addis Fine Art found itself at the Armory Show in New York, a major coup for a relatively young, unheard-of gallery. The gallery has since displayed at huge fairs in Dubai, London, Paris, Johannesburg and Lagos. In a short space of time, it has shot to the forefront of the African art scene.

“The main goal is to help Ethiopian artists get more international exposure,” says Haileleul. “It’s the process of building a bridge. That means, at times, showing works in our space, but more importantly, getting the work into the big, important international fairs.”

So far the plan seems to be working. Recently at 1-54 Contemporary African Art Fair London 2019, an estimated £60,000 worth of work by three Ethiopian and diaspora artists was sold – Merikokeb Berhanu, Tadesse Mesfin and Ermias Kifleyesus. 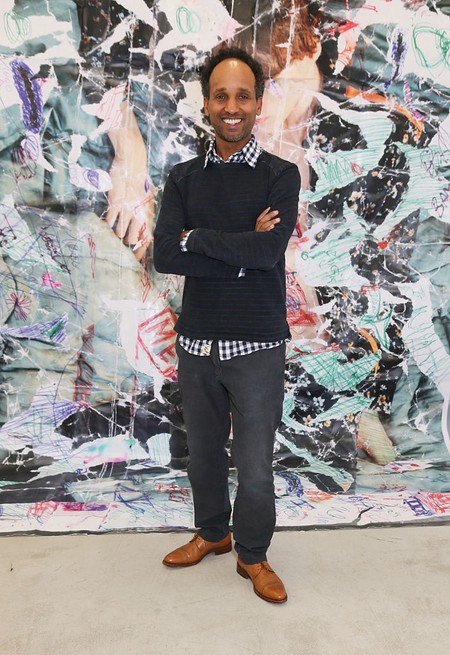 Ethiopian artist Ermias Kifleyesus was one of the artists represented at the 2019 1-54 Contemporary African Art Fair in London | David M. Benett / Getty Images

The next step, according to Haileleul, is targeting the more mainstream fairs, those with a broader focus, beyond African art. The gallery saw its first collaboration with UNTITLED, ART in Miami Beach in December 2019, showcasing the works of abstract minimalist painter Tariku Shiferaw.

Unfortunately, giving Ethiopian artists an international platform is only half the challenge: there are obstacles at home, too. The biggest issue is tax – there’s currently a hefty 30 percent income tax on an artist’s earnings – not to mention the many, confusing legislative hoops they must jump through.

“They’re not accountants,” laughs Haileleul. “If you want to operate here legally as an artist, the tax issue is really very discouraging.” Setting up a business is also far from easy, a problem that stems from the way artists are taxed – there’s no differentiation between the art and manufacturing sectors, for example. Making this distinction is crucial if artists are to flourish in Ethiopia.

“Everybody has to pay tax. But artists are not businesspeople; they’re not running a business. So, if you make it complicated, they will end up in a grey area.” 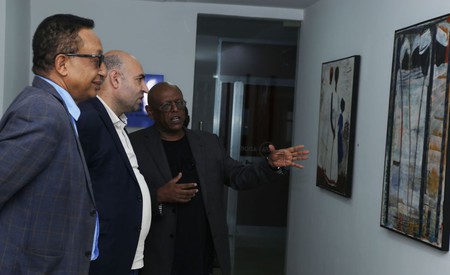 The gallery acts as a business partner and agent for its artists, helping with transactions, taxes and receipts | Anadolu Agency / Getty Images

For its Ethiopian-based artists – around half of the 15 on its books – Addis Fine Art is much more than a white room in which to hang their works. It’s become an important bridge between the business and creative worlds.

“We have also become tax collectors,” jokes Haileleul. “We represent them so that everything is legal.” Effectively agents, the gallery handles the official side of things – transactions, receipts, tax, reporting to the right government bodies etc – so that the artists don’t have to. According to Haileleul, this allows the artists to focus on their work.

Haileleul hopes the international interest in Ethiopian art will sooner or later lead to meaningful change at home. It does seem as if the government is starting to come around. Prime Minister Abiy Ahmed, winner of the 2019 Nobel Peace Prize, recognises the importance of the country’s culture sector – but concrete policy has yet to be passed. 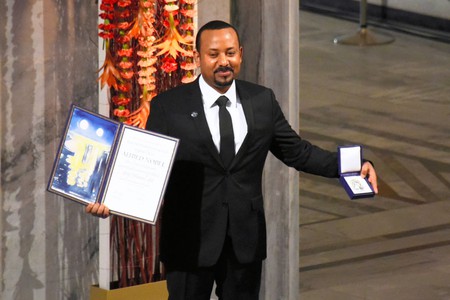 Ethiopian art has been gaining popularity on the international art scene in recent years thanks also to the country’s prime minister Abiy Ahmed, the winner of the 2019 Nobel Peace Prize and an ambassador for Ethiopian culture | The Asahi Shimbun / Getty Images

A bright future for Ethiopian art

The next big step for Addis Fine Art will take place in London. The gallery’s UK-based team is growing fast, and a permanent gallery space looks set for spring 2020 – the location, Cromwell Place in Kensington, is already agreed. 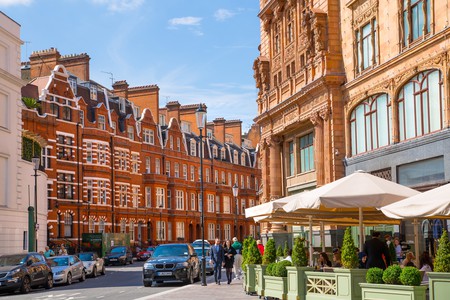 It’s to be the big focus for next year and Haileleul’s excitement is palpable. “That’s a game changer. We’re not going to be just a typical white box on a street corner in London. This is a whole block with multiple galleries [initially 20] and a lot of exhibition space,” explains Haileleul. “With all these different galleries in one place, that will bring in all kinds of people that might not have discovered us otherwise.”