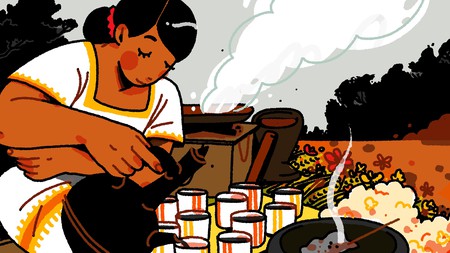 In Ethiopia, coffee is much more than an early morning eye-opener – it’s an important part of cultural life. Not surprising, in a country that’s been drinking coffee for more than 10 centuries. Even today, Ethiopians consume around half of their annual coffee crop, exporting the rest.

Nowhere is Ethiopia’s special relationship with coffee more apparent than its traditional coffee ceremonies, or jebena buna. Savoured among friends and family, and never ordered on the go, this is coffee at its slowest, strongest and most sociable.

In the last decade, an influx of western-style coffee shops and the increasingly popular macchiato have added a new element to Ethiopian coffee culture. However, these ceremonies still have an important place in the nation’s heritage and experiencing one is a truly special event.

Culture Trip takes a look at Ethiopia’s long history of coffee, its traditional preparation process, and its cultural significance in this part of East Africa. 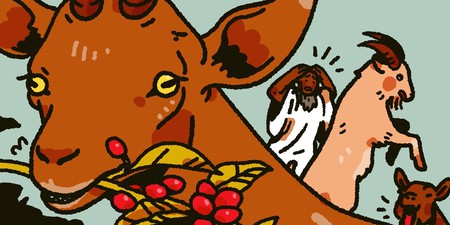 The birthplace of coffee

Ethiopia calls itself the “birthplace of coffee”, but the drink’s discovery might never have happened were it not for a few hungry goats and their curious herder, Kaldi, at some point in the ninth century. According to local legend the flock became excitable after grazing on an unusual red fruit. Spotting their jumpy behaviour, old Kaldi took the berries to the local monastery, where they were promptly burned for fear that the fruit contained the devil.

Luckily for coffee-lovers everywhere, the monks quickly forgot about this new, impending evil once they caught a whiff of the roasting beans: how could something that smelled this good be a sin? Pious minds changed, the monks began preparing the strange fruit with water, eating the berries before drinking the liquid. Suddenly, all-night prayers and chanting sessions had never been so easy.

Before long, the bean found its way to Turkey, by way of Arab traders. It was here, in the 15th century, that the drink we now know as coffee was brewed into existence. From Turkey, coffee spread through Europe until its caffeine-fuelled world domination was complete.

Today, coffee is consumed at a staggering rate world-wide, all thanks to a few goats.

Sensually rich and notoriously lengthy, the Ethiopian coffee ceremony is not for those in a hurry – or with a less than superhuman tolerance for caffeine. But like the drink, it’s an experience to be savoured.

The coffee ceremony begins with the host, always female, spreading an assortment of fresh grasses and flowers on the floor and table. An incense burner, typically filled with frankincense or sandalwood, is lit, filling the air with an intoxicating aroma.

Next, raw coffee beans are washed before being roasted thoroughly in a skillet over an open charcoal fire. This continues until the beans are black and charred. Often the host will encourage guests to smell the strong beans, holding the pan in front of their eager noses. By now, the smell of coffee is mixing with the incense, creating a heady effect.

The beans are vigorously ground with a pestle and mortar, before being added to the jebena, a special spouted pot containing boiling water. The jebena, is placed back over the charcoal in order to brew.

Once the coffee is brewed, the host carefully pours it into small, handleless cups. The cups are filled right to the brim, but not a drop over, and drinking without spilling is an art in itself. The coffee is bitter, thick and potent.

Using the same beans, the process is then repeated twice more. In between cups, more water is added to replenish the drink. This continues until the ceremony is complete; the whole ritual can take well over an hour.

There are a few optional extras that sometimes accompany the ritual. Usually, a few heaping spoons of sugar are added to sweeten the coffee and a small plate of popcorn is served as a side snack. You might also find local herb rue (t’ena adam, in Ahmaric) added into the mix, which gives the coffee a refreshing citrus quality. In some rural communities, salt or butter are favoured over sugar. 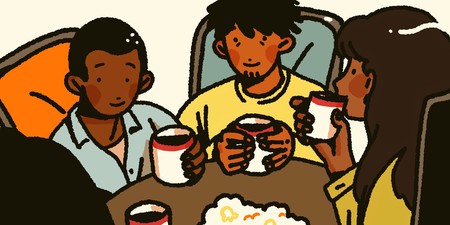 Besides its beautiful presentation, the ceremony has a strong social and cultural element to it. The three cups each have a distinctive role in the ritual. Arbol, the first, is the strongest. Cup number two, or tona, is milder after the second brewing. The final cup, berekha, holds the most importance as it signifies a blessing. In some of Ethiopia’s more traditional households, particularly in rural areas, the ceremony takes place at least three times a day. In all, that’s a sleep-shattering nine cups of coffee.

First and foremost, though, the ceremony is an act of hospitality. For new acquaintances, the ceremony is a welcoming and a form of respect. Among friends and family, it’s a way of catching up or reconnecting. After three cups of Ethiopian coffee, there’s never a shortage of conversation.

While the richest experiences undoubtedly occur in the Ethiopian home, it’s become increasingly common to find coffee ceremonies, albeit condensed versions, in cafés all over the country, from Addis Ababa to Axum. Sometimes the cafés are nothing more than a tent at the side of the road, decked out with small plastic stools and the traditional coffee set.

Ethiopian capital Addis Ababa is home to some of the best coffee in the country. Local tour company Go Addis shares three of the best city cafés at which to experience an authentic feeling for Ethiopia’s special coffee culture.

The flagship restaurant of the Kategna chain located on the corner of Airport Road and Ring Road Bole Milennium, offers a bite-sized version of the coffee ceremony in slick, Japanese-inspired surroundings. Famous for its contemporary take on Ethiopian cuisine, it’s super popular with Addis’s growing middle class. Anthony Bourdain fans will recognise it from Parts Unknown. The coffee ceremony takes place in the corner by the bar, hidden away – just follow the scent of incense. Despite Kategna’s upmarket feel, it’s good old nostalgia that brings the punters in for a brew.

“The place feels like home to many Ethiopians. Now in Addis, many places tend to mix their coffee, and not always with good products, but the coffee here is always good quality. People like to catch up with their friends here, even if they’ve eaten elsewhere,” says Buzuaye, Kategna’s coffee server.

Tucked away at the bottom of the Sunshine Apartment block in the up-and-coming Gerji district, this no-frills, local favourite is as close to the traditional coffee ceremony as you’re likely to find in Addis. Like many vendors, business owner Mekdes rents a space in the restaurant, roasting the coffee beans over charcoal in a small metal pan. The café is known for its shiro (a sort of chickpea stew), which Christian Orthodox Ethiopians eat during their fasting days. It’s Mekdes’s roasting preference, however, that keeps people coming back for more.

“I roast the coffee to medium, which retains more of the caffeine and gives you better coffee. On Wednesdays and Fridays (fasting days) I go through three-and-a-half kilos of coffee each day. On average, I’m selling 100 cups of coffee a day,” she says.

A coffee-themed John Lennon poster, complete with espresso spectacles and roasted bean hair welcomes visitors into this quaint and quirky café. A popular one with Addis night owls, the café is one of the few places in the city that stays open 24 hours a day. It’s this fact, as well as the excellent coffee, that keeps it busy around the clock. Along with plumes of fragrant incense, owner Tiru roasts the coffee on a traditional flat pan – it might well be the best-smelling café in Addis.

“I choose my coffee very well, and prepare it very carefully, washing it by hand before roasting,” says Tiru. The coffee is carefully selected from the Jimma and Wollega regions, both of which are famed for their coffee.

This café is a main-stay on Go Addis’s food tour of the city.