The Battle of Adwa, a Trailblazer for Africa’s Independence 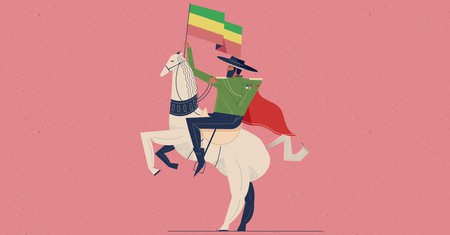 The sound of gunshots disrupts the silence of a Sunday morning on March 1, 1896. A trailblazing battle that broke the shackles of slavery, racism and oppression was about to change the course of Ethiopia’s history. This was a battle that helped Ethiopia to remain an African nation that has never been colonised.

As the second half of the 19th century unfolded, so did the strong drive for European imperialism, and with it a new imperialist power, Italy, with intentions to invade and colonize Ethiopia. In the quest to build a new colonial empire, the Italians put to use various strategies, including supplying weapons to the two contending emperors of Ethiopia at the time, Emperor Menelik II and Emperor Yohannes IV, encouraging them to wage war against each other.

The major point of contention between Italy and Ethiopia, however, came in the form of one of two agreements that were signed between Emperor Menelik and the Italians: the Treaty of Wuchale. Article 17 of this agreement had different meanings in the Amharic (the national language of Ethiopia) and Italian version of the document. The former stated that ‘Ethiopia could use Italy’ if she entered into dealings with other European powers, while the latter said ‘Ethiopia must use Italy’. The refusal of Emperor Menelik to accept this treaty led to the most famous battle in the anti-colonial struggle of blacks in Africa.

Emperor Menelik II led the Ethiopian army against the Italians near the town of Adwa in northern Ethiopia. In one of his books chronicling the battle, Professor Kinfe Abraham writes, ‘When the Italian army was devastatingly defeated by Ethiopian soldiers, the news managed to reach Africans under colonial rule. There was great rejoicing by Africans everywhere, and the hope of freedom was rekindled.’ The battle led to Ethiopia being seen as a beacon of independence, and remaining an African nation that has never been colonized.

The victory of Adwa had rippling effects on the struggle for independence in other parts of the African continent, through leaders like Kwame Nkurmah of Ghana and Jomo Kenyatta of Kenya, and the emergence of Pan-Africanist movements.

The heroes and heroines of the battle emerged, in the face of a well-renowned female warrior, Empress Taitu Betul, who marched with Menelik and the imperial army, or in the face of unsung heroes like Dr Melaku Beyan, who wrote in defence of his country’s independence at the time of the Italian occupation on his weekly papers Voice of Ethiopia and Ethiopian Review. He was not only an activist, but was also the first Ethiopian to graduate with a medical doctorate from an institution in the United States. He is also credited for merging, in 1937, pro-Ethiopian organisations into a new Ethiopian World Federation. His slogan was, ‘Better to die a free man than live in slavery’.

Some 122 years later, Ethiopians look back at this period of the nation’s history with pride. Every year, many gather around a square named after the late emperor, in the heart of the capital city Addis Ababa, in front of St George Church at Piassa. Some make a 46-day journey on foot from Addis Ababa to the historical mountains of Adwa to celebrate the day on the same soil on which the historic battle took place.

Many songs and writings circulate on social media praising those who have chosen patriotism over their lives. As cannons are fired early in the morning heralding the celebration, Ethiopia remembers its indomitable warriors and the unfaltering strength of all black people in the face of struggle for freedom.