Ethiopia's Simien Mountains: Trekking On The Roof Of The World 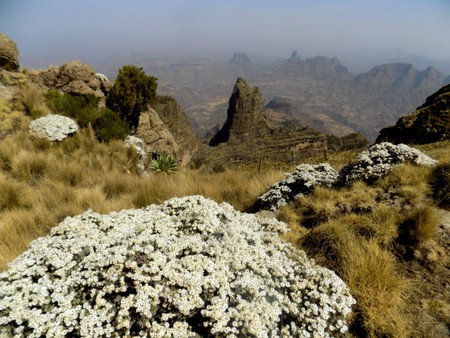 Hiking the Simien Mountains is a world-class experience which offers stunning views of awe-inspiring jagged peaks and sharp precipices, as well as the chance to spot some endemic wildlife such as the rare Ethiopian wolf and the elusive Walia Ibex. Challenging enough for most hillwalkers, this trek can be enjoyed by people with different levels of experience and fitness.

‘The most marvelous of all Abyssinian landscapes opened before us, as we looked across the gorge that was like clouded amethyst to the peaks of the Simiens. A thousand years ago, when the old gods reigned in Ethiopia, they must have played chess with those stupendous crags, for we saw bishop’s miters cut in lapis lazuli, castles with the ruby of approaching sunset on their turrets, an emerald knight where the forest crept up on to the rock, and, far away, a king, crowned with sapphire, and guarded by a row of pawns. When the gods exchanged their games for shield and buckler to fight the new men clamoring at their gates, they turned the pieces of their chessboard in mountains. In Simien they stand enchanted, till once again the world is pagan and the titans and the earth gods lean down from the monstrous cloud banks to wager a star or two on their sport.’

With its jagged mountain peaks, deep valleys and fear-inspiring precipitous cliffs – some as deep as 1,000 meters – the bizarre geology of the Simien Mountains could not be more worthy of the lavish description above. Inscribed as a UNESCO World Heritage site in 1979, the Simien Massif is a high plateau which includes dozens of peaks above the 4,000-meter mark, amongst them Ethiopia’s highest mountain and the fifth-highest in Africa, the 4,533-meter Ras Dashen. 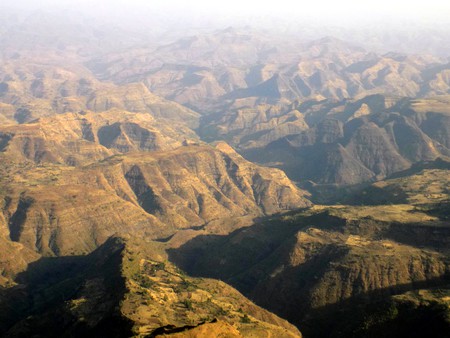 The otherworldly formations are the result of a sustained period of volcanic activity between 40 and 24 million years ago, which covered the original soft and fossil-rich sandstone and harder limestone with a thick layer of basalt lavas. Over millennia, and thanks to the work of glaciers and sustained storms, weaknesses and cracks soon widened and deepened, leaving us with the knife-edge pillars and needle-shaped columns so reminiscent of a Lord of the Rings landscape.

On a par with the park’s geology is the diversity of habitats, which span from the lower cultivated slopes through a liken-draped Afromontane forest, up to the characteristic Afroalpine grassland of the highlands. As well as being home to the enormous versions of plants found in the rest of the world, such as the Giant Heath and Giant Saint Johns’s Wort, the Simiens are punctuated by the distinctive Giant Lobelia and carpeted with wild flowers like the Abyssinian wild rose and silver clusters of everlastings.

While these habitats are home to many different species of mammals, such as bushbucks, hyenas and jackals, it is the three species endemic to Ethiopia which most visitors will want to see. The national park is the last known stronghold of the agile Walia Ibex, a cliff-climbing species of mountain goat which was the original motivation behind the range being granted National Park status in the 1960s. Less elusive, but a whole lot noisier, the Gelada Baboon – said to have a vocabulary of at least 27 different contact calls – is a common sight during the trek. On the other hand, you will be lucky if you get to see one of the extremely rare Ethiopian Wolves, which with a population of only 50-60 individuals in this area (there is also a small group further down south, in the Bale Mountains) is dangerously close to extinction. Resembling a fox, thanks to its long muzzle and diminutive size, the Ethiopian Wolf is most likely seen on the upper slopes of tall peaks, but you might have a chance to see them hunting at sunset or dawn in the grasslands around Geech Campsite. 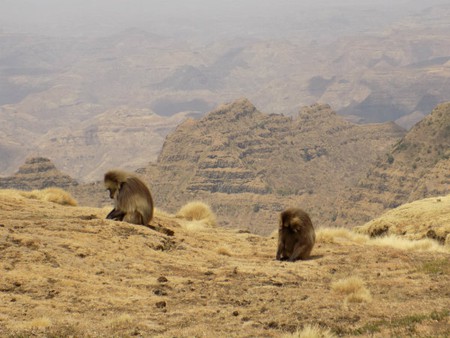 It is possible to organize your hike with one of the many tour operators in Gonder, the historic city which lies 100 kilometers to the south of the park. These tours will typically include transport between Gonder and Debark, the starting point for the trek, and will take care of all park red tape, camping equipment, food, water, guide, scouts and mules. These last-minute trips, which can be organized the day prior to departure with one of the many brokers that will approach you on the street, often offer the best deals but can sometimes feel a little ‘hodgepodge,’ and you may be left waiting around for your transport or mules to be arranged.

Alternatively, you can arrange a tour well in advance, from abroad or in Addis, with one of the many tour companies. SimienEcotours is one of the companies that offers a good range of packages at competitive prices. What sets them apart from the others is their focus on responsible tourism and the fact that they fund a number of different conservation projects, from beekeeping to the construction of rubbish dumps, which you can visit as part of your trek. SimienEcotours can arrange an individual tour for you, or you can join one of their fixed departure tours for four days and three nights.

Unlike many other mountain ranges in Africa, it is entirely possible to trek the Simien Mountains without a guide. The only person you are required to hike with is an armed scout, but judging by the age of some of the guns – many of which are leftover from the first Italian attempt at colonization in the 1930s – and the fact that the Simiens are pretty safe, it is unlikely that you will be hearing any gunshots during your trek. All red tape, such as paying for park fees and arranging optional guides, has to be done at the Park Headquarters in Debark. Although not strictly necessary, since the scout will know the way, taking a local guide is a good way to know more not only about the flora and fauna but also about life in the villages in and around the park. You will also be contributing to the local economy and most probably helping to put one of these young guides through guide school. Ask for the Local Guide Association at the park headquarters or contact one of the guides below. When hiking independently, you will have to bring all of your own camping gear and cooking equipment, especially if you are going for a longer trek. If you are going for three nights only, you can sleep at one of the community lodges adjacent to the Sankaber, Geech and Chennek campsites. These ‘lodges’ have basic facilities but are warm and clean for the most part. And unlike most tourists who stay in the campsites, you will have the opportunity to hang out with the locals, have a few beers around the fire and maybe even dance to some shoulder-jerking Ethiopian music in the evenings. 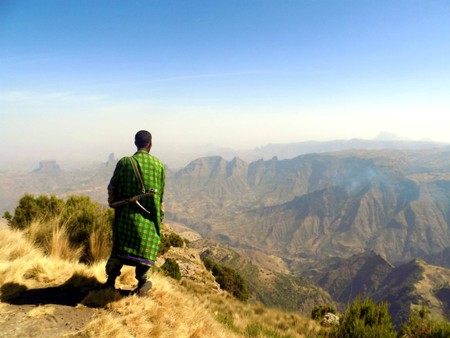 The most popular trek is the one that takes you from Debark to the Chennek campsite, which usually takes four days and includes some of the most fantastic scenery in the Simien Mountains. The campsites along this route – Sankaber, Geech and Chennek – all have adjacent community lodges which offer simple but delicious Ethiopian food such as injera and shiro, as well as a selection of sodas and – best of all – cold beers. Make sure to take one up with you to Geech viewpoint at sunset for an unforgettable experience.

Not to be missed is the stunning 533-meter-deep Jinbar Waterfall, which dries up to a trickle during the dry season. Nonetheless, the sheer enormity of the gorge and the site of huge bearded vultures gliding effortlessly below you should be enough to gawp at. Imet Gogo is another highlight of the trip. This promontory, which stands at 3,926 meters, affords 360-degree views, arguably the best in the Simien Mountains. From Imet Gogo, the most scenic route follows the escarpment, where you will come terrifyingly close to sheer cliffs dropping hundreds of meters before reaching Chennek.

If you are still feeling up for it, you can prolong your trip and climb Mt. Bwahit, which at 4,430 meters, is the park’s second highest peak. If claiming high peaks interests you and you have eight days to spare, you will probably want to keep going to Ras Dashen. Although less visually intriguing than the first part of the trek, climbing the highest peak in Ethiopia will definitely grant you bragging rights and will take you to lesser-visited parts of the park.

Trekking in the Simiens is possible at any time of year, but each season will bring with it a different experience. Many tourists choose to go between September and November when the landscape is alive with green after the rainy season. December through April is also fine hiking weather, as the sun is often out and temperatures are higher, but views tend to be a little hazy, and the landscape turns from vivid green to yellow and dry. The least popular hiking months are June, July and August when rain falls daily.

Temperatures during the day tend to be comfortably warm in all seasons but can fall below zero at night, so pack warms clothes and a good sleeping bag. 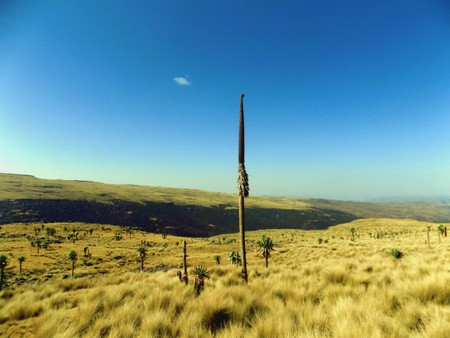 After years of negative press, Ethiopia is finally becoming a tourist destination, as it deserves to be. But with increased numbers comes increased pressure on the environment, and the Simien Mountains are suffering. To make sure that your environmental impact is minimal, you can take the following steps:

• Do not collect or damage any vegetation and do not disturb or feed wild animals;

• Remember to take all of your litter with you;

• Camp only in designated areas;

• Always use latrines where provided, or bury waste at least 100 meters away from water;

• Do not use soaps in natural waterways.

Another issue in the Simien National Park is the question of who benefits from tourism, as all too often it is not those who grew up and live in the area. Most local employees, in fact, from scouts, porters and cooks to local guides, make very little money, so account for tips in your budget.

With their dramatic scenery, unique plants and rare animals, the Simiens are a highlight in a country where there are few lowlights. Whether going for a day trip or a two-week trek, this park will not fail to astound even the most seasoned of hikers and promises to become one of the world’s best hiking spots.