A Guide to Traditional Ethiopian Cuisine 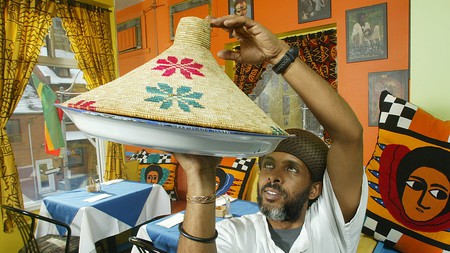 Food is an intrinsic part of Ethiopian culture, tied to religion, history and a deep understanding of the land | © Ron Bull / Getty Images

Not a knife or fork in sight, chilli for breakfast and a mild obsession with raw meat, this Culture Trip guide takes a look at the foundational and most celebrated dishes of Ethiopian cuisine.

Traditional Ethiopian cuisine is as distinctive as the country it comes from. A big part of the national identity, food runs deep through Ethiopia‘s ancient culture. Often intimate, always hands-on, it has a strong communal element that creates a dinnertime bond unlike anywhere else in the world. From hearty, tongue-tingling stews and all-purpose flatbread, to powerful home-brewed honey wine, there’s nothing quite like eating out in Ethiopia. 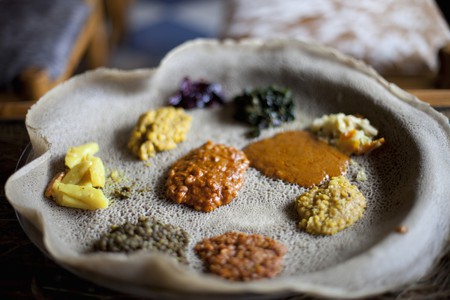 As the foundation of almost all Ethiopian food, injera is bread, utensil and plate rolled into one. It’s a sour, tangy flatbread made from the super grain teff, which has a spongy texture, ideal for soaking up flavour. Meals often come served dolloped onto a large, circular injera, a colourful palette of delicious curry-like stews, fresh salads and sautéed vegetables.

Injera typifies Ethiopia’s tradition of communal eating, with friends and family sitting around to share the same bread, tearing pieces from the edge, scooping away whichever dish it accompanies. A vast country with over 80 ethnic groups, all Ethiopians are united by this simple bread. 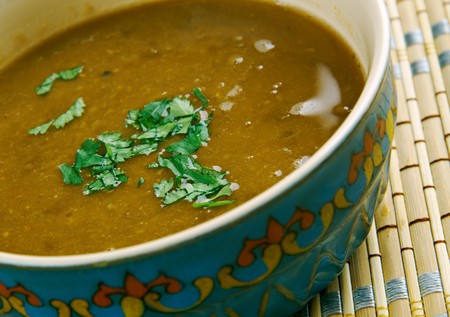 A clay-red stew of chickpeas and broad beans, shiro is a vegetarian’s best friend in meat-mad Ethiopia. Known as ‘fasting food’, Orthodox Christian Ethiopians usually eat shiro on Wednesdays and Fridays, when they abstain from meat and dairy.

Subtly spiced, and often accompanied with chilli, garlic and minced onions, shiro can vary slightly from region to region depending on available ingredients, but its distinctive colour and creamy texture are ubiquitous. In more traditional restaurants, it’s served in a small clay pot taken straight from the stove, red hot, bubbling and spluttering. Head to Tsige Shiro, a specialist shiro place in Bole, Addis Ababa. 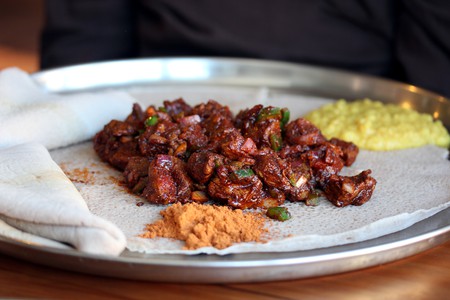 Wot is Ethiopia’s answer to curry. A national favourite, it can be made from pretty much anything, but doro (chicken) is by far the most popular choice. Cooked slowly, it’s a thick, oily stew with a fiery kick. Expect tons of heat – berbere, a tongue-tingling concoction of chilli powder, ginger, fenugreek, cardamom, garlic and other spices, is used heavily – and rich flavours.

Wot is a popular meal for special occasions, particularly after prolonged periods of fasting at Easter and Christmas. Siga wot (beef) and misir wot (lentils, a good option for vegetarians) are other common types to try. For good doro, drop in at Kategna, a trendy place in Bole known for its modern takes on traditional classics. 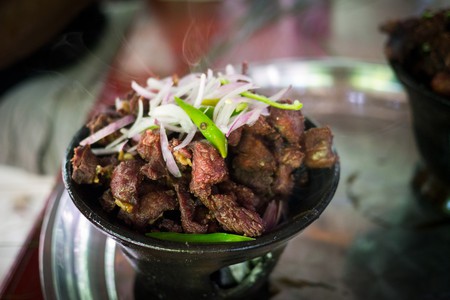 Chunks of meat, fried in niter kibbeh (clarified butter) and served still sizzling – there’s no messing around with tibs.

It’s a simple classic, cooked with red onions stir-fry style, accompanied with fresh greens and ever-present injera. Depending on how it’s garnished, it can be a mild or spicy dish. Heat things up with sliced fresh green chilli and plenty of berbere sauce.

Beef is the big favourite, but lamb and chicken are usually on offer, too. More traditional joints often have their own meat counter: slabs of red meat hanging on hooks, a butcher happily chopping away – it’s a good sign that the tibs is fresh.

Firfir is a popular breakfast dish made from leftover injera. Shreds of the flat bread are cooked in a simple sauce of berbere, onions, oil or butter and sometimes with scrambled eggs (enkulal firfir).

If hot chilli sauce first thing in the morning doesn’t entice, firfir is a winner any time of day, particularly for vegetarians who fancy a break from shiro. Another variation, chechebsa firfir, swaps out injera for pitta-style flat bread. Fried, of course, in berbere. 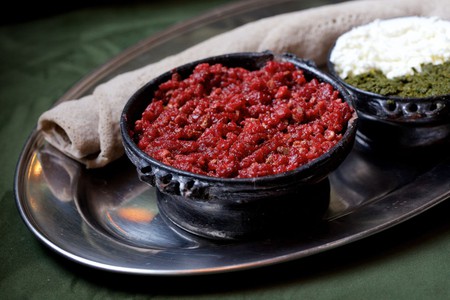 Kitfo is one of Ethiopia’s simplest dishes: lean cuts of ground beef, mixed with chilli and butter, warmed through ever so slightly.

The quality of the meat is the key to good kitfo: the cows used are strictly grass-fed, which makes the beef super tender and soft. When done right, it should pretty much dissolve on the tongue, à la steak tartare. It’s usually served with ayib, a soft creamy cheese, and sautéed greens.

Most people view it as a dish for special occasions, and it’s widely eaten on Orthodox Easter Sunday after 55 long days of fasting. In bigger cities, like Addis and Mekelle, it’s found year-round in special restaurants known as kitfo houses, where it’s the only thing on the menu. 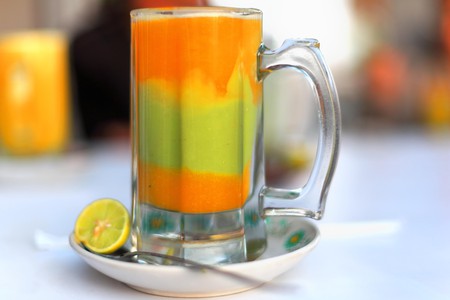 Oranges and mangoes stacked in pyramids, crates of fresh, fist-sized avocados, bunch after bunch of dangling bananas – it’s hard to miss Ethiopia’s street-side juice bars. Stop by for a vitamin hit when you just can’t take any more coffee.

Unlike smoothies, the fruits are blended individually and dolloped on top of one another in thick, unmixed layers. A blast of fresh lime juice is usually squirted over the top. Nothing extra is added, although some juice bars may offer an added spoonful of sugar: Ethiopia has a notorious sweet tooth. Go for one or two fruits – just take your pick from the colourful bounty on offer. Avocado and lime is a winner. 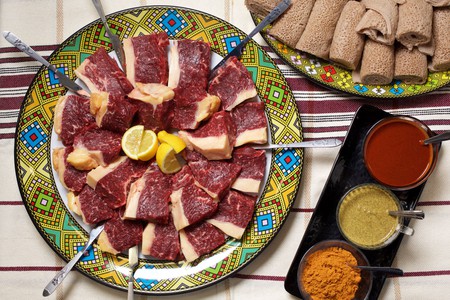 Tere siga means raw meat in Amharic – and that’s pretty much all there is to it.

Served in long, fleshy strips, usually of beef, it’s a communal meal, often shared among two or three people. Unlike most other Ethiopian cuisine, tere siga comes with cutlery: a large knife is used to slice away big hunks of meat.

The ritual of the cutting, known as q’wirt, is a big part of tere siga, and, like other Ethiopian meat dishes, it’s usually reserved for the most important of celebrations. As always, it’s eaten with injera.

Be aware that with all uncooked meat, there’s an added risk of illness, most notably, tape worms and salmonella. Falling sick is unlikely, but it can happen. 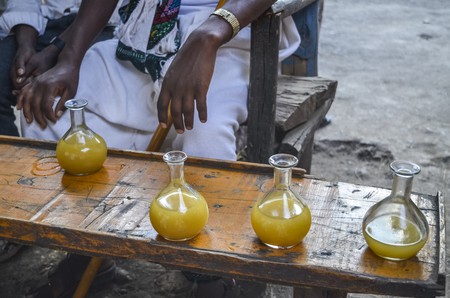 Ethiopia’s distinctive honey wine packs a punch. More like a mead, its fermented honey is strong in flavour, with a sweet-malty taste. Often a home brew, tej can vary in strength, usually on the potent side. There’s a slight beery edge owing to a type of hop leaf used in the brewing.

Served in equally distinctive bottles called bereles, these small glass beakers give off a hint of middle school biology nostalgia. From roadside shacks to high-end restaurants, you can find it all over Addis Ababa, but Fendika, known for its lively traditional music shows, is a city-wide favourite.

This is an updated version of a story created by Sian Atkins.