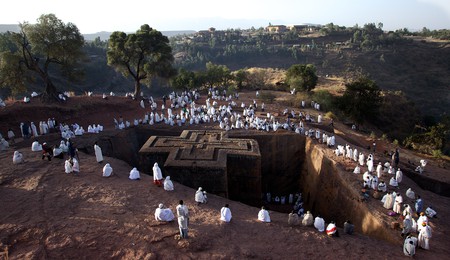 Lalibela is one of the holiest places in the world, let alone East Africa. | © Nathan Harrison / Alamy Stock Photo

A remote town in northern Ethiopia’s soaring highlands, few places evoke mystery and wonder quite like Lalibela. From its legendary rock-hewn churches to its epic pilgrimage, Culture Trip explores one of East Africa’s holiest sites.

Eleven churches lie at the heart of what makes Lalibela so fascinating. A warren of living shrines cut deep into solid stone, these remarkable structures have remained in constant use since their construction in the 12th century. 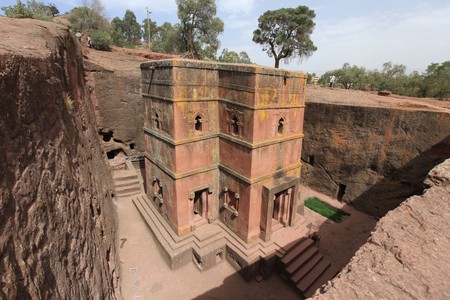 One of the famous churches of Lalibela, Ethiopia, hewn from the rocks. This one is Bet Giyorgis, or the Church of Saint George | | © Feije Riemersma / Alamy Stock Photo

The churches were built by King Lalibela, supposedly as a “New Jerusalem” for Ethiopian Orthodox Christians. At the time, the original Jerusalem and its surrounds had fallen to Muslim conquest, making the 2,100-plus mile (approx. 3,500-kilometre) pilgrimage all but impossible. Spurred on by a heavenly vision, the king set out to bring the holy land closer to home.

“From Lalibela’s time, until now, people go to Jerusalem for pilgrimage. In former times, people would make the pilgrimage by crossing Muslim lands – Egypt and the Red Sea – and it took a very long time. King Lalibela saw that the people suffered because of this. When he started to build the churches, he did so to symbolise various places in Jerusalem,” says Wondale Demssie, a priest from Lalibela.

Religious iconography is steeped into the complex at every turn, but it’s not always easy to spot. “The northern cluster of churches symbolises earthly Jerusalem and the southern cluster is heavenly Jerusalem,” says Wondale. Divided by the Jordan River, the complex is split into two main clusters, with five in the north, five in the south, and one, Bet Giyorgis, set alone from the rest.

Many of the buildings have a direct link to Jerusalem. For example, three unused graves – for Abraham, Isaac and Jacob – sit beside Bet Medhane Alem, the largest of the churches. Even the way the churches are laid out is symbolic, and Bet Giyorgis is shaped like a Coptic cross, which can only be seen from above.

How the churches of Lalibela were built

The churches of Lalibela were built from the top down, chipped and carved from the earth with simple hand-held tools. Perhaps even more impressive, each one is monolithic – made from one solid piece of rock – with doors, windows, internal pillars and internal staircases hollowed out from the same rust-red, volcanic stone.

Four of the churches are self-standing, cut away from the surrounding rock entirely. The other seven remain partially connected to the earth, built into caves or natural overhangs. A series of trenches, ceremonial passages and tunnels connect the churches, allowing followers to move between them easily in prayer. 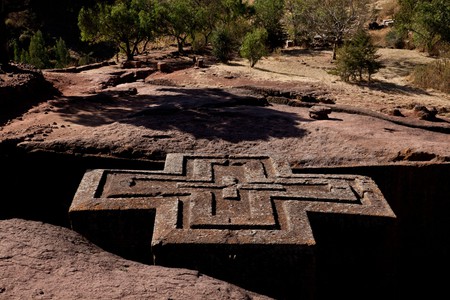 Bet Giyorgis church, like all the others in Lalibela, was carved from the top down | | © GRANT ROONEY PREMIUM / Alamy Stock Photo

According to legend, King Lalibela achieved this remarkable feat in just 23 years – albeit aided by a few godly helpers. As night fell, a troop of handy angels would descend from heaven to continue construction, or so the story goes. But due to their staggering complexity and artistry, it’s likely the churches took much longer to complete.

“There remains a huge amount of mystery in any historical and scientific understanding into the phenomenon of Lalibela,” explains Dr Ralph Lee, senior teaching fellow in World Christianity, SOAS University of London. He points to the research of archaeologist David Phillipson, an expert on Lalibela, who argues that construction probably lasted several hundred years, as opposed to a quarter of a century.

“The churches are very important in the Orthodox Christian identity of Ethiopia. People are very proud of them as a feat of engineering and art. Symbolically to many Ethiopians, it’s a picture of Jerusalem. So it’s a place that often people will go on pilgrimage to throughout the year,” says Lee.

The largest single pilgrimage takes place in early January, during the Orthodox Christmas period. From far and wide, the devout arrive in their thousands, wrapped in white robes, bearing gifts of incense, beeswax candles, donations – anything they can afford. Some will walk for hundreds of miles, trekking up into the barren highlands of northern Ethiopia, to reach the holy site, such is its importance.

During the celebration, Lalibela’s modest population of around 18,000 can explode to over 200,000 people. “They [the pilgrims] are coming to Lalibela because they consider it the second Jerusalem. It has high spiritual value for the local people – it is a part of the covenant, or the promised land,” explains Wondale. 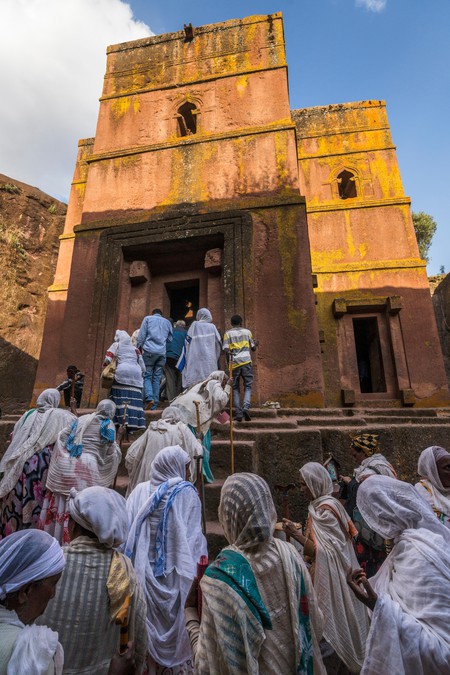 The celebration is twofold, with the annual feast of Saint Lalibela falling on the same day as Christmas (7 January), one of the holiest days in the Orthodox calendar. “The focus in Lalibela is as much on Saint Lalibela as it is on the birth of Christ. It’s very important,” says Lee. In total, the celebration can last for up to two weeks.

The pilgrims will typically arrive a week in advance of Christmas day, and stay for another week after. During this period, the church complex transforms into a hive of activity, as the pilgrims attend mass, prayer sessions and modest feasts. In fact, some will rarely leave the compound. “Around Christmas time, a lot of people may just sleep outside around the churches. People will stay around them until the celebration finishes,” says Lee.

Lalibela is around 422mi (680km) north of capital Addis Ababa in Ethiopia’s mountainous Amhara Region. Remote and difficult to reach, the town sits at an altitude of 2,600 metres (8,530 feet), sprawled over a series of hills and sheltered by the raw plateaus of the Lasta mountain range.

“Pilgrimages are a very important aspect of Orthodox Christians’ religious devotion; there’s a strong sense that pilgrimage should be hard work, that you’re going on a difficult journey in order to receive a blessing. It’s all seen as part of the process of receiving a blessing – that you go through hardship. The inaccessibility of Lalibela almost adds to that,” concludes Lee.