Live With the Locals in the Ethiopian Highlands 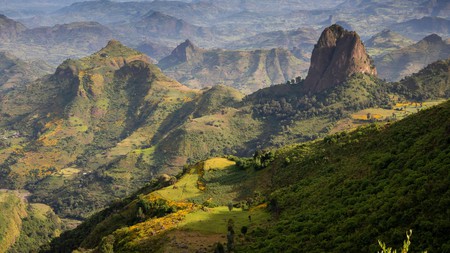 In northern Ethiopia, rural communities are hosting travellers through special tourism projects. A vast mountainous wilderness of ridges and plateaus, this region is home to the country’s highland people. Rural families earn their living through subsistence agriculture, much as they have done for centuries, tilling the land with oxen and working it by hand. But over the last decade, tourism has become increasingly important to their way of life. 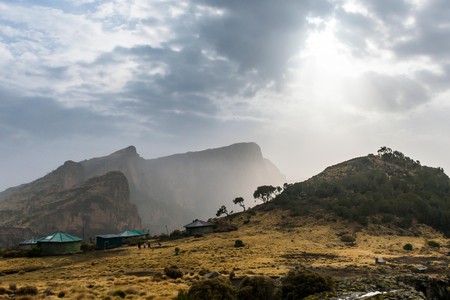 Mulu looks out over the valley, a deep gorge between two rocky plateaus. Far below, his son watches over the family livestock, grazing on a patch of grass. A group of people in bright robes of purple, blue and yellow make their way across the field before him. “Funeral,” he explains, leading the way back to his home.

From the Lasta Mountains, Lalibela looks small. A crowd of metallic roofs huddled over a series of hills. Its busy streets are a world away from the quiet of the highlands. The town is one of Ethiopia’s most popular stops, with its remarkable rock-hewn churches drawing thousands of travellers each year. Yet, few venture into the rural plains above Lalibela.

Back at the house, Mulu’s wife, Maryam, is preparing coffee. A small spouted pot, a jebena, is perched between four stone blocks at the centre of a fire. The coffee ceremony is an important gesture of respect in Ethiopia. A drink between friends who regularly stop by to exchange gossip. Over an hour, three cups of strong coffee is served in small cups.

Mulu has been welcoming travellers into his home for around two years through a local community trekking project, an initiative that aims to spread tourism to remote villages in northern Ethiopia. Visitors hike through the region’s staggering mountain landscapes, staying with local families, either in homestays or small lodges built, maintained and run by the community. It offers a unique view of highland life for Ethiopians; for Mulu, it’s a valuable source of extra income. 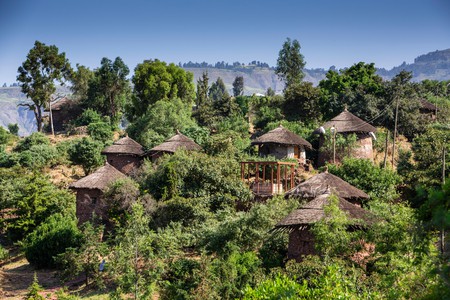 The money he earns is put back into the family farm. As well as livestock, Mulu has a small patch of land on which he grows wheat, wild spinach and beans. Half the crops are used by the family; the other half is traded in Lalibela, which is a four-hour walk away. Mulu explains that life can be hard, and one failed crop is disastrous, so money earned from hosting travellers is essential.

Mulu’s wife and their three children live in a thatch hut plastered with mud and cow dung. Inside, there is one room with a fire pit, and a small mezzanine on one side.

The family sleep on the mezzanine, while their livestock – an ox, a cow and her calf, five sheep, a donkey, a mule, six chickens and a dog – are all herded into the small paddock each night. The clever design feature keeps the animals safe from predators.

After coffee, Maryam prepares the injera, a flatbread commonly found in Ethiopian cuisine. Adding water to teff flour, a cereal grown across the country, she kneads the dough relentlessly. Served with a curry-like chickpea stew called shiro, injera is the mainstay of Ethiopian food. After working the mixture for close to three hours, it’s set aside to ferment for five days. 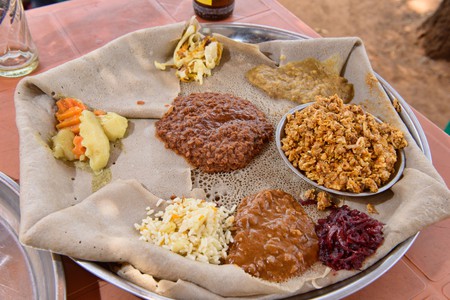 Mulu’s family is one of seven currently working with Highland Eco Trekking, a Lalibela-based tour agency that offers community trekking. Daniel Melese, the company’s founder, started around nine years ago because of concerns over food scarcity in rural Ethiopia.

“Since I am from the highland community, the food shortage worries me. What the farmers grow on their small piece of land is not enough to feed the family all year long. That’s why I started the community-based trek, so that the community can get money from tourism and buy food when the farm is finished,” he says.

The history of community trekking in Ethiopia

Community tourism has been present in Ethiopia since the late ’90s, when Mark Chapman, founder of Tesfa Tours, saw an opportunity to promote the country’s rich cultural heritage in a way that benefitted some of its most remote communities.

Chapman, who has lived in Ethiopia since 1997, had been working on a livelihood development programme in the Wollo region surrounding Lalibela. Originally, he set up Tesfa as an NGO before switching to the private sector in 2010.

Today, some 20 communities across Lalibela and Tigray, in the far north, are now involved in the project through Tesfa. “We work with a community for 70-300 households depending on where it is. They will end up coming together to form a cooperative to manage their guesthouse,” says Chapman.

“Each guesthouse has three rooms – mostly with two beds in each, often a double and single. We aim for a max of six people – but sometimes can go up to eight when there are families and kids staying.”

Crucially, the tours are not awarded on a hand-out basis. Trekking itineraries are carefully put together in areas where tourism can thrive. Once this has been decided, the local people are approached about their potential involvement.

“First, we identify the likely potential locations where tourists would enjoy trekking. Then we identify the community around the area, and we have meetings with the community and look to get their complete support to move ahead. While we have raised funds from donors, the community needs to put its share of labour and local materials into the construction of the guesthouses,” he explains. 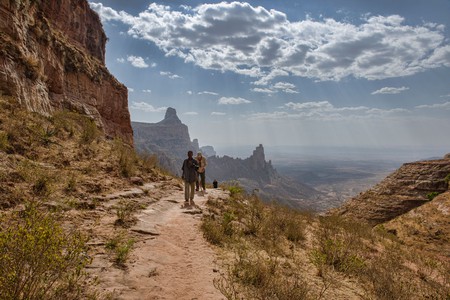 What to expect from a community trek

Trekking in Ethiopia’s northern highlands is tough, with long, sometimes punishing ascents at altitude. A good level of fitness and sturdy walking boots are essential. Walking poles are also recommended but not a necessity. Accommodation is basic but comfortable – don’t expect electricity and running water: creature comforts are not the point. It’s about the humbling hospitality of the hosts that really make this experience so special. Trekking holidays with a community element can be arranged by Tesfa Tours and Highland Eco Trekking, among others.

For more information on how to stay with a local family in the rural highlands of Ethiopia, visit Daniel Melese’s company Highland Eco Trekking or Mark Chapman’s Tesfa Tours.