Ali Birra is a living Oromo legend — singer, composer, and poet. In 2013, he celebrates 50 years on the music scene of his native Ethiopia. He has sacrificed much for his music; a nationalist and supporter of Oromo music, he has been imprisoned countless times and, also, wrongfully reported dead on more than one occasion, as Andreas Hansen reports. 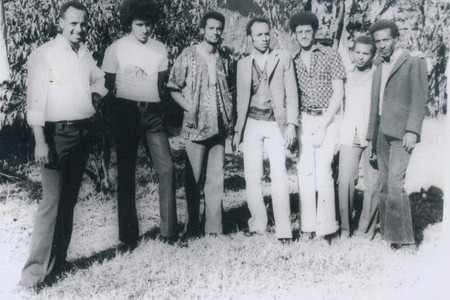 Ali (standing in the middle) and his band mates in Jimma, Western Ethiopia, 1973 | Courtesy ADDIS RUMBLE

During his career, Ali has not only been jailed dozens of times; he has also been reported dead more than once. First in the mid-70s, when the authorities in his home town of Dire Dawa told Ali’s father to travel to Addis Ababa to collect the corpse of his son. He found Ali asleep in the hotel, rather hungover from the previous night’s performance, but still very much alive. In the past decade, the rumours of Ali’s death surfaced again and in 2009 he was announced dead on Wikipedia. In late 2012 in Addis Ababa, Andreas Hansen met Ali – still alive and thriving – who told him that the untimely obituaries and imprisonments are the price he has had to pay for playing Oromo music and promoting Oromo culture.

The past decade has seen an implausible but well-deserved rediscovery of the astonishing Ethiopian music of the 1960’s and 1970’s. However, the majority of the attention has been given to Amharic music from Addis. One important legacy that has until now been left largely untold is the music of the Oromos; the largest ethnic group of Ethiopia at around 30 million people.

For several decades from the mid-60s and onwards, Ali Birra was the most prominent representative of modern Oromo music. He was part of a golden generation of Ethiopian musicians, performing with the greatest artists and orchestras of the time; but being Oromo he was always an outsider in relation to the Amharic musicians of his time. Yet for many Oromos, he was a hero, fighting their cause at a time where the promotion of Oromo culture was illegal and singing in Oromo language banned.

Half A Century On

Ali Birra left Ethiopia in 1984 and has since been back only sporadically, but he has not been forgotten. Heading for lunch we tried in vain to find a restaurant where devoted fans would not overwhelm Ali. Throughout the day his phone was continually ringing with new and old friends checking in, and while driving around Addis with Ali, we were met by a continuous honking and passengers shouting, ’we love you Ali’ through the car windows. This was Addis 2012 but felt more like driving around with Fela Kuti in Lagos in the 70s. 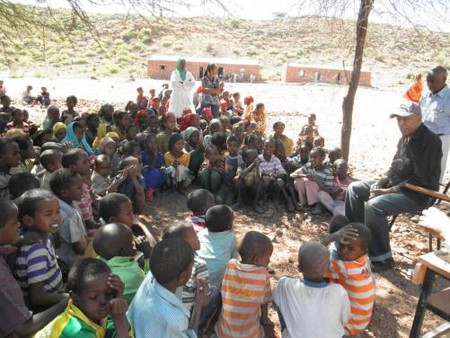 Ali has returned home to Ethiopia to launch his own NGO, the Birra Children’s Education Fund. He wants to give something back to Ethiopia and has started support programmes for children in one school in Dire Dawa and one in Galamso in West Hararge. ‘My father always told me that educated people know how to fight for their rights and to respect the rights of others,’ Ali explains. He now hopes to expand the programme to other schools around the country. He has also come back to Ethiopia for musical reasons. In 2013, Ali is celebrating his 50-year anniversary on the music scene and he is planning to commemorate this landmark with concerts in Addis and at home turf in Dire Dawa, as well as with the release of one final record before retiring.

‘I was lucky to be singer at a time with few Oromo singers around. I got the chance to influence people and their thinking. To be a teacher. To engrave my thoughts in people’s minds. The young Oromo musicians now are tough but they have not achieved this yet,’ Ali tells me. And things certainly were tough in Dire Dawa in the early 60s, when Ali aged 14 formed his first band Hiriyaa Jaalalaa, and soon after started performing with the group Afran Qallo. Being an Oromo musician back then was risky business. Singing in Oromifa was illegal, and the band members handed out their records to people on the streets as no Oromo music was allowed on the radio. ‘We were very young and courageous at that time,’ Ali admits. 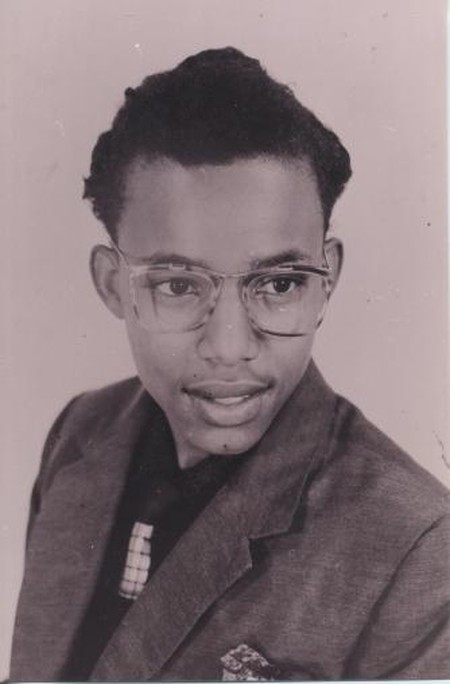 It was at a concert with Afran Qallo that Ali earned himself his stage name – Birra meaning ‘spring’ or ‘break of dawn’ in Oromifa – through the singing of the ’Birra dha Barihe’ song. In 1964, the group was invited to play in neighbouring Djibouti, but the 11 band members were denied permission to leave Ethiopia and had their instruments destroyed. They decided to split in smaller fractions and travel anyway, but when Ali arrived in Djibouti, he was arrested and detained for a month. On New Year’s Eve of 1964, Ali and three of his band members returned to Ethiopia and the next day were again arrested. Ali, now 16, spent six months in prison, jailed for singing in his own language and celebrating his culture. ‘I still remember it vividly. From that time on I knew that I wanted to fight for the rights of my people,’ he recounts.

After his release Ali was still detained on numerous occasions, sometimes for weeks, sometimes for months, until he in 1966 left Dire Dawa for Addis. But although he left Oromia and 20 years later left Ethiopia, Ali has never stopped being a strong and outspoken Oromo advocate.

While there are many talented young Oromo musicians out there, none of them have carved out a sound as unique as the one that characterises many of Ali’s recordings from the 60s and 70s. This was a sound crafted under rather peculiar circumstances. In 1966, when Ali Birra went to an audition for Emperor Haile Selassie’s Imperial Bodyguard Band, he was asked if he played any instruments, and replied that he played the oud. As they did not have one he was given a guitar, which he tuned like an oud. Thus, the inimitable Ali Birra sound was born. 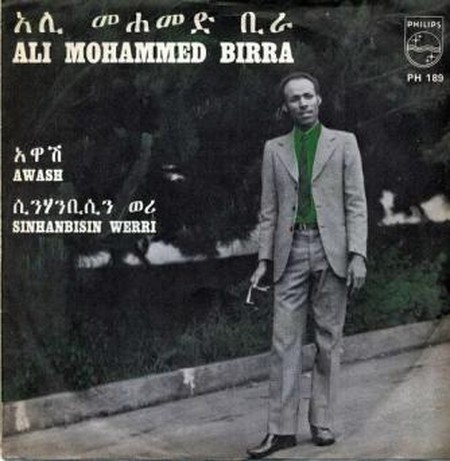 He has since tried to remain true to that sound. When I ask him about his musical philosophy, he explains: ‘I believe in small incremental changes to my music while staying faithful to its origins. I have tried to use new technological means while respecting the past. When I left Ethiopia, I was lucky to get the chance to study music in the US. It made me able to better analyse music and its scales. At the same time I can play many different instruments. Many new musicians today are only vocalists or they can only play one instrument.’

Stories From The Palace

Ali is full of anecdotes. Some of the finest ones originate in his three-year spell with the Imperial Bodyguard Band. Ali confesses that he enjoyed the prestige and fame related to the orchestra, but being a young and idealistic Oromo musician in the Emperor’s band also posed many challenges for Ali. One of the first times Ali clashed with palace protocol was during an official visit by the Romanian President. When the Emperor and his visitor strolled by the Band in the palace’s hallway, all the band members were supposed to bow and lie down on the ground. However, Ali was not aware of this etiquette, and stood staring straight into the eyes of the Emperor. Ali was then taken to jail, but when asked about his misstep, he told his superiors that as a Muslim he was not allowed to bow for any human being. 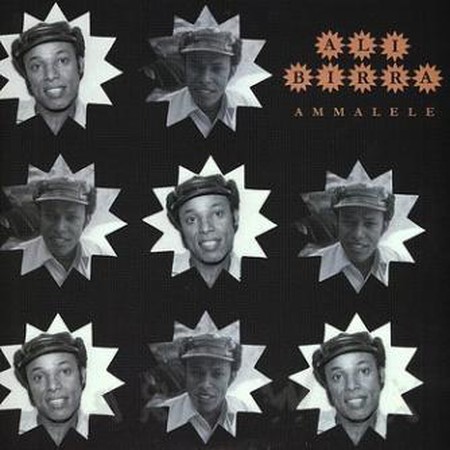 Ali admits that he was naïve back then: ‘There were so many cultural differences between life in Dire Dawa and in Addis and I did not speak Amharic very well.’ In 1969, Ali finally quit the Imperial Bodyguard Band and for a few years he quit music as well. He worked as a water machine operator on the railway between Ethiopia and Djibouti until he in 1972 returned to Addis and to music.

Ali’s second stint as musician in Addis proved to be more successful than his time in the Emperor’s band. He started performing again in Addis and touring throughout Ethiopia.

Nevertheless, Ali also had his difficulties this time around: ‘When I joined the Ibex Band, I was disarmed my guitar. I was told that my guitar style did not match their vocal so I was left with singing together with Mahmoud Ahmed. At least, this gave me a bit more freedom to be a performer.’ Some of the more serious artistic restrictions came from the Derg regime. ‘There was a lot of censorship during public concerts and the majority of the songs we recorded had to include some praise of socialism, Marxism or Leninism,’ he elaborates. 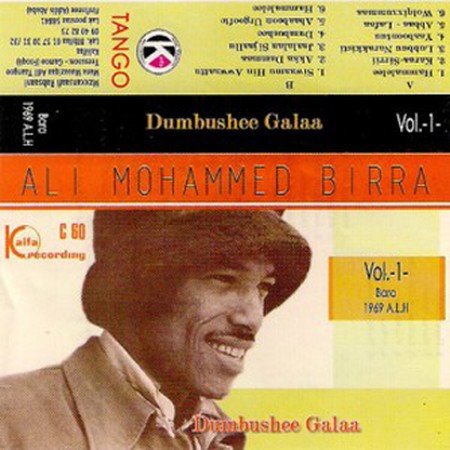 In 1984 Ali left Ethiopia. A few years earlier, he had met and married a diplomat named Brigitta Alstrom, who was working at the Swedish Embassy. When her posting in Ethiopia ended, she was transferred to Los Angeles and Ali decided to follow his wife to the US. ‘My motivations for leaving Ethiopia were mixed. I wanted to be with my wife, to escape the harassment of the regime and to explore new opportunities abroad,’ he tells me. In the US, Ali studied music theory at the university and used most weekends touring the US and Canada with fellow Ethiopian diaspora musicians. Diplomatic life later brought Ali to Saudi Arabia and Sweden, and he continued to perform and record music throughout this period. He now resides in Canada with his wife Lily.

Before I part ways with Ali, I ask him to reflect over the biggest rewards during his 50 years in music. His replies promptly: ‘The biggest victory for my music and for me is that people after so many years still have an interest in it. Even people from outside Ethiopia. But it also goes beyond the music. Oromo music is much more than music. It is a struggle and a freedom fight.’