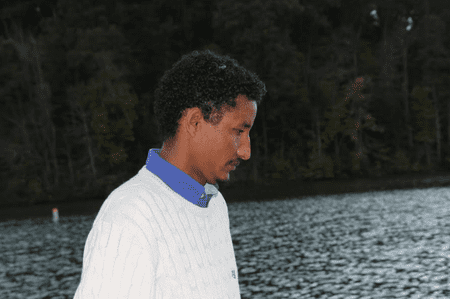 We spoke with the journalist, fiction writer and PEN Eritrea executive director about the situation his country faces and how he’s working to remedy it. Zere’s short story “The Flagellates” appears as part of our Global Anthology.

In June of this year, a coalition of human rights lawyers, activists and institutions submitted a joint letter to the UN, urging them to reinstate an investigator to its member nation of Eritrea. Officially termed a special rapporteur, this investigator, along with the UN’s Commission of Human Rights, had found that during its two-year monitorship June 2014–July 2016, the Eritrean government, under the rule of President Isaias Afwerki, had repeatedly violated many fundamental rights of its citizens. The country’s political turmoil is so bad that it has earned the nickname “The North Korea of Africa,” the Asian country being the only one to rank below Eritrea in the World Press Freedom Index. “In view of the ongoing crimes under international law, including torture, enslavement and enforced disappearances, and violations of fundamental freedoms committed in Eritrea,” wrote the coalition, “the Special Rapporteur’s mandate… has been instrumental in monitoring the dire situation on the ground, highlighting on-going violations and the failure to implement the recommendations of the CoI and in providing a crucial platform to help amplify the voices and concerns of victims.”

Among the signees was the Eritrean office of the literary and free speech advocacy institution PEN. Its executive director, the journalist and writer Abraham Tesfalul Zere, has been a key figure in promoting awareness of the atrocities under Afwerki, who has been in power since Eritrea declared independence from Ethiopia in 1993. PEN Eritrea comprises exiled writers and journalists scattered throughout the world; three of its active members are based in Ohio, where Zere went after escaping the country, and where he is able to safely document the regime’s ongoing crimes for a number of English-language periodicals, including the The Guardian, The New Yorker, the Independent, Al Jazeera, and the Index on Censorship magazine. Other Eritrean journalists are not so lucky. According to Amnesty International, also a signee of the letter, more than 10,000 people have been imprisoned for political crimes alone, a sizeable number of whom are journalists like Zere.

As a fiction writer, Zere’s expatriation has also allowed him to fine-tune a particularly poignant style of satire, and his story “The Flagellates,” which we have published exclusively as part of our Global Anthology, is exemplary. Set in one of Eritrea’s infamous underground prisons, where torture and cruelty are commonplace, “The Flagellates” concerns a new “benevolent” prison commander, who attempts to have a civil discussion with the inmates on how they should be issued their requisite lashes. “While it is not within my power to outright abolish the standard sentence of 15 corrective lashes,” says the new commander, “I can adjust how they are distributed. Instead of administering the lashes all at once, although this may be your preference, I think we can issue the floggings throughout the day: five in the morning, five in the afternoon and five in the evening. How do you see this? Any comments?”

We spoke with Zere about his work with PEN Eritrea, how some of his countrymen are keeping Eritrean literature alive abroad, and his own personal story of leaving his homeland.

“The Flagellates” is a satire set in a detention center, where its prisoners debate with the commander about the distribution of their requisite lashings. Could you talk about the basis and realities that this satire is commenting on?

Fiction pales in comparison to the reality of present-day Eritrea. There are over 360 prison facilities (majority underground detention centers run or owned by military commanders who extort money for plea bargains) in this small nation of less than five million people. One way or another, an average Eritrean has served time in these detention centers (myself in a labor camp). The degree of dehumanization and brutality many prisoners of conscience experience is difficult to fathom. George Orwell’s 1984 and Franz Kafka’s The Trial read not as allegorical stories of a dystopian world, but as slightly embellished accounts of life in Eritrea itself. Personal stories of the prison facilities vary—I’ve heard of people who were forced to eat with defecation-tainted utensils; to others who served for years in solitary confinement because of mistaken identity, with even the guards freely admitting that they were detaining the wrong person. I’ve also heard of some workers who were imprisoned under harsh conditions because the jailers want to extract information regarding their bosses, men who would themselves never be indicted. I wrote “The Flagellates” having all such stories as a backdrop. A straight, realist story couldn’t grasp the scale of such bizarre reality, so I had to be just as bizarre with my imagination; I remember even bursting into loud laughter while writing it in a coffee shop.

This story has as its subtitle “A true fictional account” and I’m wondering if you could discuss the nuance of this phrase as it pertains to your narrative.

I put that in to create ambiguity; the narrator is also named Abraham for the same reason. Overall, I weave between fiction and reality, as it is difficult in an Eritrean context to discern between the two, particularly in the detention centers. For example, when this story (in its original Tigrinya) was published in a blog, one Eritrean wrote me expressing the “fury he felt reading about this experience as if it were my own,” and even suggested that I report it to the UN Commission of Inquiry on Human Rights in Eritrea. On a different reading, this example also shows such practices are normally expected in Eritrean prison centers. 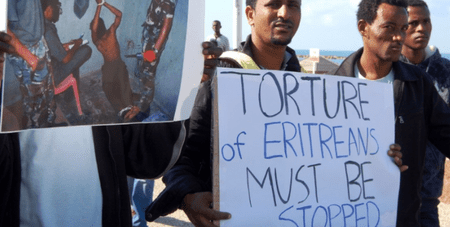 You wrote a piece for The Guardian detailing Eritrea as the country ranking third-worst in jailing its journalists (behind Iran and China), and in which you wrote, “If you don’t give them voice, no one will,” and described it not only as Africa’s North Korea, but worse. Do you see Eritrea as an internationally forgotten autocracy?

Because of its closed nature, the outside world has little idea how Eritrea has been ruled for the last 26 years under ‘President-for-Life’ Isaias Afwerki. In addition to the grim reality I have detailed in The Guardian, it is the country ranked last (No 180) for the last eight years in a row (2009–2016) on the Reporters Without Borders’ World Press Freedom Index. It is also the most censored country on Earth, ranking even below North Korea, according to the reports of Committee to Protect Journalists. Eritreans living inside the country are only left with one means of resistance—lack of cooperation. We have reached a stage where failure to unconditionally applaud the irrational acts of the regime is considered dissidence.

It is indeed forgotten or downplayed internationally—unlike, say, North Korea—because it does not pose an imminent threat to the established world order. Only recently did it start to get media attention because of the surge of refugees in Europe. Otherwise, I’ve always assumed it could perhaps be even worse than North Korea, because Eritreans are living in a most stifled atmosphere inside the country, while they are conscious of the outside world (possibly because the regime lacks the means of absolute control). What makes it worse than North Korea, in my view, is that it is also a country that has been steadily deteriorating at an incredible pace. Eritreans inside the country are not only denied all forms of freedom, but a minimum means of living.

As the executive director of PEN Eritrea (in exile) what are some of the missions and programs you are enacting to challenge this censorship and oppression? What successes have you had? And where are you currently based?

I am currently based in Athens, Ohio, where I’ve been since coming to the United States a few years ago. Before leaving the country, I was identified as national security threat by the former director of the Ministry of Information, Ali Abdu, who called me out directly in a letter published by the state-owned newspaper where I worked (though he did so under a pen name). I knew the system well enough to know I was walking on a tight-rope, as most of my friends had also been taken into custody for baseless accusations. Hence, I immediately tried all means to leave the country safely (which, in Eritrea, is almost impossible), but my requests to come and study in the US were repeatedly denied by the office of the President. Finally, I was able to pull some strings to get permission to go on a study trip to South Africa in 2012, which is where I departed for the US. I haven’t been back to Eritrea since. Somewhat ironically, Abdu himself later sought asylum in Australia.

I can confidently say PEN Eritrea, which was established in October 2014, has accomplished a lot in its brief existence, despite a lack of resources and a scattering of its active members. Since we lack the means to legally represent anyone, most of the journalists we’ve logged are under misspelled names. The consequence of this is that it has rendered our records inaccurate, which is something we are working to remedy. Thanks to our promotion, some of these forgotten journalists started to assume their proper place, such as Idris “Aba-Arre” Said, Dawit Isaak, and Amanuel Asrat who won the Oxfam Novib/PEN Awards for Freedom of Expression in 2016. All three were honored with empty chairs at the ICORN Network Meeting & PEN International WiPC Conference that took place in the city of Lillehammer (Norway) from May 31 to June 2, 2017.

PEN Eritrea at large and myself are challenging state censorship and oppression simply by putting facts in order. Dictators thrive on spreading misinformation, and hence accuracy with numbers, names, and personal accounts unsettles them. In line with our bigger mission, I have also been writing for different media outlets, mainly on Eritrea’s gross abuses of human rights and friidom (to use a disfigured variant of the word) of expression. 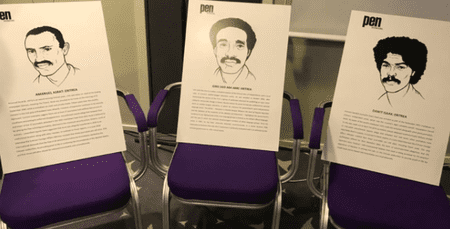 Eritrean writers Amanuel Asrat, Idris “Aba-Arre” Said, and Dawit Isaak being honored with empty chairs at ICORN Network Meeting & PEN International WiPC Conference that took place in the city of Lillehammer (Norway) from 31 May to 2 June 2017

There are many great writers who remain local because the majority write in their mother-tongues, mainly Tigrinya and Arabic. For example the first Eritrean novel, by Gebreyesus Hailu, that was originally published in 1950, only attracted the due attention and readership recently when it was translated into English under the title The Conscript in 2012. Though he remains untranslated, Beyene Haile was a great novelist and playwright; as is Alemseged Tesfai. Ribka Sibhatu and Saba Kidane are also some of Eritrea’s finest women writers. Eritrean-British Sulaiman Addonia is another prominent writer who writes in English. Haji Jabir, who has published three novels in Arabic, is also another renowned Eritrean writer. The poet and performer Reesom Haile was also widely known and translated.