Umm Kulthum: The Voice Of Egypt

Umm Kulthum was Egypt’s best-beloved singer of the classical style and her voice transcended national boundaries. Her career paralleled Egypt’s shifting position in the world during the 20th century, from British colonial rule to independence. 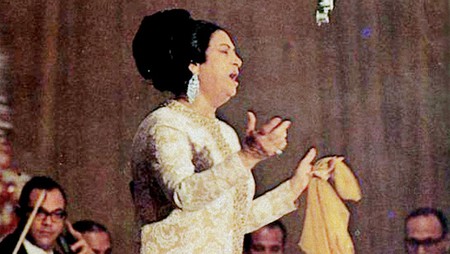 With her trademark sunglasses and scarf, Umm Kulthum remains amongst the most well-known and beloved of singers in the Arab world; to many, she was more than just an emotive and powerful voice. Her voice mesmerized both the highest echelons of society and the ordinary populace in the Arab world. Indeed, her concerts on the first Thursday of each month became a cultural institution wherein entire neighborhoods would tune in to collectively listen to her voice. As a testament to the power of her music, four million people turned out for her funeral in Cairo in 1975.

Whilst she sang solo for much of her career, she collaborated with a wide range of poets and musicians who composed works for her. Among her collaborators were the poets Ahmad Rami and Mahmud Bayram el-Tunsi, and composers Mohamed El-Qasabgi, Zakariya Ahmad, and Riad El-Sombati. In addition, her songs fused together both classical Egyptian music with more modern and popular styles to create a uniquely Egyptian take on contemporary music.

Part of Umm Kulthum’s huge appeal lay in the way in which she could interact with and improvise for her audiences. A single song could last for over an hour, as lines could be repeated and subtly varied for emotive effect. Her improvisation showed off both her creativity and her ability to build a rapport with the audience.

Umm Kulthum’s rise to stardom paralleled Egypt’s emergence as an independent political force after 70 years of British colonial rule. And for the generation that witnessed the Egyptian Revolution of 1952, Umm Kulthum embodied the optimistic hopes of a generation emboldened by the hope of pan-Arab nationalism under President Gamal Abdel Nasser.