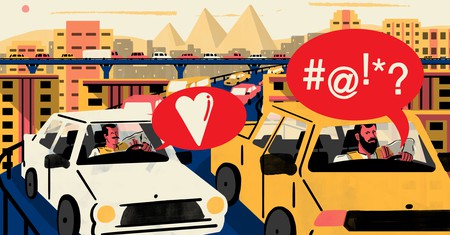 Car honks are the backing track to any trip to Cairo, but, here, they aren’t just a signal of exasperation. In Egypt’s largest, most chaotic city, car beeps are an adapted Morse code.

Drivers don’t say “thank you” in Arabic or “screw you” with a gesture. Drivers use a Morse-code-like system of car honks to communicate with peers behind the wheel. But, unlike a lot of the expletive-filled claxons in many big cities, most of Cairo’s car-honk language is actually suitable for print. 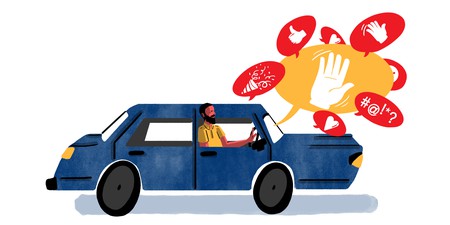 “’Thank you’ is the most common [honk] phrase used by men and women drivers,” says Abdallah Hussein, co-founder of female-ride-sharing app, Fyonka. “You use the car-honk language to make the commute easier. It’s like you’re talking to the person next to you without even looking at them.”

In Cairo’s car-honk language, “thank you” is a series of two short beeps. Two other commonly used phrases, “take care” (one long honk) and “I love you” (four short beeps followed by one long beep), are used to wish fellow drivers well. The latter, translated as bahebak in Arabic, is professional driver Ayman Kamel’s go-to.

“My favourite phrase, ‘I love you’, is used to calm down a potentially difficult situation,” says Kamel, who now owns and manages transportation for the immigrant services company We Know Egypt. “It’s also a way to thank someone for giving way.”

Other phrases like “congratulations” for newlyweds have been part of the car-honk language’s evolution over the past 20 years. According to Kamel, the language started in the late 1990s after Cairo’s population doubled. In 1947, Africa’s second largest city had 2.09 million residents. With immensely higher birth rates and significantly lower death rates, greater Cairo – which was named one of the world’s most overpopulated cities in 2017 – has a current population of 20 million.

“The population doubling had a massive impact on the number of road users,” Kamel says. “The language started when Cairo’s traffic got out of hand, and it’s used where traffic is the worst in Cairo and now up to Alexandria.”

Today, most drivers are at least partially fluent in Cairo’s car-honk language, Kamel says. Like many of his fellow professional drivers, Kamel learned the language in his local ahwa (coffee shop) – residents frequent these hole-in-the-wall (and often men-only) hangouts for the hospitality, the community and the dose of daily gossip.

“Egyptians are great storytellers,” says Kamel. According to him, the conversations and debates that take place at the wheel are retold by all those who gather for their evening shisha, tea and backgammon. 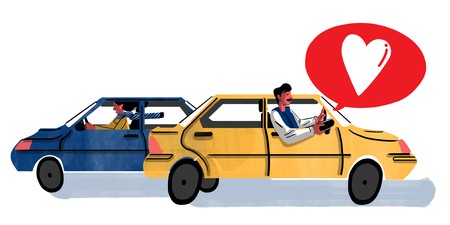 While Kamel says men and women are equally vocal on the road, car honking is a primarily male language. According to traditional custom, women are prohibited from riding in cars with unrelated men, which has meant that women can’t get their licences, as most driving instructors are male. Today, these gender norms are shifting.

Female-focused businesses like Direxiona, an online platform that connects Egyptian women with female driving instructors, are bringing gender diversity to the country’s chaotic streets. Direxiona instructors have helped thousands of women learn to drive since the platform’s launch in 2016. Unlike their male counterparts, though, Direxiona’s women instructors keep casual car honking out of their curriculum.

“We don’t see this as a serious topic,” says a spokesperson, who explains that Direxiona’s main concern is simply to use honks to draw attention to road safety issues: “We are keen to teach safe and professional driving.”

“Women do use the car-honk language in Cairo, but not nearly as much as men,” he says. “To put it into perspective, I’d say 20 percent of women use it compared to 80 percent of men.”

One woman, Cairo resident Laila Hassaballa, drives all over the city as part of her job as co-founder of food-tour company Bellies en Route. While she describes herself as a car-honk-language novice – and she actually prefers not to honk while driving – Hassaballa has enough word-of-mouth savvy to “eavesdrop” on the drivers around her.

“You have to hang out with certain, ‘more exposed,’ groups of people to learn about [the language’s] existence,” Hassaballa says, explaining that she was introduced to the language through a street-smart friend who knew all the different honk sequences. “It’s passed on from one driver to another. You won’t find any manuals for this one,” she adds. 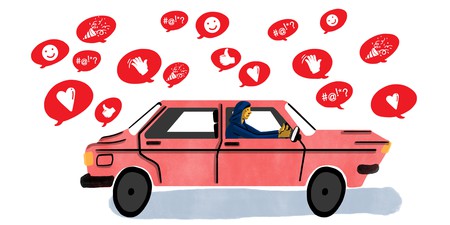 “I find it interesting that in our culture, we’ve come up with a way to curse someone without needing a single word or hand gesture, just a sequence of sounds that means ‘son of a bitch,’” she says.

To the untrained ear, a series of three short beeps followed by two long beeps is just ambient noise in the chaos of Cairo’s never-ending gridlocks, but this commonly used phrase – translated as “fuck you” – can rile up some wild road rage. Kamel has witnessed trucks deliberately drive into the back of vehicles that honked these choice insults.

While the car-honk language is still in its infancy, Hassaballa expects it to evolve in the future as Cairo’s ever-innovative drivers find ways to express themselves more creatively. Until then? It’s a battle for who can blare loudest.

“Many drivers, especially taxi drivers, install louder horns in their cars, and they also fit horns with unusual tones like emergency service tones, tones that sound as though the driver is constantly tapping on the horn, or tones that sound like loud bicycle bells,” Kamel says. “They’ll invest in anything that makes them stand out from the crowd!”