AFRICA
/
EGYPT
/
Things to Do

The Top Things to Do and See in Hurghada, Egypt 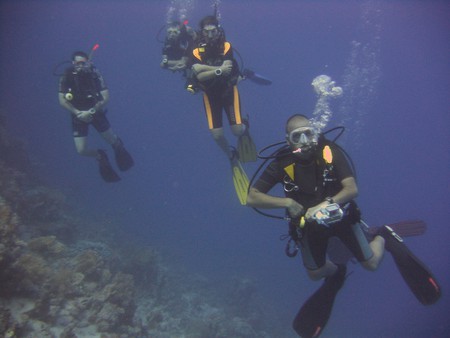 The city of Hurghada has year-round sunshine, white-sand beaches and plenty to do (or not do), whatever your bag and your budget. It’s got a killer location by the waters of the Red Sea, and, as a holidaying destination, it’s incomparable. Here are the best things you can do in Hurghada, the heavenly resort town in Egypt.

Go Diving in the Caves of the Careless Reef 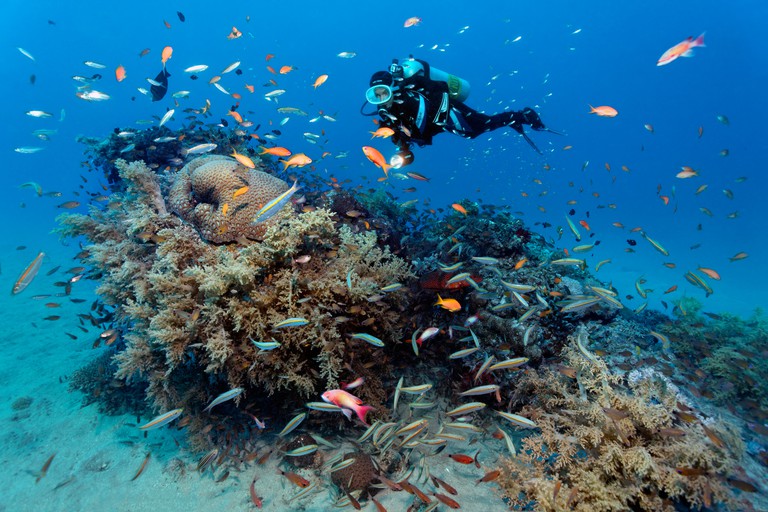 © Norbert Probst / imageBROKER / Alamy Stock Photo
The appeal of this dive site is self-explanatory: it is a technicolour vision of coral forests wriggling with fish – tuna, jacks and even the occasional hammerhead shark. It’s best known – and loved – among divers, for the large population of giant morays lurking in the depths. Two coral towers brushing the water surface delineate the reef, and the chasm between, about 16m (53ft) deep, is your playground. Whether you’re a professional or inexperienced diver, in these waters you’ll be in your element.

Mosque
Facebook
Email
Twitter
Pinterest
Copy link
Share
Map View
It’s dubbed the Big Mosque by all who know it, and it’s clear why: its impressive architecture stops passersby in their tracks. Its looks are classically and elegantly Islamic: the arches, domes and hallways are laced with delicate carvings, and the minarets can be seen from miles (kilometres) away. Every day, you’ll hear the call to prayer resonating from within the walls, drifting atmospherically over Hurghada – a reminder you’re in amazing Egypt.

Watch the sunset at the Hurghada Marina Boulevard 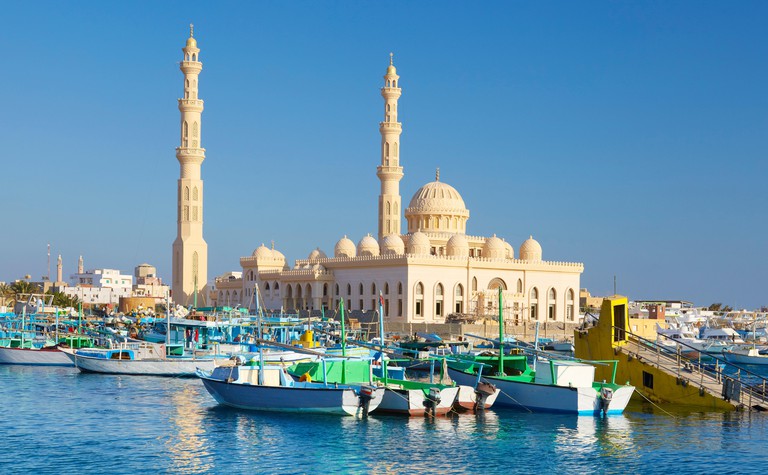 © Jan Wlodarczyk / Alamy Stock Photo
Evenings in Hurghada inevitably end with a stroll along the Marina Boulevard. Here, multi-million dollar yachts glint in the late light, floating on transparent waters. You’ll be among visitors from all around the world – and everyone is in awe of the setting. The Marina is an upmarket spot, but the last rays of the day won’t cost you a bean as you wander – so, you can keep your cash stashed for later and spend it at the bars, pubs and cafes. 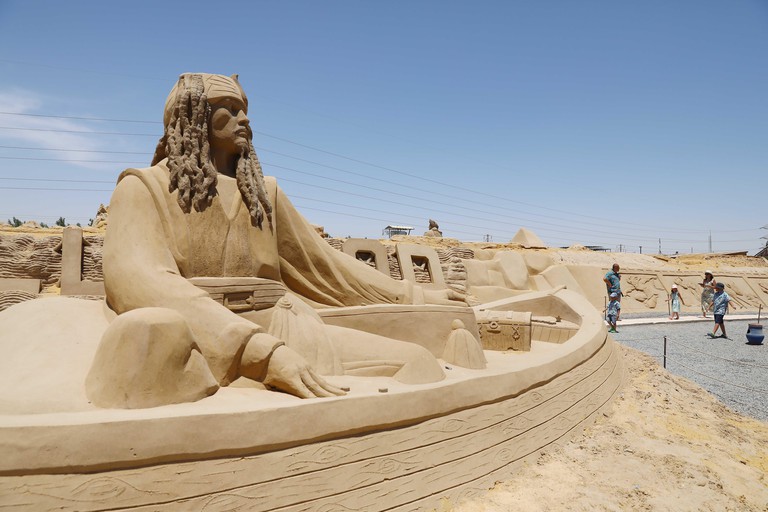 © Xinhua / Alamy Stock Photo
This open-air museum, just outside Hurghada centre, has two distinct concepts. One focus is on historical and mythological art, borne out in ancient sand sculptures that depict various stories and celebrated military leaders among legendary characters. Contrastingly, there’s Wonderland Art, a display of Walt Disney statues and figures from children’s stories. Compressed sand and water are used in the construction of each figure, which, once set, get finished with varnish. Your children can learn how to do this at the Magic Castle, while you take a breather at the coffee shop.

Learn to windsurf or kitesurf 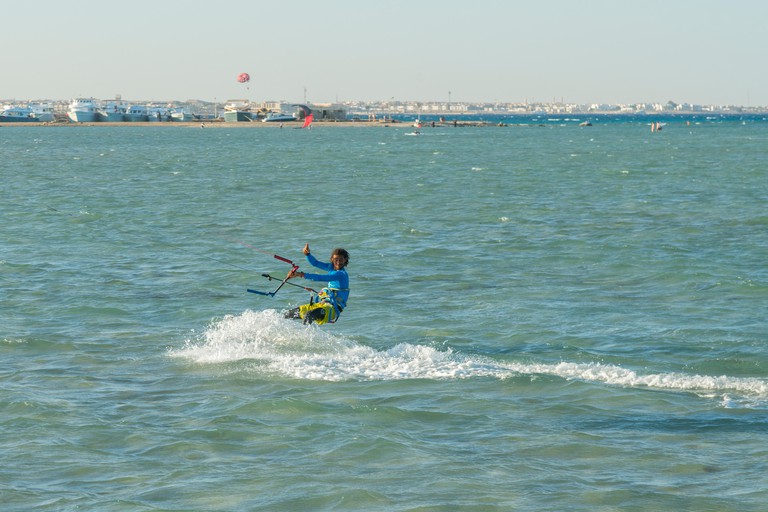 © Anton Petrychenko / Alamy Stock Photo
If you’re the type who can’t idle on holiday, wiggling your toes in the sand, try learning to windsurf or kitesurf for a breath of fresh air. Whichever activity you sign up for, Hurghada is one of the best locations in the world for beginners. Harry Nass Hurghada Windsurf & Kitesurf Center will soon have you up and running – it has direct access to shallow waters and, crucially, a standing area on the sandbanks of a small bay, where you learn to balance before taking the plunge. Instructors are professionally accredited, and safety equipment is all present.

Aquarium
Facebook
Email
Twitter
Pinterest
Copy link
Share
Map View
There’s something utterly transfixing about watching colourful shoals swarm in clear depths beyond clear panes. That’s the secret to the success of Hurghada Grand Aquarium, or the Red Sea in Glass as this one-million-gallon (4,546,090 litres) tank likes to call itself. It is home to an awesome 1,200 sub-aquatic species. They glide and twirl in a series of 24 galleries that depict various ecosystems. As well as sharks, highlights include turtles and elegantly flapping rays. For young ones, the hands-on petting experience of the “touch tank” will make their day.
Book Now

Explore the Monasteries of St Anthony and St Paul

The Monastery of St Anthony was founded by St Anthony’s disciples in the fourth century CE, just a short distance beneath the cave where he lived. When you visit it today, Deir Mar Antonios, as it’s also known, is an impressive sight. It is a high-walled complex with several churches, a bakery and a well-cultivated garden with shady trees, and it is the oldest functioning monastery in the world. The resident monks will guide you around the Church of St Anthony, which is the oldest part of the monastery and built over the saint’s tomb. The church contains one of the most significant collections of Coptic (Egyptian Christian) wall paintings in Egypt. Neighbouring St Paul’s is smaller and gets fewer visitors – but it is serene and holds more Coptic art.

Eat Bedouin food in the desert

Hurghada is a bustling resort town – and, sometimes, you’ll fancy an escape from the action. Heading out into the sands of the Egyptian Desert is a tranquil, atmospheric experience. Take a tour in a 4×4, which culminates in a sizzling barbecue prepared according to local Bedouin tradition. You’ll pass through arid plains and enter deeper into the hot wilderness, completing the last stretch on foot. You’ll meet Bedouin people in their ancestral territory before feasting on traditional barbecue dinner as the sun sets. 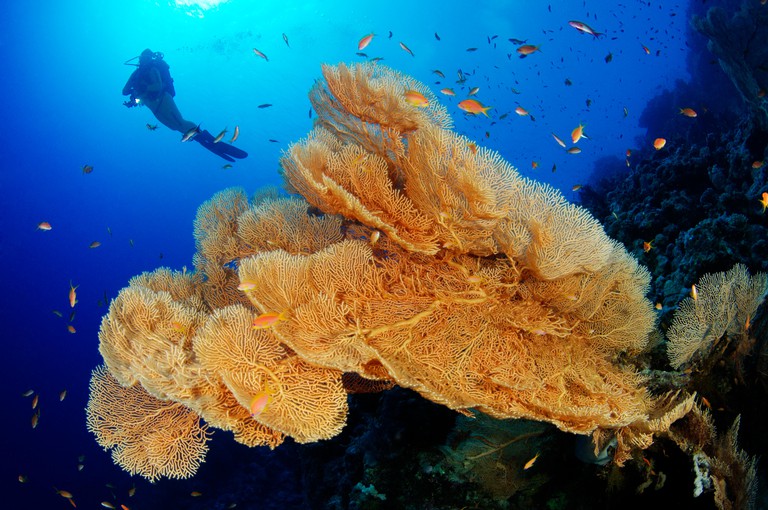 © Poelzer Wolfgang / Alamy Stock Photo
This is one of the best-loved boat excursions in Hurghada: head out east from Hurghada to the Giftun Islands to don snorkels and masks and explore. Part of a marine reserve, it teems with colourful marine life lighting up the clear waters, while endangered bird species flap overhead. Surrounding this biodiverse spot are a number of spectacular reefs, where intermediate to advanced scuba divers can get down deep with the wildlife. Alternatively, just flop under a palm-frond parasol on the white sand, and top up your tan.

We all love a yellow submarine – and, sure enough, Sindbad has its fleet in bright, sunshiney colours, whisking you down 22m (72ft). It’s a comfortable, dry way to observe the life aquatic. During the 50-minute underwater odyssey, you’ll see intricate, exuberant coral formations and rainbow-vivid tropical fish. Panoramic windows mean amateur Attenboroughs are guaranteed great shots and videos.