The Mysteries and Majesty of the Great Pyramid of Giza

The pyramids in Egypt are at the top of many people’s ultimate travel bucket list. The stone structures still stand proud, having outlasted the other Wonders of the Ancient World. Here’s a guide on what to expect when entering the deserts of Giza, Egypt’s third-largest city, to see the greatest pyramid of them all. 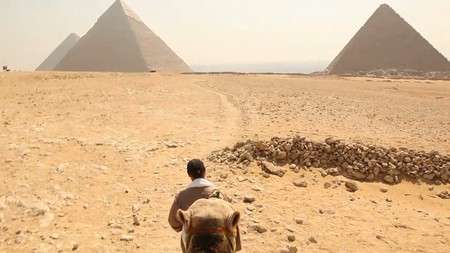 The pyramids of Giza are believed to be over 4,000 years old and remain one of the most popular tourist attractions in the world | © Culture Trip

Want to discover more about the pharaohs? Join TRIPS by Culture Trip’s epic 10-day adventure, led by a Local Insider.

The history of the Great Pyramid of Giza

The Great Pyramid of Giza is the largest and oldest of three structures in the city of Giza, on the outskirts of Cairo. Also known as Pyramid of Khufu or the Pyramid of Cheops, the Great Pyramid has been documented as a landmark to visit since it was first put on the list of Wonders of the Ancient World. The list in its final form wasn’t fully realised until the Renaissance, but even as far back as the 1st century BCE, Ancient Greek travellers spoke of the pyramid.

The pyramid is believed to encase the tomb and final resting place of Pharaoh Khufu, and was completed in 2560BCE. It stood at a height of 146.5m (481ft) and was the tallest built structure on earth for close to 3,800 years before being topped by Lincoln cathedral in 1311. The pyramid remains largely intact, although the same cannot be said of the cathedral, which lost its central spire in 1548.

The other structures in the Giza necropolis complex are the Pyramid of Khafre and the Pyramid of Menkaure. There are also smaller associated buildings, as well as the Great Sphinx of Giza.

How were the pyramids built?

Many theories have been proposed since the rediscovery of the tombs within the pyramids, but there isn’t one that experts can agree on. The Great Pyramid casing is made from an estimated 2.3m blocks of limestone. For the interior chambers, larger granite stones were used; these were transported from Aswan, which is 800km (500mi) away.

The Giza Complex lies west of the Nile River in a portion of the Sahara known as the Western Desert. The Nile was used to bring in materials and manpower from across Egypt and beyond. Some of the outer stones were loosened by an earthquake in 1356 and were used to build mosques in Cairo.

The Greeks believed that slaves were used to build the pyramids, but more recent discoveries of workers’ camps have led to theories that skilled workers were in fact enlisted for construction. There is evidence to suggest that the huge stones were rolled into place, but other experts think that raw materials were either dragged or even lifted into the structure. 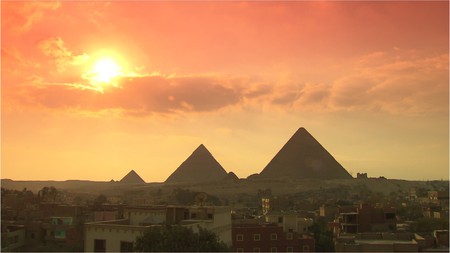 Can you go inside the pyramids?

If you fancy yourself as a budding Indiana Jones, the good news is that you can buy a ticket to enter any or all of the pyramids in Giza.

There is a general admission fee to enter the grounds around the pyramids, and then subsequent entrance fees for each of the pyramids themselves. It’s worth booking in advance if possible, as tickets on the day can be limited depending on restoration work that may be taking place in the complex. The best tip is to go for one of the organised tours that can take care of the booking side of things and leave you free to explore at your own leisure.

And yes, there are camel rides aplenty too.