The Grand Egyptian Museum: When Will it Open and What Will You See? 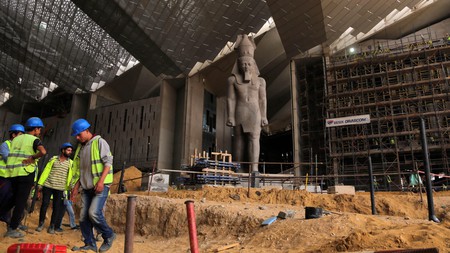 The highly anticipated Grand Egyptian Museum opening is due in summer 2022. Culture Trip shares what to expect – from ticket prices to the ground-breaking Tutankhamun collection.

The first murmurings of the long-awaited Grand Egyptian Museum began in 1992, with Irish architects Heneghan Peng assigned the job of bringing the idea to life in 2003. The aim is to devote the 50ha (123-acre) site entirely to Egyptology, making it the largest archaeological museum in the world. On top of that, it will house the largest collection of Tutankhamun relics ever displayed. Due to several delays in the construction, the museum price tag is around $1bn. Read on to discover what to expect from this extraordinary museum when it finally opens.

Looking for an all-encompassing tour of Egypt and its greatest sites? Book yourself onto our specially curated 10-day adventure that includes a cruise down the Nile, a guided visit to the Grand Egyptian Museum and the architectural wonders of Cairo.

When is the Grand Egyptian Museum due to open?

To say the Grand Egyptian Museum opening has been a long time coming is probably the biggest understatement since the pharaohs ruled the Nile. It was first scheduled to open in 2015, a decade after work began. In January 2020, it was reported that 94.5 percent of the work was completed. In autumn the previous year, the museum was briefly opened for a $250 hard hat tour, but it became so popular that construction was stalled and the programme was pulled. The next date was August 2020, but the global pandemic halted that plan. Now it is set to open in summer of 2022. Fingers crossed.

What can you expect to see inside the Grand Egyptian Museum?

The dedicated site for the Grand Egyptian Museum is on the edge of the Giza Plateau. The futuristic glass and concrete structure is designed to offer panoramic views of the Great Pyramids of Giza, just 2km (1.2mi) away.

On entering the vast atrium of the Grand Egyptian Museum, you’ll be greeted by a colossal 9m (30ft) high, 83,000kg (182,983lb) statue of Ramses II, his left foot striding forward and fists clenched. On its journey to the new museum in 2018, the statue was allegedly accompanied by 11 horsemen in military dress and the sounds of the Egyptian national anthem.

Inside, the cavernous museum is expected to hold 100,000 artefacts, with around 20,000 of those displayed for the first time. The Grand Staircase will be lined with 87 statues of kings and gods, leading up to the main galleries including nearly 1ha (1.7 acres) dedicated to Tutankhamun. Expect to see 5,400 objects retrieved from his tomb, including his three gold-plated coffins and funeral mask, alongside all the relics displayed in the order Howard Carter discovered them in the tomb in 1922.

The galleries will be divided into four eras: pre-dynastic (up to 3100BCE) and Old Kingdom (the pyramid builders); Middle Kingdom; New Kingdom (Tutankhamun, Ramses and others); and Greco-Roman. Alongside the galleries, there will be eight restaurants, 28 gift shops, a 250-seat 3D cinema, a children’s museum and a sculpture garden. For general admission, Grand Egyptian Museum tickets will cost 400 Egyptian pounds (£18.50) per person with a 50 percent discount for students.

The museum supersedes the Egyptian Museum, also known as the Museum of Cairo, which was built in Tahrir Square in 1902. If you have visited this original museum, you’ll notice a definite leap from the 19th-century building to this state-of-the-art 21st-century extravaganza.

How to get to the Grand Egyptian Museum

The Grand Egyptian Museum has been designed to accommodate a flow of 5m visitors a year. It’s worth noting September to April are the prime months for tourism in Egypt, and it’s likely to be a popular stop for tour groups.

The museum sits close to the Cairo ring road, the freeway circling the metropolitan area of the city. It will be connected to the Cairo metro when the new line is completed. Conveniently it can also be reached by air: the new Sphinx International Airport is 20 minutes away and domestic routes make it accessible as an easy day trip from the Red Sea resorts.